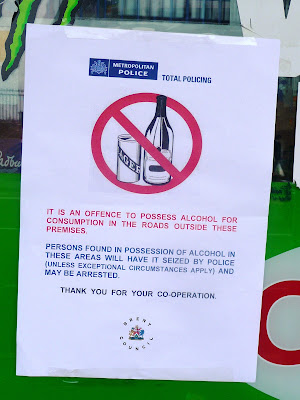 The ban on public drinking of alcohol for this weekend's semi-finals proved difficult to enforce today in Bridge Road, Wembley.
At 11.30am fans were openly drinking on the street and I asked several police officers what was happening with the ban.
One officer said that they could not possibly enforce it but could try and limit it to certain areas, so drinking was going ahead on the shops side of Bridge Road, where the crowds were, but the ban was being enforced on the Ark Academy side where mainly locals were walking to avoid the fans.
On the railway bridge officers stood by while drinking carried on but further down the road two officers were making fans pour the contents of their cans onto the pavement.
An officer told me that the Council could pass all the laws they like but it was 'impossible' to enforce with so many fans drinking.  A more senior officer said that it was crazy that drinking was banned on the pavements which belonged to Brent Council but allowed on Olympic Way which was privately owned. He said that it risked confrontation to make someone empty a drink on the bridge pavement, while below fans were openly drinking on the approach to the stadium. 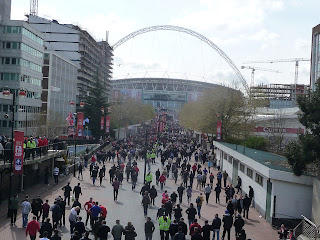 When I remarked that it seemed quiet and peaceful at present, he said the real test would be after the match. Meanwhile fans were leaving the area to claim their seats in the stadium and left their public drinking evidence behind. 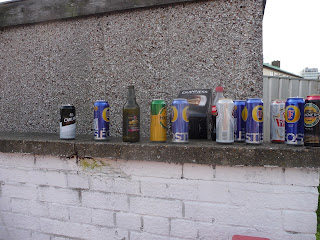 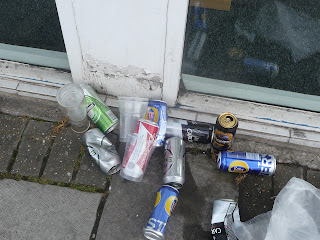 Another perspective was provided by a shopkeeper who said that his business had been affected by the ban. He relied on pre-match drinks sales for revenue to keep his business afloat and said because of the ban and the parking restrictions he was thinking of closing. Shops were told to close their off-licences one hour before the match. 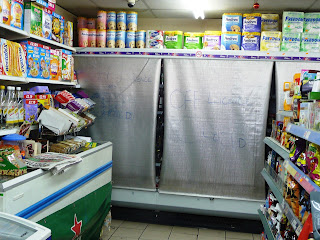 The shopkeeper was particularly incensed that ASDA around the corner was able to continue selling alcohol. He felt that the street drinking ban was introduced by Brent Council at the behest of Wembley Stadium where drinks are sold at exorbitant prices.
Posted by Martin Francis at 14:26:00