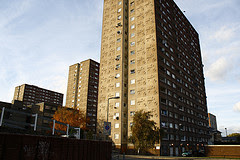 The press release from Brent Council LINK about the planned demolition of Bronte and Fielding houses on the South Kilburn estate reminds me of those government press releases announcing more money for some good thing or another, only for a journalist to discover that they announced the release of exactly the same money several months, or even years, previously.

The demolition of the tower blocks in South Kilburn was announced as part of the "Masterplan" for regeneration in 2004 (!). Like much else in the Masterplan, it has taken a lot longer to come to fruition than originally intended.

No-one should really object to the pulling down of 18-storey tower blocks and their replacement by six and seven- storey blocks. Apart from other problems, the tower blocks have been plagued by failing lifts, meaning residents often faced hauling themselves and possibly shopping, children and buggies up many flights of stairs, or, alternatively, being isolated in their flats because they couldn't face the long walk down.

But why has it taken 8 years since the publication of the Masterplan for this to happen, and what is happening with the rest of the regeneration of South Kilburn? What does it say about the housing situation in Brent?

From the start the Masterplan for the regeneration of South Kilburn had problems, not least that it was dependent on a deal with private finance whereby in exchange for knocking down some dwellings and building some social housing, they were also able to build dwellings either for sale or for renting at "market rents". One of the most ridiculous aspects of this is that the two storey blocks on Cambridge Avenue, perfectly sound architecturally, are to come down in order to build private flats. Surely nothing to do with the fact that these flats will be facing away from the estate and situated very close to the tube and Kilburn High Road? Oh, and those dwellings will have gardens, unlike nearly everyone else on the estate.

There were (and still are) other issues, such as that the South Kilburn area (slum housing until the estate was built) is already densely populated and the regeneration scheme makes it even more so, with an extra 2,400 homes planned. Some of the little green space there is in the area is to be lost.

Personnel issues have also dogged the regeneration scheme from the start. One of the earliest issues was the sacking of the independent "tenants' friend", apparently because he became too close to tenants in his criticisms of the scheme. Then the Chief Executive of South Kilburn New Deal for Communities and his deputy left following the revelation in 2008 that they had shared a two bedroom maisonette loaned rent free by Brent Council to the NDC to be used as office space. Allegations have constantly circulated about how "tenants representatives" on various bodies have become divorced from tenants' interests, and have merely become tools for the Council to push through it's agenda. As with other Brent consultations (regardless of who controls the Council) the concerns of residents have been brushed aside, whether at planning committee or exhibitions organised by the planners.

As elsewhere, tenants have also had to transfer either to Brent Housing Partnership or a Housing Association for the plans to go ahead. Unfortunately tenants' and residents organisation on the estate is too weak and fragmented to be able to resist this as has happened elsewhere. Certainly Brent Council, whatever political colour it's leadership, has never objected to having to use private finance or insisting Council tenants transfer. Indeed, they all seem to have welcomed this.

Does any of this matter? New homes are needed, and surely residents are pleased to get new flats or refurbished bathrooms and kitchens?

Of course, but what level of disruption balances that out? The constant building work, noise, dust, road closures etc over many years (and many more to come) do not make life easy. More than that, for instance, during one spell of building work residents were advised to keep their windows closed because of the dust and noise. Yet when, as a consequence, some flats developed mould, those who have bought their flats were told it was their problem and they would have to pay to get it fixed. A constant problem has been the lack of oversight by Brent Council over contractors and how they treat residents and their property. And that's all before they put the HS2 tunnel under the estate.

The people who will gain most out of the South Kilburn regeneration are not the residents, but the building firms. They will get lots of shiny new flats to sell at inflated prices.

The biggest losers will be those who rely on Council housing - the price of the private dwellings will be well above what the average resident of Brent - let alone South Kilburn - can afford, whether to rent or buy. And the overall number of Council dwellings is drastically reduced in the process. Just look at the figures in the Council's press release "229 new flats and maisonettes, ....... 103 of which will be allocated to South Kilburn tenants". This is a pattern reproduced elsewhere in the borough - the flats that it is proposed to build as part of the new Willesden Green Cultural Centr will sell at £300,000 each with no "affordable" housing at all.

This at a time when the Council's own figures show that around 40,000 (!) households will be affected by the government's attack on benefits, meaning in many cases that they will no longer be able to live where they do currently. yet the Council does not seem to see the connection between this and its willingness to reduce the amount of Council housing in the borough.

What Brent - as everywhere else in the country - needs is housing which people can afford and which is secure.

having lived in brent since childhood I can confirm that council housing in brent is of poor quality.
one persistent problem is flats and houses are often built with poor sound insulation and so when you live in a block of flats or terraced houses and people move chairs around in the kitchen or play loud music it can be very frustrating to have to put up with that day after day.
when I lived in rathbone house in the 1970s, my family were constantly disturbed by our neighbours above whose father was a heavy drinker and used to play fight with his son and wife and it would mke a lot of noise and my parents were constantly having to send me up to ask them to stop making noise but they just ignored me.
eventually we moved to kensal green and although things were less stressful...lately the noise problem has started again and it causes stress for my dear mother who is elderly and disabled and her neighbours are unreasonable so if she tries to talk to them they just flare up and refuse to listen.
so that is two long term problems in brent...poor quality housing and the people that live in them are often ati social and make live a misery for their neighbours.
and the council for their part add to the stress by failing to do its job properly...for example they take council tax from us then fail to make sure that the people contracted to the collect litter actually do the job they are paid to do...where i live in wembley the pavements and green areas are regularly used as make shift dustbins...so wehen you have a council that fails to do its job properly and residents that treat the area where they live badly it can only make life a misery for those of us that wish to live in a nice area where the council and residents are responsible...I certainly would not recommend anyone to move to brent...in fact it is a wonder to me that brent has been chosen to represent the olympics?
the area is full of tobacco addicts for a start and tobacco misuse and sport do not make a good partnership.
a borough in which the people take care of themselves and shopkeepers do not exploit people with health damaging things would be a better choice in my opinion.