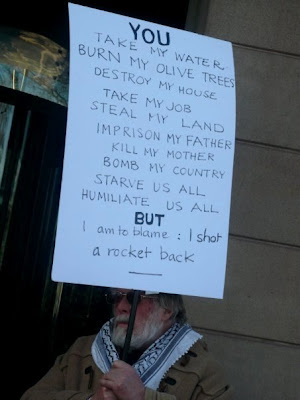 I joined hundreds of others at the demonstration against Israeli attacks on Gaza on Saturday. It appears that the attacks are as much about the upcoming Israeli elections and the need to exercise military muscle to gain votes as they are about rocket launches into Israel.

The Green Party has condemned the attacks.

Green Party International Co-ordinator Dr Derek Wall said: 'The Green Party deplores Israel's attack on Gaza.  There can be no peace in the Middle East without justice for the people of Gaza.  The attack which has killed many civilians, announced on twitter and widely seen as part of an election campaign is both cynical and sordid.  The Green Party calls for an end to violent incursions in Gaza.’

Israel has sought to justify the attack by arguing it was responding to rocket attacks on its citizens from Gaza by Hamas. The state says ‘more than 200’ rockets were fired, one of which killed three people, and wounded a four-year-old boy and two babies.

While The Green Party accepts that the conflict between Israelis and Palestinians is too complex to be regarded as ‘black and white’ it also notes that Israeli commentators and peace campaigners are despairing of their own leaders’ seeming unwillingness to engage in a meaningful peace process – the only way the senseless killing of civilians in Israel and Palestine can be brought to an end.

We also believe that in common with previous Israeli military acts, this latest attack – the most intense since 2009 – is out of proportion both to the activities Israel argues led to its response, and to the ongoing disputes between Israel and dispossessed Palestinians.

Dr Wall continued: ‘The conflict will only end when Israel is prepared to discuss a plan for peace with Palestinians. Violence only leads to more violence.  The killing power of Israel puts their state at a huge military advantage however without justice, the future of both Palestinians and Israelis is bleak.’

The Green Party notes with sadness reports that mere hours before he was killed in the latest missile attacks, Hamas military commander Ahmed Al-Jabari had received the draft of a permanent truce between Hamas and Israel.

And we hope other political parties, and people across the world will join us in our condemnation of the attacks, and call for meaningful, lasting peace in one of the world’s most violently, and tragically, disputed regions.

Dr Wall said: ‘We challenge other UK political parties to condemn Israel's violence and to support an inclusive process for peace and justice. Green Party members support the ongoing protests against Israel's military attack.'
Posted by Martin Francis at 08:18:00

oh right
so it's only when another nation show's little regard for the lives of others that we stand on the moral platform and point our fingers at those guilty of failing to treat the lives of fellow human beings as they would expect others to treat them?
how is it we stand by in silence despite the fact that 106,000 people in this country smoke themselves to death each year?
are the lives of Palestinians more precious than the lives of our own people?
don't get me wrong now, I'm not saying we should close our eyes to what others do to others throughout the earth, no rather what I am driving at is we in this country are hypocrites because while on the one hand we condemn other nations for showing no regard for the lives of Palestinians we show a similar disregard for the lives of our own people by permitting shopkeepers to hand over cigarettes in exchange for money which then slowly destroys the health and lives of those that smoke.
and what is amazing is that this meant to be a christian country and yet if we are predominantly Christian where is the evidence to back it up?
can anyone imagine the first century Christians (if they were still alive) going around preaching the word of God to everyone and then after opening up their shops to sell Cigarettes to the very people they were telling hours earlier to cleanse themselves of every defilement of flesh?
could you or would you take them seriously?
of course you wouldn't /couldn't and why not?
well because even you know that to say one thing today and then an hour later do something that causes the people you were preaching to do something that does not benefit them at all makes you a hypocrite.
and yet we in this country have an abundance of such persons in the clergy, in the government,and the list goes on and on...in essence what I am saying is that if we condemn others for doing something inhuman to a fellow human, we ought to make sure that we are not doing anything inhuman ourselves against anyone if we expect to be taken seriously.
also if we are Truly a Christian Nation (and I assure you Truthfully that we are not) then we obliged to live by Christian Principles.
and a nation that is Truly Christian does not send soldiers to invade the country of another nation on the basis of Looking for weapons of mass destruction while our government stands by reaping £10 billion from something that causes 106,000 people to die every year and that is just in our country.
so how can our government expect anyone to take them seriously when they are condemning those involved in causing bloodshed, they not allow bloodshed in their own country by means of smoking but they benefit financially from it too.
and yet this is meant to be a Christian and civilized nation...Christians are not meant to take part in wars because they obliged to love their neighbors and that does not only mean those that live next door to us, but even those that live in Palestine.
we are not showing them love if we draw guns on them and try to justify it by blaming Hamas for starting the war.
even if they started the war we as Christians (even though we are as Christian as Satan the Devil in reality) are meant to show Restraint, even if we lose our lives in the process because by restraining ourselves we are showing that we are Truly Christians rather than calling ourselves Christians and then doing things not associated with christian Principles.
What we are in reality is deluded Hypocrites.