Passport not sufficient ID to get into Brent Council meeting 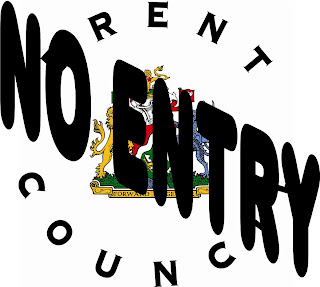 There was increased security at last night's meeting of Brent Council and a ticket system for getting into the building. When I arrived there was a small group of lobbyists outside from the Counihan Family Campaign and Brent Fightback. Brent Fightback had been giving out a leaflet making the case for the Council to set a needs based budget. Railings had been erected at the foot of the Town Hall steps and two police cars were in attendance.

When I asked if they were going to observe the meeting one of the lobbyists told me that the council meetings were so tedious and mind-numbing that she did not wish to go in.  Others however said that they had been denied entry by an officer from Democratic Services who stood at the door with a security guard. He told them that they were going to keep out the people who had caused trouble at the previous meetings. or who might cause trouble because previous meetings had been interrupted and they wanted the business of the Council meeting to be completed that evening.

The officer's action seemed particularly targeted at the Counihan Family Campaign but was applied in a blanket way to everyone who had been lobbying.. Three women who tried to get in were asked for ID in order to gain admittance. Carol, a retired TfL worker went all the way home to collect her passport and library card but the officer refused to look at it saying, 'We know you are part of the campaign' without saying which campaign.

I was granted admittance and a woman was also allowed in but only after she had to ask that the officer to ring  Carol Shaw, her local councillor,  to check her credentials.

When we eventually arrived in the public gallery we were the only two people in attendance with 50 empty seats and more on the floor of the council chamber.  After half an hour or so two young women joined us but soon got bored and went home. Ex- Democratic Conservative Councillor Robert Dunwell, who has his moments in the Town Hall, was happily trotting around the Council Chamber.

A further troubling aspects is the question of how the council has identified previous and potential trouble makers?  I have never been a conspiracy theorist but is there a list or photographic record? Does the council believe in guilt by association? If you are opposed to council policy does that make you a 'trouble maker'. Would library campaigners have been asked for their ID?


Brent Fightback at the Town Hall tonight, very unimaginative literature, looks like a member of the Brent Labour Party wrote it.

So a Labour Council bars entry to a group of people, some of whom are Labour supporters, who are advocating a policy supported by many on the left of the Labour Party as well as other socialist groups including Green Left,  as well as those supporting a Brent family suffering as a result of the housing crisis.  l Muhammed Butt,   leader of Brent Council went to speak to Brent Trades Union Council earlier this year at a meeting attended by many members of Brent Fightback. LINK  He stressed that he wanted to have a dialogue with them and return to 'what Labour stands for and why we are here'. Asked how he would organise a fightback against Coalition cuts he said:


Me being here is just a start. I am willing to go anywhere, whether to a warm reception or a hostile one, to have a dialogue.

Recently I attended an Extraordinary Meeting of Barnet Council where the Labour group had tabled a motion of 'no confidence' in the Conservative Leader of the council calling for him to be replaced. Feelings were running high but not only was the public gallery full but the council had provided seats in an overflow room with a television link. Officers from the council politely greeted us and showed us to the viewing room. There was some spirited heckling but the Mayor was able to keep things under control and a proper debate took place.

If a council meeting is advertised as being open to the public, then not only should the public be admitted but they should be encouraged to attend. In recent times, there has been a trend where large numbers Metropolitan Police and security guards have been present both outside and inside the Town Hall at contentious meetings. If members of the public disrupt a meeting, they should first be warned and then, if they continue, legitimately ejected. Heckling is something which any half-decent politician should be able to handle. If they can't, they should get themselves a job in a local library (if they can find one). Mel