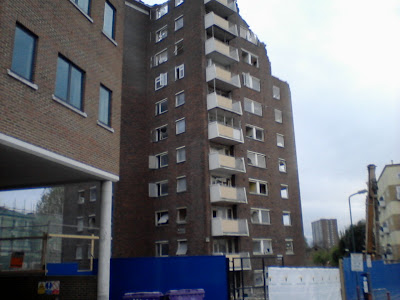 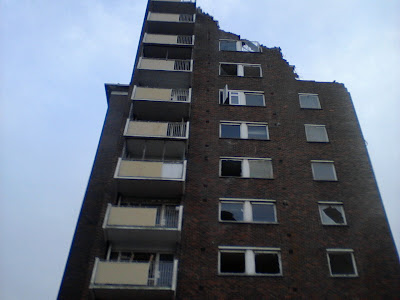 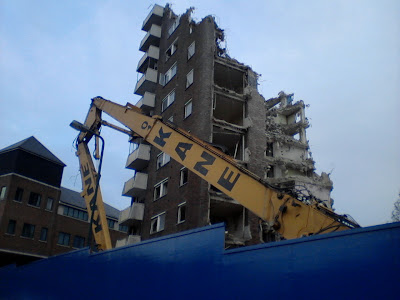 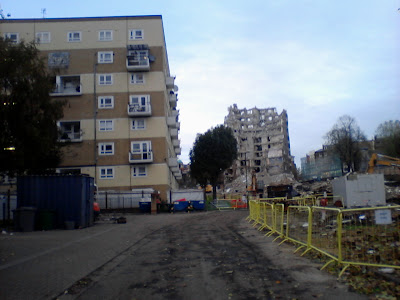 I had a look around South Kilburn Estate earlier this week with a resident. The estate is being regenerated which means demolition of tower blocks and their replacement by  low rise high density blocks and a consequent loss of some of the estate's green spaces.

What concerned me most was what  appeared to be little thought on the part of the developers of the health risk posed to developers by the demolition of the Wells Court tower block.

The well used Coventry Close link between Kilburn High Road and the estate was covered in a thick layer of dust from the demolition.  There was no safety netting up to stop debris landing on the roadway or hitting pedestrians, On the other, posher,  Cambridge Avenue, side of  Wells Court, there was a 6 foot hoarding up and a much higher mesh netting fence on the north side of the Avenue.

With Health and Safety under attack from the Daily Mail and its Tory allies this is a clear example of the importance of health and safety and the need for local authorities to enforce the rules. This development, funded by Brent Council, is clearly their responsibility and they need to take swift action to ensure residents' safety.

At the very least safety  fencing and regular washing down of dust covered surfaces should be measures required of the contractors by the Council.

Thanks Martin. After complaints there is now some netting on the Coventry Close side, but no attempt to clear up dust, which is, of course, getting thicker by the day. What's worse, when demolition was going on this afternoon one of the workers was in Coventry Close urging people to walk on the side furthest from the demolition (where, incidentally, there is not pavement). If there is a danger then the road should surely be closed.