Swaminarayan to bid to become a free school 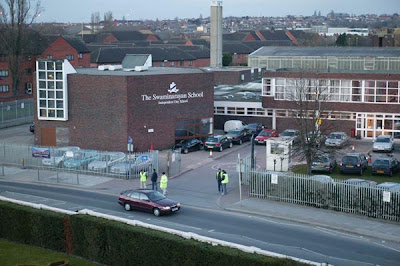 The independent, fee paying,  Hindu,  Swaminarayan School in Neasden is considering becoming a free school. The school for 4-19 year olds currently charges between £2,600 and £3,600 per year according to the pupil's age.  A few scholarships are available for those unable to afford the fees. The Swaminarayan is rated as one of the top performing independent schools in London and emphasises the 'best of English education combined with Hindu tradition'.

The Swaminarayan School was founded in 1991 and is housed in the former Sladebook High School building in Brent field Road, opposite the Swaminarayan Mandir.


In order to qualify for entry, a child must reach a certain academic standard in the Preparatory School entrance examinations in English and Mathematics. He/she will have to pass an oral and written examination. Although Kindergarten/Nursery children are not tested academically, an informal interview is arranged between the parents, Head of Nursery and Head of Preparatory School. Assessments of the following areas will be carried out: child’s spoken language, vocabulary, nursery rhymes, ability to listen to instructions, solving simple puzzles, social skills and hand-eye co-ordinations are carried out

Free school status would mean that the school would become directly funded via the Department for Education. It was the first 'all-through' school in Brent combining primary (or Prep as the Swaminarayan call it) and secondary departments, and was followed by the Ark Academy and Preston Manor.  I doubt that the school could keep the admissions procedures if it becomes state funded - nor should it.

I understand that some parents are concerned that direct funding would result in class sizes becoming larger and I am not sure whether the regulations allow for some residual fee charging to enable school class sizes to be retained.  Parents, particularly those with several childrem, will save a considerable amount of money if the bid is successful.

I asked the Principal to comment on the reports about a possible free school application and also on rumours that the school might buy the neighbouring Centre for Staff Development when Brent Council vacates it next year.

The Swaminarayan School is considering applying for Free School status. Whilst we have not found a site, we would wish to locate to a site in the heart of the Hindu community. The excellent education that the school provides at present will be open to all.

There were rumours several years ago when Brent Council was looking for school sites that the Swaminarayan may move to Harrow but these reports were denied. Brent is expecting a shortage of secondary school places in the future as the swelling primary school population moves through the system.

Brent Council has decided that it will actively seek free school partners to address the shortage of school places.

There are a considerable number of small fee paying prep schools in Brent that might consider a similar move.  St Christopher's in Wembley upset parents a few years ago when it announced at short notice that it would be unable to run a Year 6 class the following academic year because numbers were not viable.

The Swaminarayan School boasts a fine history of developing students with great grades, a strong ethos and moral compass.

If it were to become Brent's first Free School, this would be a positive move for the borough. Whilst I am against the idea of Free Schools, I do believe it is a better alternative than the current Private School model that exists at TSS at present.

Although its a positive move for the borough, i would be very interested to see how many students attend the school which sit outside of a Local Authority Catchment criteria, based on the current location. We went through the entire process of viewing schools, deciding on a wishlist to find that our daughter doesn't have a choice. we decided on TSS its only been 1 term.
I believe class sizes will increase, Control will be lost especially on the admission process.
Not sure if im correct in saying this, parents have opted to send their children to TSS because of the 'fine history of developing students with great grades, a strong ethos and moral compass' The formula is right! Understand it might not make commerical sense, the costs against expenditure etc. How are other independant schools able to tackle these problems in the current economic climate?

Does anyone knows the criteria for scholarships at the school.german swami

Surprised a school is around in todays day and age that is independant and small yet has absolutely no regards for the children within. The children are either spoon fed knowledge have no incling of how to develop creative thought and are extremely ill mannered in a way i do not understand. The priorities of both the children and the school are wrong, if a child struggles in any way they will NOT help the child and if your child excels they will not nourish your childs brain but just let them 'slide by'. I feel deep remorse for the children going there and hope they at the very least move in 6th form which i must say is extremely medievel and poor especially when compared to other state/grammer schools. I am writing not only having seen the effects the school has given but having gone there myself as a child- thankfully left but seeing the outcome to other children there.

I absolutely agree with your comment, having studied there myself I feel the senior management have no idea how to treat their pupils in the correct way and will never in my life send my kids there. The school is rubbish at providing motivation to struggling students and instead they would downgrade them and make them feel like they are useless. I am shocked that the school has the same useless senior management as when I had left it years ago. There must be something that can be done to get our voices heard, but all hopes are blocked because the school is confining to the ways of the religion. I feel sorry for the struggling students who are trying their best in this school but are not having their efforts recognised.

I do not agree with this at all and would challenge you to visit the school for a day and try to prove any of these points. Senior management has seen considerable changes over recent years. More able and gifted children are catered for daily and the school has been recognised for this. Less able children are equally as catered for through interventions, parents evenings and workshops. The children's achievements are regularly celebrated with pride. There is a lot of love and care within the school which cannot be disputed. I personally refer to the Prep school as I only have experience of this at present.

Very concerned about the above comments and would expect the school to comment on this.

Ignore above comments. It is probably made by a failed students parents. My son goes here and it is proving to be a very positive journey. Class size only 15 and plenty of improvement.