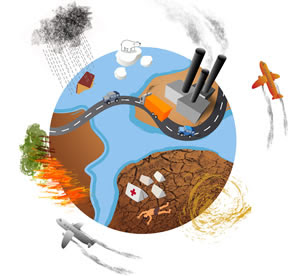 As often happens at the weekend  I am torn about which of the several events happening Saturday  I should attend. The Counihan Family March takes place in Kilburn High Road at 1pm, the Chalkhill Community Festival from 1-4pm and a crucial conference on the future of primary education is being held in Lambeth. All these events are important and worth supporting.

The Campaign Against Climate Change March in taking place in Central London. The threat posed by climate change is huge, so huge that it is almost impossible to comprehend its impact, and therefore so tempting to turn to something more manageable. It is almost like knowing we our all going to die eventually - too difficult to really take in so we ignore the inevitable and carry on living day to day because worrying about it will do no good.

Well, I believe we can do something, although the window of opportunity is shrinking rapidly. We have to shout from the rooftops about the issues and demand action from governments across the world. Tomorrow's march is a tiny part of that campaign.

Reasons to march tomorrow:
Whatever the outcome of the UN talks in Doha, we have to step-up the pressure on governments to take the necessary action NOW to limit climate change.


NATIONAL CLIMATE MARCH  DECEMBER 1st
Assemble 12.00 noon in Grosvenor Square
or
Join the Brent contingent at the entrance to Willesden Green tube at 11.15am

12.00 -1.30 Assemble Grosvenor Square and build the "Grosvenor Square Keystone pipeline" from the Canadian High Commission to the US embassy !
1.30 - 3.30 March to Parliament
3.30 - 4.30 Build a giant mock fracking rig outside parliament !