Never mind the polar bears, what will WE eat? 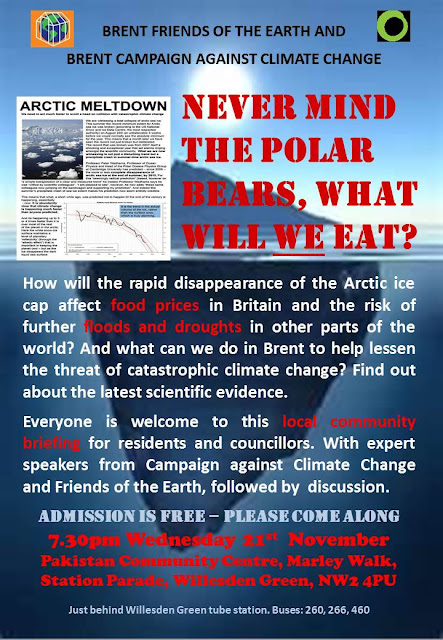 A meeting on the rapidly melting Arctic ice cap and implications for Brent residents will be taking place at the Pakistan Community Centre in Willesden Green on Wednesday 21st November.
The purpose of the meeting is to brief councillors, policy-makers, trade unionists, and community leaders on the seriousness of the situation and its possible consequences for people in Brent. The meeting, ‘Never Mind the Polar Bears, What Will We Eat?’, is being organised by Brent Campaign against Climate Change and Brent Friends of the Earth.
The speakers will be: Phil Thornhill, National Co-ordinator of Campaign against Climate Change, who will review the latest scientific evidence of the depletion of Arctic ice and its possible effect on the world’s weather systems; and Kirtana Chandrasekaran, Campaigner in  Land Use, Food and Water Security from Friends of the Earth, who will talk about the vulnerability of the world’s food supply.  They will also answer questions and open a discussion on what further action we should be taking in Brent.  The meeting is being chaired by Tariq Dar, Chairman of the Pakistan Community Centre.
Recent reports show that 70% of Arctic sea ice has melted since 1980 [1] and that there will be no Arctic sea ice in the summer months by 2016. This is likely to have a serious impact on world weather patterns, affecting the price of food internationally and increasing the vulnerability of regions of the world already prone to droughts and floods. Some of these regions will be those in which members of the Brent community have family and friends.
Ken Montague, Secretary of the Brent Campaign against Climate Change says:

The melting of the Arctic is a wake-up call to all of us about the urgency of tackling climate change while we still can. This meeting will present the latest scientific information and discuss how it will affect us here in Brent and the people we may know in other parts of the world. We believe that the seriousness of the situation means that we have to assist Brent Council to develop a community response, both in terms of measures we can take locally, and by raising our concerns with our representatives in Parliament.

People may know the ice caps are melting, but believe that if it’s so serious then surely somebody else must be taking care of it. But Governments worldwide don’t think beyond the next election, so no one IS planning for the immense repercussions of drought, flooding and food shortages we face in future years. I hope that this meeting will galvanise Brent residents and councillors to put pressure on those in power.
It’s like the Butterfly Effect.  Melting ice affects the Gulf Stream which brings warmth to the UK - and we all saw how our Jet Stream got stuck this summer bringing weeks of rain.  The price of apples and pears has already increased due to the resulting shortage – my pear tree produced a tenth of its usual harvest.

The meeting will take place at 7.30pm on Wednesday 21st November at the Pakistan Community Centre, Marley Walk, Station Parade, Willesden Green, NW2 4PU (just behind Willesden Green tube station).  This is a free event and all are welcome.
Posted by Martin Francis at 19:57:00