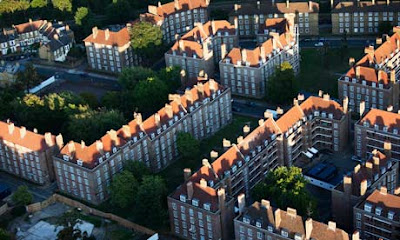 This is an extract:

There is no doubt that housing in London is far too expensive, whether you want to buy or rent. The Mayor says this is because we haven’t built enough homes, and that building more is the single-most important thing we can do. But my evidence shows that we are unlikely to make housing affordable through supply in the next decade, meaning continued pressure on house prices and rents. Other solutions therefore have to be looked at.

Government figures suggest we should have built more than half a million homes in London since the GLA was set-up in 2000 in order to keep up with a growing population and rising demand. In fact we built half as many.

Combined with irresponsible lending, this sent prices rising two to three times as fast as incomes. Prices are now so high that:
·   Half the population is unable to buy three quarters of the homes in London, with housing increasingly bought by investors rather than owner-occupiers.
·   Minimum wage workers can’t afford to rent the average room in a shared flat in any borough in London, and they struggle to get social housing as the stock has shrunk.

If supply were the main answer, the Mayor could push for two options:
·   Flood the market with enough homes to make house prices fall by at least 40% overnight to affordable levels.
·   Build enough to keep prices flat and wait up to 30 years for incomes to catch up with prices so that homes are affordable again.

Given our track record in the last decade, the current scarcity of mortgage finance, constraints on land supply and the shortage of people able to affordable any newly built homes, it is unlikely that private developers will build enough homes in London to achieve either of those options. Even if we kept prices flat, we can’t leave people stuck in overpriced and insecure private rented housing for 30 years while their incomes catch up.

For these reasons, I believe the Mayor needs to consider other solutions in addition to supply. Here are just a few other ideas that think tanks, academics and campaigners have put forward:

·   Constrain demand by putting controls or extra taxes on overseas investors and second home owners, or even by putting a tax on all land values to dampen speculation and stop developers sitting on large, unused land banks;
·   Give councils an incentive to release land for housing with community land auctions;
·   Build more social housing that can stay affordable regardless of supply and demand in the market, which would require either a dramatic increase direct subsidy, redirecting the Bank of England’s quantitative easing programme into housing, or freeing up councils to borrow at prudential levels.
·   Give private tenants continental-style rent controls and protections to slow the rise in rents and give people more stability than the current minimum of 6 month contracts.

Some ideas, such as taxing and auctioning land, are long-term policies to restructure our housing market and improve the level of supply. Others, such as rent controls, could also help tenants struggling with high housing costs today while we wait for supply to catch up.

Darren has published an article on Left Foot Forward elaborating his argument:
Posted by Martin Francis at 19:06:00

Any government that really engineered housing supply to match housing demand would find that prices dropped by 40%-50%, so that prices matched long-term established ratios to income.

That would throw such a goverment out of office!

what the councils need to do is Listen to what people say when they move into the havens of torment they are forced to live in.
I'll never forget the torment I went through while living on chalk hill estate
it was comparable to a never ending nightmare or driving along a road with endless bumps...in other words it was horrible.
and to think when Chalk hill was first built it was haled as something special even requiring approval to be allowed to live there.
if you look at photo's from the early days before it was neglected by the council it looks nice but that proves the saying to be true that all that glitters isn't always gold.
and just as the authorities allowed chalk hill to become run down,likewise they have done the same with the smoking problem in this country.
because it is a never ending source of tax revenue and profit for the people behind the cigarette business this is why the government gave their approval to permit people to smoke.
and even when they were warned that there is a link between smoking and lung cancer, they simply ignored it because they were blinded by greed.
and now thanks to the rulers of this country 106,000 people die every year from lung cancer.
and in the mean time the pavements of Brent resemble one big Ashtray and Dustbin for empty cigarette packets.
now if The government and local authorities will allow that to happen, is it realistic to expect that those HYPOCRITES would be able to provide decent homes for people to live in?
if they will cheat us by misusing the MP'S expenses system then you can be certain they will neglect to give us decent homes.
This is why I would NEVER EVER VOTE AGAIN FOR ANY POLITICAL PARTY.
I don't care how caring and sharing they claim to be...to me it's all a front and a typical method used by Crooks in suits to get into Number 10 and the heart of Corruption aka the houses of Parliament.
the estate which is now run by Metropolitan housing Trust Is a Chalk hill Estate part two.
it has all the flaws that made The original estate A haven of Torment.
such as inadequate sound proofing material so that people can live in peace and not get on each others nerves when they move around.
also the poor quality of workmanship is clear to be seen.
clearly showing that once again the authorities didn't listen to the complaints from the people who suffered ( not lived) on Chalk hill estate.
and as always they make a big song and dance using words like "regeneration" which sounds all exciting etc but when it comes down to it it just means more cheap poor quality lousy so called housing for the long suffering public.
they will never get it right...they are only experts at exploiting people for profit and turning what should be our home into a haven of torment.