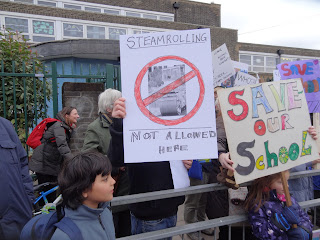 Cllr Krupesh Hirani, lead member for Adults and Health, has become the second Dudden Hill councillor to back the Parents Action Group at Gladstone Park Primary.

In a meeting with representatives from the campaign he stated that 'enforced academy is wrong' and 'we think Gladstone Parl doesn't need to become an academy'.

He agreed to write a letter in support of the Save Gladstone Park Primary School campaign for dessmination and he also signed the parents, carers and friends petition.

Parents finally requested that Cllr Hirani ask Cllr Muhammed Butt (leader of Brent Council) to instruct  Christine Gilbert (Brent Chief Executive) or any other relevant Brent officer to write to DfE stating (a) that DfE’s is in breach of Civil service Codes of Conduct and acceptable behaviour in making decisions that impact on the general public and (b) that Brent is confident in GP leadership successfully seeing through improvement action plan in response to Ofsted report, without change in governance status. In this regard, Ofsted Principal Officer Deana Holdaway’s response to Sarah Cox was quoted: ‘The judgement that leadership and management are not inadequate is an important one; it shows that staff have the capacity to continue the school’s improvement’.

In response Cllr Hirani said there was a distinction between Council and councillors and he would seek advice before making such a request.
Posted by Martin Francis at 11:04:00