Whose schools? OUR schools!

Today's news in the Independent LINK that Michael Gove is looking to privatise academies and free schools, and thus open them up to profit-making comes as no surprise. It would also decouple them from Whitehall removing any semblance of democratic accountability which has  of course already been lost at the local level.

Anti-academy campaigners have always thought this was the long-term intention. Why else would carpet millionaires and hedge fund speculators be interested in running schools? Cleverly getting their foot in the door at an early stage,  academy chains will be in a position to harvest the profits from seizing community assets.

It is not just the bricks and mortars and land, paid for by taxpayers over many years, sometimes going back to the introduction of universal elementary education in 1870, that is important. It is also schools as a site for community solidarity and values beyond those of individualism and private profit that is being destroyed,. In essence it is another battle in the war against social solidarity and the welfare state, the post-World War 2 settlement, that is taking place.  It is an ideological attack where the proponents will accuse opponents of being ideological. George Orwell would recognise the technique.

In 1986 Michael Joseph and then then Department of Education focused on the individual aspirations of parents for their children. They promoted what could be seen as the 'ideal' parent and argued that establishing a market in education would benefit individual parents as consumers. Back then phrases such as 'wanting what any decent parent would want for their children' , 'hardworking motivated families' were used to try and recruit parents as ideological partners in pursuit of free market solutions to what was percieved as the education crisis.

Their plans were challenged at a practical level when parents at Drummond Middle School in Bradofrd organised a campaign against the alleged racism of headtecher Ray Honeyford. Margaret Thatcher showed where she stood by inviting Honeyford to an education seminar at Dowing Street. Drummond Parents Action Group took to the streets  to protest. The Tory subtext was that the 'ideal parent' did not include ethnic minorities. 'Parent Power' was only for those who accepted the Government agenda? Does this soubnd familiar?


But be warned - for a Government that is so keen to encourage parental participation in education, he (Sir Keith Joseph,  Gove's equivalent at the time) is remarkably reluctant to answer parents' letters.

The Inner London Education Authority election of 1986 was unique because the Greater London Council having been abolished by Thatcher it was an election ONLY about education.  Several activists from the parents' movement stood as Labour Party candidates with experience in the Camapign for the Advancement of State Education (CASE), National Association of  Governors and Managers (NAGM), Save ILEA Campaign, Wandsworth Association of School Parents as well as local Parents Advisory Committees.

The Tories used the election to put forward their right-wing, privatisation ideas as a rehearsal for the next General Election. The result was a thrashing. On a relatively high turn-out, considering this was a direct election only about education in a city with many non-parents, of 44%, Labour achieved 46,8% (45 seats), Conservative 30.2% (11) and SDP-Liberals 21.2% (2).  Thatcher then punished the voters by abolishing the ILEA and handing education over to the boroughs, However the election result contributed to the  Tories moving to the centre ground in education. Michael Joseph was replaced by Kenneth Baker.

Gove's policies on privatisation, academies and free schools represent a move back to the days of Thatcher, Tebbit and Joseph (known by some as the 'Mad Monk') and we need to mount a similar challenge against his ideas and policies.

Is there a potential for a 21st century version of the All London Parents Action Group?

In the building of such a group the slogan Whose Schools? OUR Schools  should be central. We are not talking only about the selling off of public assets but of them being given away to the private sector. It is our taxes and council taxes that have funded our schools, but even more fundamentally the investment of the time and effort of generations of unpaid governors and parents that have made them the successful inclusive institutions that they are.

Fund-raising at Spring, Summer and Winter Fairs, volunteering in the classroom, accompanying classes on trips, regular contact with the class teacher are all ways that parents make it 'Our school'.  It is this closeness and identification with the school that make parents, grandparents and carers a potentially formidable campaigning force.

More and more is expected of the governing body who are expected to oversee the financial management of the school, set targets for school improvement and performance manage the headteacher. They are expected to go on training, attend conferences, and visit the school regulalrly to see it in action. 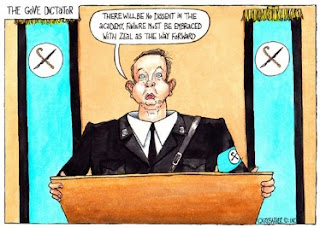 Michael Gove's forced acdemisation tramples over the efforts of parents and governors, devalues the contribution that they have made, and through his threat of replacing non-compliant governing bodies with Interim Executive Boards flies in the face of democracy.

Make no mistake we are in a fight for control of our schools,  for the future of our children's education and well-being, and for an ethos that values social inclusion, equality of opportunity and democratic accountability.

Let the battle commence to reclaim OUR Schools!