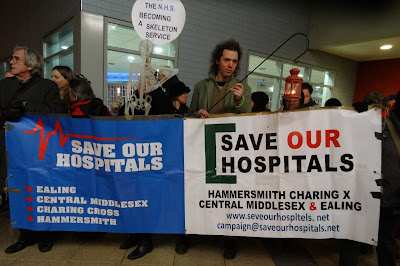 Campaigners marked the beginning of the Week of Action to Defend London's NHS with a candle lit vigil outside Central Middlesex Hospital tonight. The Central Middlesex A&E is threatened with closure under the Shaping a Healthier Future proposals. People from Brent, Ealing and Hammersmith and Fulham joined in the vigil. Sarah Cox from Brent said that it was important that people across the three boroughs stayed united to guard against any attempts at divide and rule.

On Tuesday February 19th NHS NW London will be meeting at Central Hall Westminster to make decisions on the closure of A&E departments and many other services at Central Middlesex, Ealing, Charing Cross and Hammersmith hospitals. There will be a demonstration outside Central Hall from 8.30am.
Posted by Martin Francis at 19:30:00