Never mind your heritage - get excited by the shops! 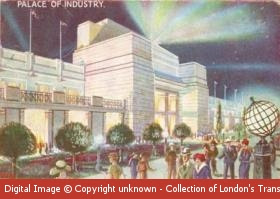 It seems that we are likely to see the last remaining relic of the British Empire Exhibition, the Palace of Industry building in Olympic Way and Fulton Road, demolished within the next couple of weeks.

Quintain Estates advised me on 14 February that they intend to go ahead with the demolition before their planning application for 1350 temporary car parking spaces on the site goes before Brent's Planning Committee on 13 March. They can do this, as Brent gave them permission as part of the overall scheme for Wembley City some years ago.

I had asked them to allow the east and north external walls to remain standing until the main redevelopment of the site for a shopping centre goes ahead in several years time. This would not stop them from having all of the car parking spaces they require to fulfil their commitments to Wembley Stadium, and would allow visitors coming to Wembley Park for the 90th anniversary of the British Empire Exhibition in 2014 to see the scale and style of the last of these iconic buildings. They claim it would be unsafe to do this, but have ignored my request (four weeks ago) to have sight of their evidence.

It was intended to ask for the retention of the walls to be made a condition of granting planning permission for the temporary car park. It appears that Quintain Estates have decided not to take that risk, so that the demolition will already be a "fait accompli" when the Planning meeting takes place. As a concession to the proposed BEE 90th anniversary exhibition, which it is hoped will be held in the new Civic Centre in the summer of 2014, Quintain have said that they will give Brent the lion's head corbels from the building.

When I suggested to the Quintain representative yesterday that it might be better to co-operate with local people and Brent Museum and Archives on this matter before sending in the demolition team, I was told they 'hope that the excitement about a new cinema for Wembley, with shops and restaurants accessible for all plus 1500 new jobs will outweigh any "bad publicity".'
Posted by Martin Francis at 16:29:00

Almost every bit of Wembley history has been obliterated - to name a few we've lost the old Wembley Stadium, lots of other Great Exhibition buildings, the Guinness Brewery and loads of local pubs, including The Chequers in Alperton which had been in place since the 1760's.

All we have gained are thousands of horrendous looking flats and more and more betting shops - yet another one is opening in Wembley High Road where the Gamestation shop was.

How is this allowed to happen?