Will Duckworth: Green Party needs to build links with unions to fight injustice 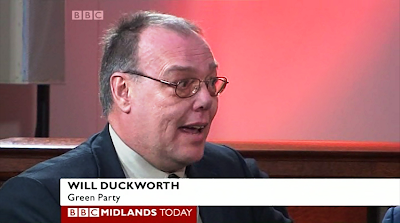 
The Green Party’s deputy leader Will Duckworth has called for stronger links between politicians, the general public and unions to fight workplace injustice.

Mr Duckworth spoke out after attending a demonstration against a series of forced redundancies at Halesowen College, which is close to his home and the area he represents as a Dudley Metropolitan Councillor.

Governments in the last 30 years have been working hard to try to destroy unions, and the result is that it’s now too easy for management to bully individual employees, who don’t have the protection they need and deserve. Standing up for workers’ rights is vital, especially during times of economic downturn when increasingly desperate employers look for ways – some of them unfair – to reduce outgoings including wages and sick pay.

The current government is working hard to destroy the collective bargaining power held by unions – one of the only ways employees can safeguard pay and conditions, including basic rights to safety in the workplace. Only by standing together can we protect these basic, necessary rights.

Mr Duckworth joined union members and members of the public to protest against the dismissal of four Mathematics lecturers from the College. He was one of more than 12,000 people who signed a petition calling for the reinstatement of the lecturers.

They also expressed concern about the way the redundancy process has been handled by the College.

We’re very concerned that the proper disciplinary processes haven’t been followed: if the College was unhappy with the lecturers’ performance, it should have issued them with notices to improve before taking this very strong action.

He added that he hoped to build stronger links between the Green Party and trades unions.

My attendance at the demonstration was to show support for workers who I believe may have been treated very shoddily. It was also to help to build links between the Green Party and trades unions, so we can work together in future to combat and prevent such injustices.