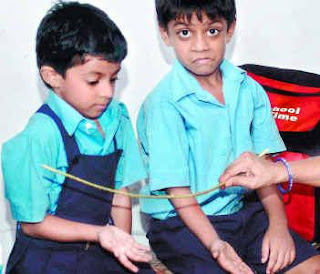 The lofty, superior and high-handed attitude of 'Big Sister' at the DfE can be seen in her latest letter to the Gladstone Park Primary Chair of Governors.

The letter written by Caroline Cane of the Brokerage and School Underperformance Division (now there's a friendly child-centred name for you) is notable for taking a swipe at the National Governors Association:

Firstly, I would like to make it clear that the National Governors’ Association (NGA) guidance mentioned in your letter is not statutory

As an independent body, the NGA’s views and advice do not necessarily reflect the Department’s position on how Academy sponsorship is brokered

So it is not only the governors at individual schools that are ignored but also their National Association. Remember, these are unpaid volunteers who give up hours of their time and despite the DfE's disdain are held accountable for the strategic and financial management of their schools with an ever-increasing workload. It is hard to discern any respect for this in Ms Cane's missive.

She goes on later in her letter:

That is a wonderful definition of consultation. If it applied to the NHS the surgeon  could 'consult' with you about amputation after she had removed your leg!

It is clear the Big Sister always knows best:

Where a school is underperforming and eligible for intervention, it is not the case that schools are usually given a choice of sponsors. The Department leads on identifying potential sponsors as we have the complete view on individual sponsor's capacity and capability to deliver.

On the possibility of an arrangement with Queens Park Community School via the Cooperative College her remarks have a sting in the tail:

The Co-operative College is not an approved Academy sponsor and our records show we have not received an application from Queen’s Park School .  As a secondary school wanting to sponsor, its GCSE performance and Ofsted judgement would be taken into consideration.  It would also need to demonstrate that it has experience and a proven track record in working with and improving primary schools.  I note that in 2012 the percentage of pupils achieving 5+ A*-C GCSE’s including English and maths at Queen’s Park was 53%.  This is a drop of 9% percentage points compared to 2011 and means it is currently performing below the national average, so this school faces a number of challenges of its own