The Budget Report going before the Brent Executive on February 11th recommends no change in the barometer Band D Council Tax and little change in the other rates.  This decision contrasts with early budget documentation that built in Council Tax rises over the next three years.  Since then Eric Pickles has declared that rises above 2% have to be approved by a local referendum and attacked Councils who were considering raising the tax to protect services. His mix of bribery and threatened opprobrium seems to have done the trick.

Brent Housing Partnership tenants will pay an average rent increase of 3.74% and there will also be rises in service charges. The table below shows that almost 4,000 households will face an increase of nearly £5 a week or £250 annually raising an additional million pounds.  Hillside Housing Trust (Stonebridge) rents will rise by 3.1% on average.

The new approach to social housing is explicit in the report's comment from the Brent Housing Partnership:


BHP agrees with the recommendation to increase rents on average by 3.74%. We recognise that this will place an additional financial burden on the 32% of Brent Council tenants that are currently are not in receipt of housing benefit. However BHP recognises that Brent is now operating a self financing housing business and that this increase is necessary to ensure the success of the Council's business plan. 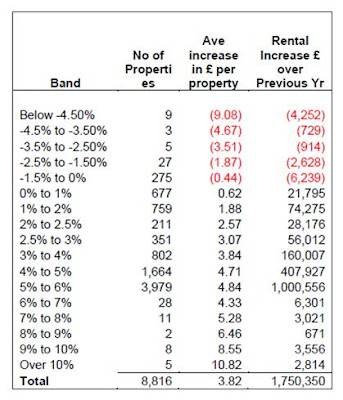