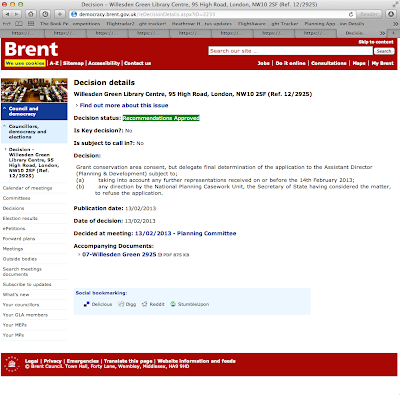 Their worse fears seemed to have been realised when Brent Council sent out a message overnight saying that the Planning Committee had yesterday approved the two applications - despite the Council having previously announced that the decision had been deferred to a Special Planning Committee on February 21st for 'technical' reasons'.

A call to Democratic Services early this morning elicited the response that the release of this announcement had been a mistake and that the application hadn't been considered last night. The announcement was quickly removed from the website.

Doesn't look the model of efficiency does it - not to mention the number of heart attacks it might have caused at breakfast time in Willesden Green?