Parent spills the beans on life under Harris 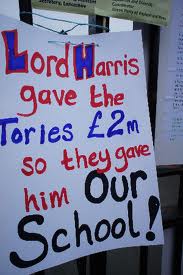 A parent from Roke Primary School in Croydon which is being threatened with having Harris imposed as a sponsor posted the following worrying account. Harris have several academies in Croydon and appear to be embarked on an empire building exercise aided by Michael Gove and the Conservative Party. Presumably they look forward to converting taxpayers' money into profits for themselves when Gove frees them to make profits.

From a parent in another Harris Primary school. I asked "How are your kids finding the school now? You ever thought about moving them?" ..... the reply: "I've got to say yes. Before Harris took over the atmosphere was calm and behaviour always good (always praised by Ofsted). The discipline now is much harsher. There's constant telling off and seemingly random punishments - not in line with their own policy. School uniform is constantly picked up on e.g. kids having a logo on their PE jogging bottoms. There's testing every six weeks and the reports that Harris promise you every half term are just a print out of NC levels from the tests. The extra Harris resources we were promised (school improvement teachers) are just being used as classroom teachers to cover the vacancies. Harris will of course promise you the world ...."