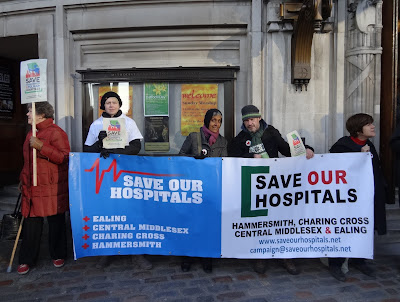 Hospital campaigners from Brent, Ealing and Hammersmith and Fulham assembled at a chilly 8.30am today outside the Methodist Central Hall, Westminster in the shadow of Parliament's Victoria Tower. They were protesting against Shaping a Healthier Future plans to close A&Es at Hammersmith, Charing Cross, Ealing and Central Middlesex Hospitals.

Their pleas were ignored just as were their letters, petitions and marches and the Trust went ahead and voted for all four closures.

Campaigners warned that the decision will hit many of the area's most vulnerable residents and could result  in life threatening delays for urgent treatment.

The ITN report on the demonstration and decision can be found HERE
Posted by Martin Francis at 12:21:00

I am pleased the A&E departments are closing, for ambulance cases. The clinical arguments have won.

However, it is essential that politicians turn their attention now to the ambulance service, with paramedics in all London ambulances, because that is the other half of the new, better system.

A paramedic can treat you at home, and then take you to a stroke hospital, a heart hospital, or to a general A&E.

The extra road journey time does not matter, compared to reaching a bigger, specialised, more experienced medical team. You are more likely to stay alive, and that outcome is already clear in the already-set-up specialist stroke hospitals across London.

So 'baarnett' is pleased A+E is to be closed to ambulance cases. The claim that, apart from strokes and heart attacks, the extra road journey time does not matter is surely wrong. What about head injuries from road accidents and falls, accidents that result in serious burns and blood loss?

Presumably 'baarnett' isn't concerned about people (including children, elderly or disabled) who will have to struggle longer and more expensively with public transport to get NHS treatment at a time when they are particularly anxious, worried and in pain.

Why has anyone got to struggle longer and more expensively with public transport to get NHS treatment? It is ambulance cases that are being diverted. Anyone who uses public transport with serious injuries or an emergency should have called an ambulance.

And burns cases may well be best treated by being taken by ambulance directly to a burns hospital. It should be up to the paramedic on-board the ambulance to decide, no doubt with consultation over the radio.

Having specialist hospitals is a better system - but it does rely on an excellent ambulance service.

I have no link whatever with the NHS, so have no axe to grind.

It is true that visitors of patients may well have to struggle for longer and more expensively with public transport to reach someone in hospital, but that is small-fry compared to the greater survival rates, and better outcome for the person you are visiting.

There are still plenty of chances to mess up this new system if money does not go into it. It could have happened while Mr Blair was increasing the budgets every year, instead of now.

Baarnet - you obviously have no idea what the Urgent Care Centres (UCCs) that replace A&Es will offer. They only deal with MINOR injuries and illnesses so not only do they do not accept blue light ambulances but they also have a lot of other limitations. Of course many people will not realise this but (as they already do) make their way to the nearest place where they think they can get help. Anyone very seriously unwell will then require a 999 ambulance to transfer them to an A&E department, or if there is not an immediate threat to their life they may have to wait a very long time in an environment that is not appropriate, for an ambulance to take them to A&E (also see below re: ambulances).

In addition many patients already attend UCCs with problems that would be SAFER to be seen in A&E as they may have chronic and severe underlying health problems (increasingly common as people generally live longer) may need urgent blood tests, other investigations, potent medications or a period of observation in order to be SAFELY discharged home. UCCs are not set up to do this, A&Es are. So you may well attend a UCC but then have to make your own way to an A&E department that is now much further away with all the attendant delays and expense attached to using public transport or an even more expensive cab – even if you have your own transport many hospitals do not have parking or it is very expensive. When you get to the A&E they will likely have much longer waiting times due to the extra workload they will be dealing with.

You place much faith in the London Ambulance Service, but bear in mind that quite some time ago they scrapped the Emergency Care Practitioner role that was set up to help manage patients at home, and as well as struggling with their funding (including for staff training) they already frequently fail to meet attendance targets due to their increasing workload. And talking of increasing workload try asking your local Community Nurses/ other community service workers if they are overstretched and whether all their staff have the best training/ qualifications to perform their role.

If the NHS was properly funded and resourced with adequate numbers of staff with the correct training & support (especially in the community) so that the new model proposed actually had a chance of working in the best interests of patients, I would support it.

I still think you are trying to protect the wrong health model, whatever the economic circumstances of today. Even the Tories have failed to reduce capital expenditure in the NHS to ZERO, so expenditure can go into financing the new arrangements.

Let us keep a death and patient-outcome list of the current system and the alternative system - I believe the new model will pull ahead. It has already for stroke victims, for instance.

We should criticise the politicians for failing to push through these changes ten years ago, but it was far easier for them all to keep their heads down, given what happened in Kidderminster, and the ease of being thrown out of power if you propose any hospital changes.

The clinicians in north-west London have led the proposals this time round, aided by heavy expenditure on PR companies that produced the documents. They said all along that the consultation was never a vote.

I think it is better to make the changes in the current economic climate, rather than another decade of no change, with more deaths and worse outcomes. It is a matter of weighing up the two options, but I do not suggest every single factor is on the side of the changes.