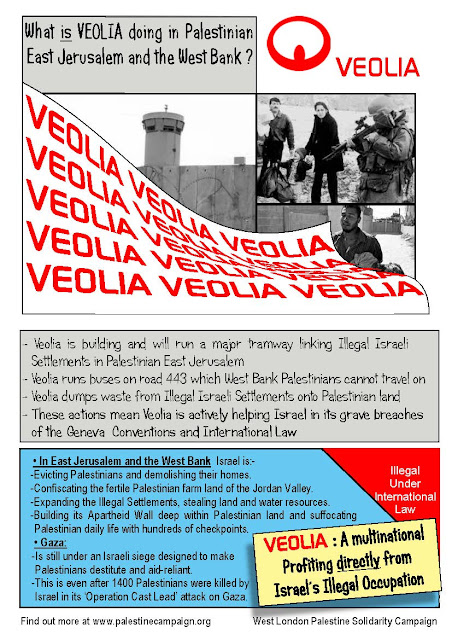 Brent and Harrow Palestine Solidarity Campaign is to step up its campaign to get Veolia excluded from the current Brent Public Realm contract procurement process. The contract covers street cleansing, waste management, recycling and parks and BHP grounds maintenance and is worth £145m over 9 years.

The campaign has been escalated following the Procurement Panel's decision after considering detailed evidence from the PSC not to exercise its discretion and exclude Veolia from the process. The evidence gave legal grounds for exclusion on the grounds that Veolia's activities in the Occupited Territories of Palestine constituted grave misconduct.

A letter from Richard Falk, UN Special Rapporteur on the West Bank and Gaza Strip,submitted to the North London Waste Authority, where Veolia withdrew from the bidding process, was sent  to the Panel. It said:

It is my view that Veolia’s violations of the UN Global Compact principles and its deep and protracted complicity with grave breaches of international law make it an inappropriate partner for any public institution, especially as a provider of public services.

....I urge you to follow the example set by public authorities and European banks that have chosen to disassociate themselves from Veolia and take the just and principled decision not to award Veolia any public service contracts. Such a measure would contribute to upholding the rule of law and advancing peace based on justice.

Brent has chosen not to take this 'just and principled decision' and has so far failed to provide Brent and Harrow PSC with the detailed grounds on which it based its decision not to exercise its discretion to exclude.

Petitions will be circulated calling on Brent Council to exclude Veolia and public meetings and lobbies are being arranged.

A copy of the petition can be downloaded below. Please circulate it in workplaces, trade unions, communities and places of worship.   A borough committed to social justice and serving a diverse community should not be handing residents' money over to a company such as Veolia.

Further information can be found on the Brent PSC website HERE
Posted by Martin Francis at 14:56:00

There isn't a "North West London Waste Authoirty" (or even Authority).