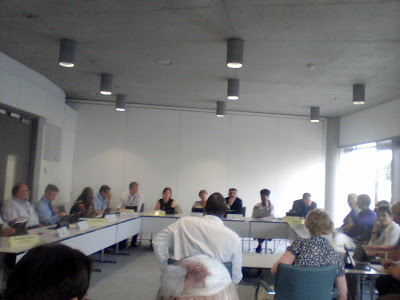 Well not really! The X Factor was filming outside the Civic Centre in Arena Square and Cllr Krupesh Hirani was quite overcome by seeing Nicole Scherzinger strutting her stuff, but inside Boardrooms 4 & 5 the X Factor or almost any other factor was decidedly absent. The photograph should be evidence enough.

A discussion on parking charges went on for ages and nearly made me rush out and throw myself off the Boardroom's balcony thoughtfully provided by the Civic Centre designers  for any Brent residents who can't stand it any more.

The parking discussion, where actually there appeared to be no major disagreements, was about ten times as long as the discussion on two major housing reports which will have a much more serious impact on families and individuals forcing some of them to leave Brent and others to choose between paying their rent or buying food for themselves or their children.

As Robin Sivapalan of Brent Housing Action pointed out from the floor, the report on Supply and Demand almost seemed to welcome the Coalition's Bedroom Tax as a way of shifting tenants from 'under occupied'  housing, while other actions appeared to reduce demand only by redefining overcrowding or disrepair rather than by  providing actual housing. The second report promised action to build new affordable housing but lacked detail while action was promised both to tackle poor landlords but also to encourage more landlords to rent out properties.

Michael Pavey in an outbreak of left rhetoric called private foster agencies exploitative but then seemed only to want to get a better (cheaper) deal out of them, He also suggested primary school expansions were preferable to the 'anarchy' of free schools.

Muhammed Butt was very tetchy and lost his cool on at least two occasions, giving the impression that opposition councillors had no right to disagree with him.
Posted by Martin Francis at 22:50:00