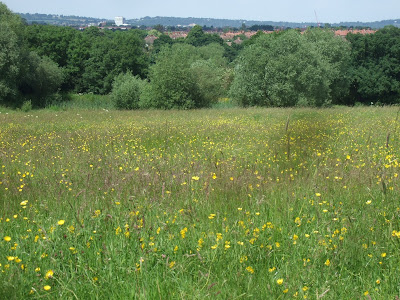 I explored Fryent Country Park with 28 eight and nine year olds today. They found their way out of a maze made of willow saplings and as they emerged from the woods marvelled at the sight of hay meadows stretching out in front of them. Reading their eager faces I could see that they were yearning to run through the long grasses and wild flowers and they were ecstatic when I let them go with meadow brown butterflies rising and fluttering above their heads as they  tumbled laughing into the sweet smelling hay.

Later they saw ponies and horses in a paddock  commenting on their stature and comparing the slender legs of a pony with the stocky legs of a carthorse, describing the feel of the donkey's  lips on their hands as they fed him, the colour of  the pony's teeth and loving being so close to an animal..

In the orchard they found toads, newts, millipedes, ladybirds, woodlouse, slugs, worms and snails and examined them through a magnifying glass. All the time the children chatted about their discoveries and pointed out their observations to each other. At the ponds they found tadpoles and tiny froglets and as with the mini-beasts eventually returned them gently and safely to their habitat.

In the afternoon in the cool of the Barn Hill oak woods the children worked together in self-chosen teams to build shelters for themselves. Small children managed to drag great tree trunks across the clearing and with their friends propped them up to make a tipi or tent shape, sometimes their structures collapsed, but they returned to the task with enthusiasm and perseverance.

After saying goodbye to the tired but happy class and their teachers at the bus stop I returned home just in time to hear Michael Gove on the Radio4 news speaking about the new national curriculum and the need to keep up with our international competitors and how this meant 'raising the bar' and children of 5 doing fractions and computer programming.

I could get into an argument about the accuracy of international comparisons and Gove's misuse of the PISA evidence (see LINK) but actually this isn't the point, The real issue is the Government's determination to make education serve the needs of the economy, and by that they mean global capitalism, and introducing its ethos and discipline  into schools both through the curriculum and through its rapidly privatising structures.

The child is no longer at the heart of education and education is no longer holistic, liberal and liberating.. Instead global capitalism and rampant consumerism is in charge and children and childhood are subjugated to its needs. With a fact based curriculum producing test and  examination results as a product, teachers subject to payment by results, and 'failing' schools that don't buy into the system forced to convert into academies, schools are being industrialised.

With university teacher training set to be replaced by 'sitting next to Nelly' work-based training, teachers will effectively be deskilled and no longer have the background in educational philosophy, history, cognitive psychology, learning theory  and subject knowledge possessed by past generations of teachers. Pearson and Amplify (the education arm of Rupert Murdoch's News Corporation) stand by with an i-Pad based individual curriculum for each child LINK, which rather than, as claimed, 'freeing up the teacher', could eventually replace him or her.

What is really incredible about Gove's 'vision' is that it probably won't actually serve the long-term needs of capitalism because it will produce narrow individuals, schooled into passing examinations and taught not to question, when what a society facing  the twin crises of dysfunctional capital and climate actually need is creativity, imagination and the ability to think and act  beyond self-interest.

I must return to the woods...

Has the Green Party got the capacity to take on this challenge?