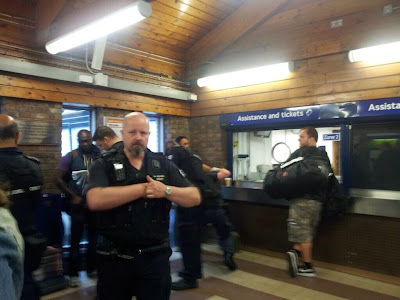 Monday morning commuters at Brent's Kensal Green station were shocked this morning to find a group of black-clad heavies in the booking office stopping passengers as they tried to get to work.

It was the UK Border Agency doing checks on the immigration status of targeted individuals. I saw a similar raid at Wembley Park station in the evening rush hour about 6 weeks.

I found the sight sinister and disturbing, especially when one young woman was surround by between 6 and 8 border guards questioning her in front of passing commuters who were possible her neighbours.

A threatening and humiliating experience.

This morning's raid sent shock waves around the borough as it appeared to coincide with the controversy around the 'racist van' campaign which told 'illegal' immigrants to 'Go Home or face arrest'. Cllr Butt, leader of Brent Council and ace Tweeter PukkahPunjabi from Willesden Green have been in the forefront of resistance to what they view as a crude campaign by the Tories to win back votes from UKIP. Sarah Teather, Brent Central's Lib Dem MP condemned the racist van campaign and was followed on Sunday by Vince Cable who called it 'stupid and offensive'.

Is this the Home Office's response?

Advice for people stopped in such raids is available HERE

Presumably the heavy in the foreground has just broken off from protecting our liberties to get out his Luger and shoot the photographer. No sympathy from me. Hasn't he ever watched WW2 films about the Occupation? He'll make sure his papers are in order next time.

Ukip if you want, I had a little doze earlier.

Thanks for reporting this epic bullshit. Shared to Facebook https://www.facebook.com/ChangingMoreThanLightbulbs