Get the 'racist van' off the road for good this weekend 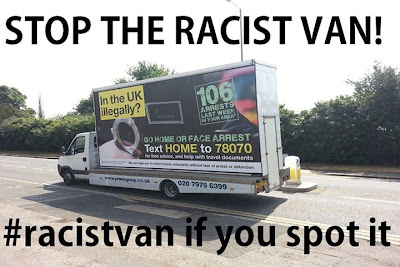 The campaign against the 'racist' vans is proceeding on several fronts as the Home Office pilot project comes to an end. The PCS has taken up the issue with the senior civil servant at the Home Office. A 'letter of intent' on legal action, probably under the Equalities Act,  has been sent by a refugee group in East London LINK and similar action is being contemplated by activists in Brent. It appears that the Home Office may not have sought planning permission for the van hoardings which raises questions of   their legality.

The Twitter campaign against the Home Office and the Promovans group has been supported widely and the trolling of the Home Office 'help line' has produced some hilarious interchanges which expose the 'Go Home' message to ridicule.

David Cameron as the head of the country's first PR government (public relations not proportional representation) as a former PR man may count the Home Office campaign as a success in getting the Coalition's 'tough stance' on immigration into the headlines but it has also served to alienate his Lib Dem Coalition partners.

Back in 1964 as a raw 16 year old I went for a job in the PR department of an advertising agency. I naively told the interviewer 'I like people'.  He instantly replied, 'That is no good. To be a success in PR you must utterly despise people'. I didn't get the job - some years later David Cameron did!

Meanwhile Green Party leader Natalie Bennett has added her voice to the debate in the Guardian:

I don't often agree with Nigel Farage, but he is right that the billboards being driven around some areas with high immigrant populations are "nasty" and "unpleasant" (Anger at 'go home' message to illegal immigrants, 26 July). The government's choice to adopt a slogan similar to that used by racists in the 70s is deeply disturbing, particularly at a time when the Muslim Council of Britain has expressed fears about a "dramatic escalation" of attacks against British Muslims. However, it is predominantly the rhetoric of Ukip that has caused immigrants to be so causally demonised by the government and other political parties. Mr Farage has spoken of "opening up our borders" to 28 million Romanians and Bulgarians, as though the entire populations of those nations were about to uproot themselves and move to the UK.

The government is clearly guilty of scapegoating immigrants for Britain's problems with housing shortages, low wages and unemployment. The fault clearly lies with its own policies, and those of the former Labour government.

I say Leave Them.
After all These are the Drivers of this Country That is now Closer to self Destruction than ever before and if they really believe that promoting distrust of foreigners is the way forward Let them Do it because as always there is a outcome and we can be certain that that outcome will be unpleasant to say the least.
but of course the political drivers are so blinded to reality they can't see the disaster ahead.
even though history has shown that Racism doesn't work but they are ignoring the warning (as to be expected of course ; 0 (