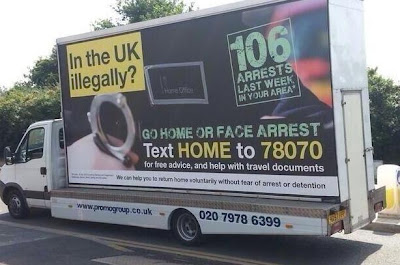 Brent has been chosen as one of six borough for the dubious honour of hosting a campaign that panders to the racists of the EDL and echoes the 'Blacks Go Home' slogans of the National Front in the 70s.

In the 70s I was one of many in anti-racist groups who organised weekend actions removing  or painting over the slogans from the walls and doors of London. The slogans, often aimed at individual homes. as below, were designed to intimidate. 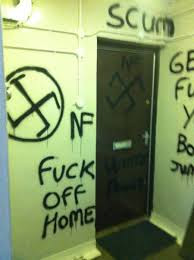 Now it is a government that is funding a campaign with exactly the same aims. It shows, contrary to the multi-racial bliss promoted by the government over the Olympics, that racism is now acceptable.

As a teacher I was very aware of the impact racist and anti-refugee campaigns had on children in our schools, making them anxious and insecure and sometimes ashamed of their status. This campaign will have a similar impact and seems designed to reassure the racsits that the government is taking action but will have the effect of stirring up resentment, suspicion and fear.

The choosing of Brent for such a campaign, when there was that notorious YouTube video about Wembley by a far-right racist group not so long ago is deeply offensive.

Sarah Teather MP spoke out against the campaign saying:


This is the latest in a string of Home Office announcements that are designed to make the government look tough on immigration. But I fear that the only impact of this deeply divisive form of politics will be to create tension and mistrust to anyone who looks and sounds foreign. These adverts are nothing less than straightforward intimidation and … can only have bad consequences for communities like those I represent in Brent, where people from all faiths and races have mixed for decades. We will all be much poorer for it.

Placing these posters in the most diverse borough in the UK is inflammatory and divisive. I have people in my surgeries every week who have been wrongly processed by the home office or who have come from places they simply can't return to and are now going to feel publicly threatened as a result of these posters. It's disgraceful and frankly unwelcome in our diverse and united borough.

I welcome their statements and am keen to discuss what we can do as a community once these lorries of hate are on out streets.
Posted by Martin Francis at 08:34:00

Politics can soar and it can plummet. This Government are sinking to a new low, they are the scum of the earth, whose side would they have been on in ww2? SLIMY BASTARDS. I can't read the words below you want me to print.