It appears that Brent Council may have won an award, that it nominated itself for, in a Planning competition. The winning entry in the mixed-use development category was its 1 Morland Gardens scheme in Stonebridge, the subject of a controversial “victory” at the Brent’s Planning Committee meeting on 12 August.

While the Council and its architects have been quick to celebrate the granting of planning permission for their proposals, with computer generated images of how marvellous the building will look, Brent’s new Strategic Director for Regeneration is investigating serious concerns which have been raised. These include whether there was improper conduct by Council Officers in putting forward proposals which went against Brent’s adopted policy on heritage assets, and whether Planning Officers misled the committee over those policies, in order to get the Council’s scheme approved. 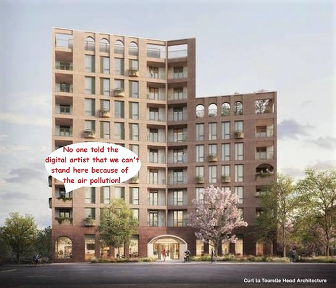 The report in “Planning Resource” says: ‘The project is aiming for BREEAM “Excellent” certification, with excess energy produced by the adult education building powering utilities in the homes.’ Whether that system works remains to be seen. One of the drawbacks of the proposed building is how close it will be built to the busy junction of Hillside and Brentfield Road. There will not be room for the trees shown on the left of the artist’s impression above, and they have yet to submit details of how they will provide fresh air to the college and the two floors of homes above it, which would suffer from harmful levels of Nitrogen Dioxide if the windows are opened. 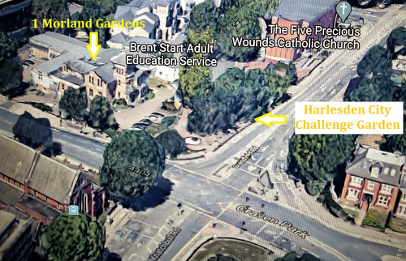 The report goes on to say: ‘The judges praised the use of a local community steering group to contribute feedback from hard-to-reach groups ensuring the building reflects local needs and aspirations.’ Brent has made much of its claims that the development proposals were guided by this “community steering group”, but it only met twice before the planning application was submitted in February 2020. At the start of its first meeting, on 20 August 2019, the members from the community were told by a Council Officer that the development would consist of ‘up to 65 new homes, a new adult education centre, café, and affordable workspace.’ As that is what was proposed after their “feedback”, it is difficult to see what the steering group’s role actually was, other than to sound good in Brent’s “spin” about the scheme.

I may be proved wrong, and the 1 Morland Gardens scheme, IF it ever gets built in place of the existing locally listed Victorian villa on the site, may prove to be a wonderful modern building. In which case, let's see whether, a few years down the line, the families who live in the flats and affordable homes it provides are happy in this “award winning” development. Or whether, as we have recently seen from South Kilburn, their dream homes turn out to be a nightmare.