Thank you for joining me again, on this third stage of our journey through the history of “the Welsh Harp” (our local reservoir – not the musical instrument!). In Part 2, we saw how the enterprise of W.P. Warner had made the name of his tavern synonymous with the reservoir beside it. This time we’ll explore changes, on and around the reservoir, into the 20th century. 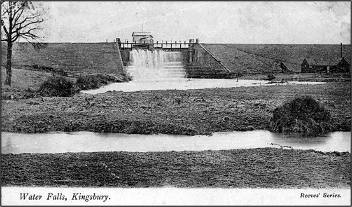 At first, not much changed. The area of water was mainly surrounded by the meadows of local farms, and attracted visitors to the countryside just beyond the expanding urban sprawl of London. Water flowing over the dam to feed the River Brent was a popular sight, across the fields of Gravel Pit Farm at Neasden. West Hendon had developed slightly, but there was still lots of open space nearby. 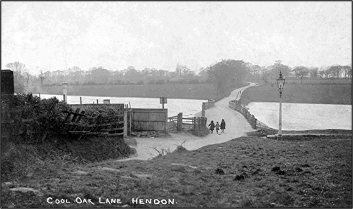 The Metropolitan Railway’s Neasden Works expanded, with a new power station to supply its electric trains, which were introduced from 1905. The Canal Company, which still owned the reservoir, refused to let the Metropolitan use water from its Feeder for cooling purposes, so they had to sink two wells for that purpose. It was the First World War that finally brought more industry to the area.

The airfield at Hendon already had a small aircraft factory, run by the Grahame-White company, when the war broke out in 1914. Other companies making planes for the rapidly developing aerial warfare were soon active in the area, such as the Aircraft Manufacturing Company (“Airco”) in Colindale and Kingsbury, Handley Page in Cricklewood and later Hooper & Co in North Wembley. In 1917, Handley Page designed a prototype seaplane, hoping to sell it to the Royal Navy, and their R200 was test-flown from the Welsh Harp. They did not receive an order, so the seaplane never went into production. 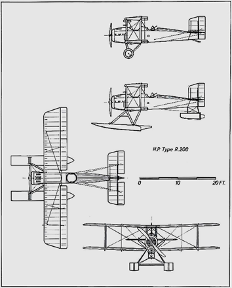 By 1917, the slopes of Dollis Hill down to the reservoir were also the home of the Mechanical Warfare Department. Its role was to design and test tanks, for use to try and break the trench warfare stalemate on the war’s western front. By 1918, one of the designs it was working on was a modified version of the Mark IX tank, and on a misty morning in November 1918 the world’s first amphibious tank was tested on the Welsh Harp reservoir. 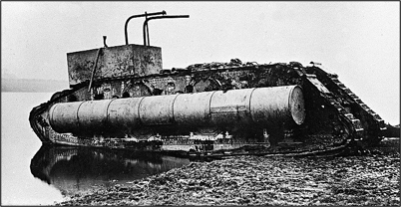 Earlier this year, a friend interested in military history sent me a link to a short film that includes (at the end) footage of this test. It had been used as part of a French article on First World War tanks, and was described as a ‘Duck Tank being tested on the pond of Dolly Hill’! This “top secret” Department remained at Dollis Hill until 1921, before being moved to Hampshire. Its main buildings, surrounded by a high wall, were in the Humber Road area. It is remembered in the street name, Tankridge Road, and a section of the wall remains at Walton Close. 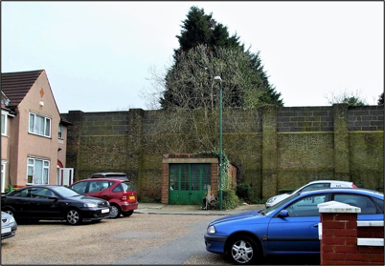 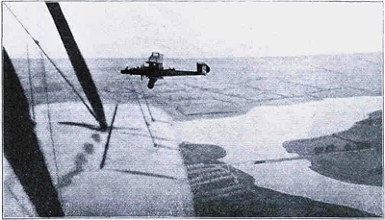 6. Aerial view of the reservoir in 1919, with West Hendon beneath the plane’s wing, and Dollis Hill beyond.

The local aircraft industry was badly hit when the Government scrapped its contracts for planes once the war had ended. One company at Hendon made use of the unwanted aircraft to offer pleasure flights to paying customers. The photograph above appeared with an article on the subject in “Flight” magazine, in June 1919, and shows a view across the reservoir to Dollis Hill. 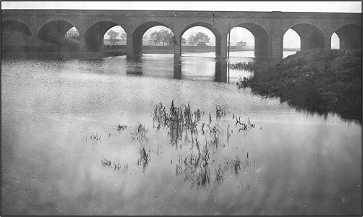 The 19th century had seen first canals, then railways, develop as important methods of transport. This scene from 1921, of the Midland Railway viaduct crossing the eastern arm of the reservoir, was soon to change dramatically as the rise of motor vehicles meant a need for better roads. The North Circular Road was constructed during the 1920s to help heavy commercial traffic avoid having to drive through Central London. Its proposed route would take it just south of the Welsh Harp, and by 1926 this section of the reservoir was filled in, and the River Brent put into a culvert, so that the road could pass under the brick arches of the viaduct. 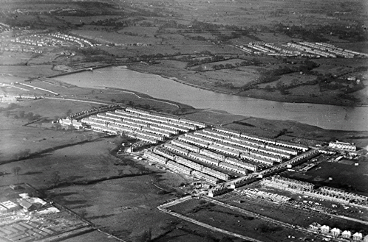 8. New housing at Dollis Hill, and over the reservoir at Kingsbury, late 1920s. (Brent Archives image 570)

The construction of the North Circular Road opened up the northern slopes of Dollis Hill for development, and by the late 1920s new streets were appearing between Brook Road and Links Road. These can be seen in the photograph above, together with what must be the start of the Post Office Research Centre at the top of the hill. Across the reservoir, new suburban homes were also being built in the Church Lane and Wood Lane areas of Kingsbury. In 1928, Willesden Urban District Council bought 40 acres of land on the Kingsbury side of the Welsh Harp, planning to use it as a cemetery, which would lead to disputes that lasted until 1965!

The rapidly growing population at Neasden and Dollis Hill prompted Willesden Council to open a recreation ground on their side of the Welsh Harp. They also built a Neasden branch library, overlooking it, at the corner of Aboyne Road and the North Circular, which opened in 1931. In keeping with a growing fashion for open air activity, this had a reading terrace at first floor level. 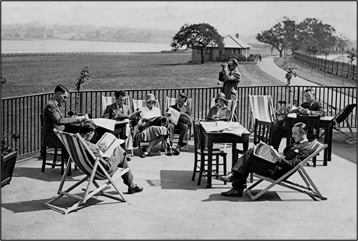 One of the open air activities which had grown in popularity at the Welsh Harp during the 1920s was “sunbathing”, although it was not popular with everyone. By 1930, there was growing opposition among local residents to the visitors who came to the reservoir’s banks to bathe in the nude. One man complained to the Council that, while walking home to the Edgware Road from Old Kingsbury Church on a Sunday evening, they had come across ‘a bunch of stark naked men…. Hardly a pleasant sight for a man to have to pass with his wife!’

Matters came to a head one weekend in June 1930, when 40 men and women of the Sun-Ray Club (‘some wore no clothes, others wore slips or bathing drawers’) were confronted by a crowd of around 200 local people. Despite the presence of four policemen, who told them that the sunbathers were on private land, with permission from the owner, and that they had no right to interfere, the crowd attacked the bathers and drove them away. Kingsbury Council dealt with the issue in a more dignified way, when they received a deputation (not a new idea) from the National Sun and Air Association in May 1931, although they also decided against sunbathing!

10. Extract from the minutes of a Kingsbury Urban District Council meeting on 6 May 1931. (Brent Archives)

On the reservoir itself, the Brent Sailing Club was formed at the Old Welsh Harp Inn in 1930. A less tranquil use of the water also began the same year, when the London Motor Boat Club held its first speedboat racing event at the Welsh Harp. Larger speedboats were also used to give thrill rides for paying customers, as shown in this newsreel film from 1932. 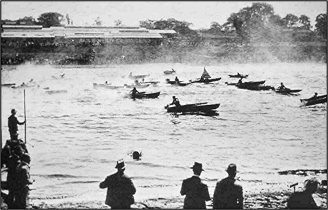 11. A motor boat race on the Welsh Harp reservoir in 1937. (From the collection of the late Geoffrey Hewlett)

The 1931 speedboat racing season had celebrity guests at its opening, the aviator Amy Johnson and actress Anna Neagle. Amy had lived at Roe Green for nine months, before the solo flight to Australia that made her famous, and then had a flat at Vernon Court in Hendon Way. By coincidence, it was Anna Neagle who starred as Amy Johnson in a film about her life, after her tragic death in 1941, while flying as a wartime pilot in the Air Transport Auxiliary. 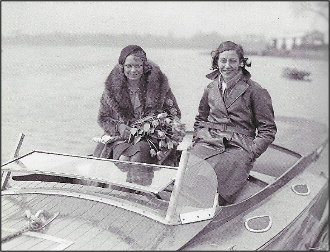 The south-east corner of the reservoir saw rapid industrial development along its main roads, and on the reclaimed land, in the late 1920s and through the 1930s. One of the factories by the junction of the North Circular and Edgware Roads made mattresses. The company was Staples, and the busy corner was soon known by that name. The traffic lights here became well-known for the jams that built up, as seen below in 1937. 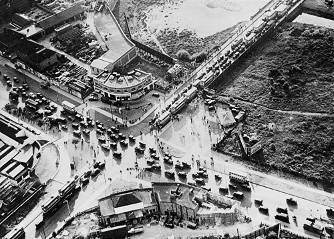 When war came again in 1939, Dollis Hill again had a part to play. Secret underground bunkers were built for the Admiralty at its Citadel office building, on the corner of the Edgware Road and Oxgate Lane, and for the Cabinet at “Paddock”, beneath the Post Office Research Station in Brook Road. It was rumoured that a flying boat was moored on the Welsh Harp, ready to fly Churchill and other key leaders to safety from their reserve War Room if necessary, but I have no proof for that story. It was the research station that developed the first electronic computers, used at Bletchley Park for code-breaking during the war, and Tommy Flowers, who led the team that made them, is remembered by the modern street name, Flowers Close. 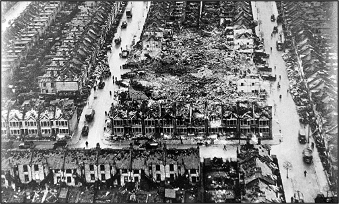 It was not those key targets that were hit during the Welsh Harp’s worst bombing raids of the Second World War. Early in 1941, Germany was testing new designs of high-explosive bombs, and dropping a single bomb in a raid, so that its effects could be seen afterwards. One of these exploded above the Ravenstone Road area of West Hendon on the evening of 13 February 1941, flattening 40 homes, killing more than 80 people and making around 1,500 homeless. At the opposite end of the reservoir, a V2 rocket hit one end of Wykeham School in March 1945. Luckily no children were there at the time, but seven people were killed in nearby homes.

Just as it had during the First World War, the reservoir played its part between 1939 and 1945. A Hendon Sea Training Corps was formed in 1941, and its young volunteers learned some boating skills on the Welsh Harp, as well as on land at a school in Algernon Road. Production at many factories was changed, to produce equipment for the war effort. Hickman’s works on the North Circular Road had been shopfitters, but by 1943 their carpenters were building wooden landing craft, which were tested on the reservoir before being handed over to the Royal Navy. LCAs were “Landing Craft, Assault”, which carried a platoon of up to 36 soldiers, from ships around ten miles offshore, onto the beaches of Normandy on D-Day. 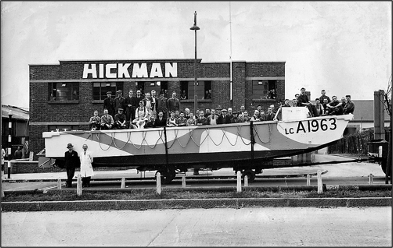 Next weekend we’ll visit the Welsh Harp in more peaceful times. I hope you will join me then, for the final part of this series.