Fourth of the guest series by local historian Philip Grant

Thank you for joining me again, as we sail towards the finishing line of our local reservoir’s story. If you missed Part 3, you will find it here. 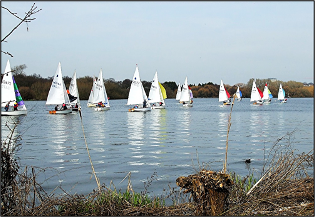 Sailing became an important use of the Welsh Harp in the years after the Second World War. Several large companies, such as Handley Page and Smiths Industries from Cricklewood, set up their own sailing clubs for employees. Others were local organisations, such as the Wembley Sailing Club (formed in 1953) and the Sea Cadets. The various clubs have since come together under an umbrella organisation, the Welsh Harp Sailing Association, based at Birchen Grove, which leases the reservoir for all water-based sports and leisure activities. 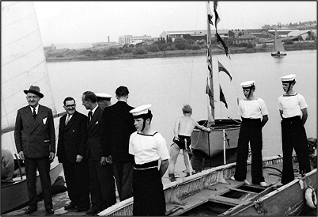 The reservoir had come into public ownership in 1948, as part of the post-war Labour Government’s nationalisation of transport industries, which eventually saw it managed by the British Waterways Board. Under another environmental innovation from that time, the reservoir and its shoreline were made a Site of Special Scientific Interest in 1950, particularly for their importance to rare bird species, but also for the plant life at the water’s edge.

Most of the land around the Welsh Harp was still in a mixture of private and local authority ownership. I mentioned in Part 3 that Willesden Urban District Council had purchased 40 acres of land on the north side in 1928. We saw in the articles on Church End and Chapel End that Willesden had opened a new cemetery in 1893, but because of the district’s large population, this was already filling up. It planned to put a cemetery here, but Kingsbury Council objected, saying that it wanted the area used for housing. After a public inquiry, the Government agreed to loan Willesden the money for a cemetery, but said it must sell Kingsbury 14 acres nearest to the reservoir for recreational use. This later became the Welsh Harp Open Space. 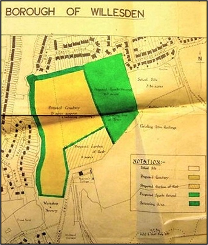 3. Willesden's 1950 plans for its Kingsbury Lawn Cemetery, and Garden of Rest. (From the National Archive)

After Kingsbury merged with Wembley in 1934, Willesden’s plans were further delayed, as the new council tried to buy the land from it, for its own cemetery needs. The only thing that the two councils managed to agree on, when war came in 1939, was that they could both use what is now the Birchen Grove allotments site for mass civilian burials, if the need arose (thankfully, it didn’t!). Under the new post-war planning regulations, Willesden applied again in 1950 to use their land as a burial ground. Approval was eventually given and their Kingsbury Lawn Cemetery was consecrated in 1954, with the superintendent’s house and chapel built by 1956. Despite this, the ornamental gates at the top of Birchen Grove have never welcomed a funeral!

4. Sculling finalists and the British eight at the Women’s European Rowing Championships, 1960.
(Source: Brent Archives – Willesden Chronicle photographers’ negatives)
On some websites, you will read that the Welsh Harp was the venue for the rowing events at the 1948 London Olympic Games. That’s incorrect (in fact, they were held at Henley, on the River Thames), but the reservoir did host the 1960 Women’s European Rowing Championships (“click” for a detailed article on these). That event was organised by Willesden Borough Council, and the competitors were accommodated at the then recently opened John Kelly Girls School (now part of Crest Academy), just up Dollis Hill from Neasden Recreation Ground. 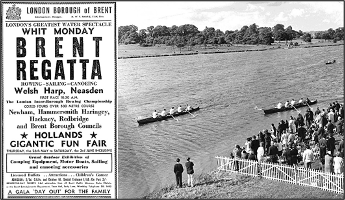 The Council had run a Whit Monday Willesden Regatta on the reservoir for many years, and this continued as the Brent Regatta after it merged with Wembley in 1965. One of the highlights for the crowds was watching teams of local councillors from a number of London Boroughs taking part in rowing race over a 500-metre course. The photo above shows the Brent boat winning the 1969 race – I wonder who would be in the crew if the race was still held today (any nominations?). This annual bank holiday regatta ended in the early 1970s.

6. Two views of activities at the Youth Sailing Base. (Images from Brent Archives)

It was not just adults who could enjoy water sports on the Welsh Harp. In 1964, the year before it was disbanded, Middlesex County Council opened a Youth Sailing Base on the northern arm of the reservoir, where thousands of young people learned to sail or canoe safely. Another important facility for local youngsters came in 1973, when Brent Council opened the Welsh Harp Environmental Education Centre (“WHEEC”) on part of the proposed cemetery site. A large nursery, to grow plants for Brent’s Parks Service, also opened on the site in 1977. 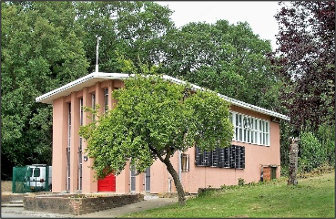 The importance of the Welsh Harp for nesting water birds had long attracted ornithologists to the area. When proposals for a marina, close to a key nesting area near the Welsh Harp public house, were put forward in the early 1970s, a number of them came together to oppose this. The Welsh Harp Conservation Group was formed in 1972, and their volunteer members have helped to look after the habitats on and around the reservoir ever since (in a similar way to the Barn Hill Conservation Group, featured in my Fryent Country Park Story). 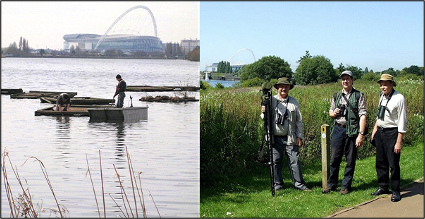 As well as looking after nesting rafts and bird hides, and the wider vegetation of the area to encourage wildlife of all sorts, the group has played an important part in recording the natural history of the reservoir, and sharing this with visitors. From a first guided walk on a bank holiday in 1976, they expanded this to provide monthly wildlife walks. When my children were young (in the late 1980s or early 1990s) our family benefitted from one of these walks. For the first time in my life I got to see beautiful Great Crested Grebes, an unforgettable sight!

While there was relative peace and quiet for the bird nesting grounds at the eastern end of the reservoir, there were major developments taking place not far away, at Staples Corner. The narrow roadway under the Victorian railway viaduct was causing major traffic problems on the North Circular Road, especially when it was planned to start the M1 motorway from here. A massive Brent Cross flyover was built in the 1960s, to carry east-west through-traffic over the top of this bottleneck. You can see this in the photo below, and I have added part of a 1921 image to help show the line of the viaduct, which you can just see in the modern picture. 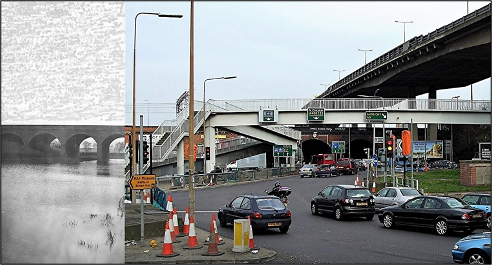 10. Staples Corner, with North Circular Road flyover and the railway viaduct (including 1921 comparison).

You may be wondering what happened to the Welsh Harp public house, which featured in Part 2 of this story. It had been replaced by a more modern building in the 1930s (the fate of a number of historic inns in our area), but it fell victim to more roadworks when the north-south A5 flyover was built over Staples Corner in the 1970s. It was demolished in 1971, and its site was where the north-bound slip road, from Staples Corner towards West Hendon, passes the entrance to Priestley Way, a service road for a small industrial estate. What a sad epitaph for the inn which gave the Brent Reservoir its more popular name!

Going back to the reservoir, this does have to be drained occasionally, both for major maintenance work on the dam and to remove the rubbish which unfortunately gets dumped in it. One remarkable feature when this happens is that the original winding course of the River Brent can still be seen, just as it was when it marked the boundary between Kingsbury and Hendon parishes to the north, and Willesden parish to the south, when the land was first flooded to create the reservoir in 1835. 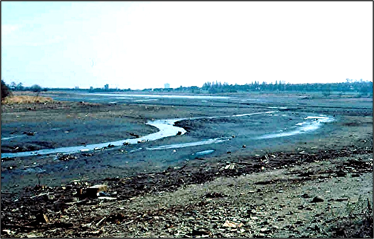 12. The River Brent flowing through the drained reservoir in 1974. (Photo by Leo Batten)

In 2012, responsibility for the reservoir was passed to the Canal and River Trust, a charity set up when the Government abolished the publicly-owned British Waterways Board. Questions were raised about how safe the reservoir might be in the event of a severe storm, after a similar Canal Age dam at Whaley Bridge in Derbyshire was in danger of collapse in 2019. Luckily, it emerged that as well as regular checks, further reinforcement of the dam with concrete had been carried out in 2005-07, following detailed studies of how extreme heavy rainfall might affect the Welsh Harp reservoir, and the river downstream of it. Brent Council also issued a statement following the Toddbrook Reservoir emergency, with links to information for anyone who feels the need for reassurance.

Earlier, I mentioned facilities that had been set up for young people near the reservoir. Sadly, Barnet Council closed the Youth Sailing Base, which they inherited from Middlesex County Council, in 2004, and sold off its site to a developer for building luxury waterside apartments. Instructors from the Base went on to set up the Phoenix Canoe Club, so that there is still a place on the Welsh Harp where youngsters can enjoy this sport. 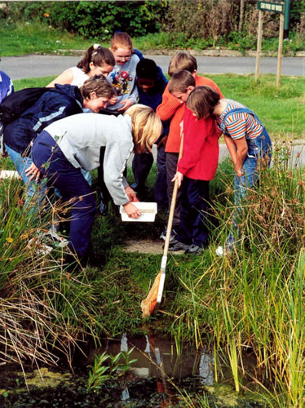 The Welsh Harp Environmental Education Centre went from strength to strength. Back in the 1980s, my daughters were among the thousands of local school children each year who have enjoyed learning about nature in a hands-on way, from enthusiastic experts. But the squeeze on local authority spending has also hit the former cemetery site. By the 1990s, Brent Council had closed its Parks Department nursery, which later reopened as the private Greenhouse (now Birchen Grove) Garden Centre.

During the past ten years, cuts to funds allocated to youth services first saw the WHEEC receive financial support from the Careys construction group, then its threat of closure. Luckily this environmental “jewel in the crown”, celebrated in a 2015 Council video, was saved when Brent passed the Centre to the Thames 21 charity, under a Community Asset Transfer in 2016.

I hope you have enjoyed discovering more about “the Welsh Harp” in this series of articles. With all Brent’s Libraries now open again (with restricted hours), you can find even more information and pictures in Geoffrey Hewlett’s 2011 book, “Welsh Harp Reservoir Through Time”, in the local history section at ref. 942.185. 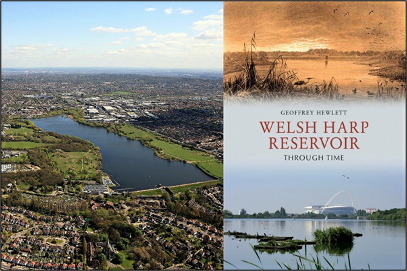 14. The reservoir in 2010, and the cover of Geoffrey Hewlett's book. (Photo: London Canal Museum)

But it’s also a place to visit and enjoy, on our doorstep, if you can do so safely, whether for a walk, some wildlife watching or perhaps to learn to sail or paddle a canoe. After all, it is (officially) the Brent Reservoir!

Next weekend we’ll take the No.32 northbound from the Priestley Way bus stop (by the site of the Welsh Harp Inn) for a one-off special article, then ride the same bus route southbound for a new local history series. Hop aboard “Wembley Matters” to find out where these journeys will take us.

I remember the annual regatta well, one of the 3 big local events that everyone went to: the others being the Brent Show and the Willesden Carnival parade. I have to admit that my friends and I were far more interested in the funfair at the Regatta than in the sailing.

Thank you for such an informative series of articles.