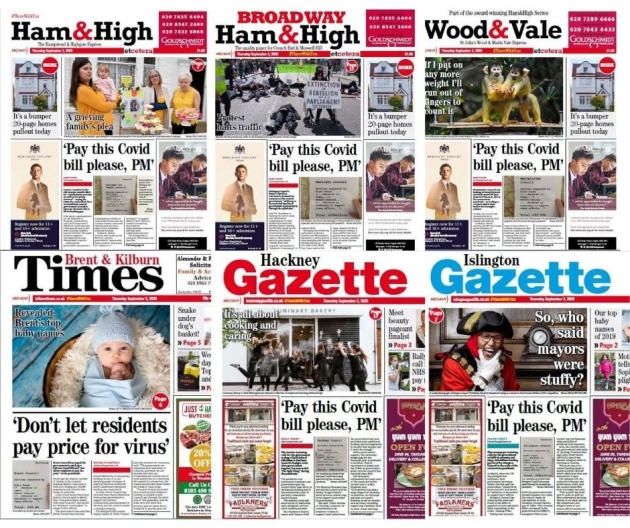 Some of the many Archant titles

Brent's only surviving local paper, the Brent and Kilburn Times, which during the Covid19 crisis has been asking readers for support has been saved from bankruptcy and potential closure along with other Archant titles. Readers will have noticed how thin the paper has been recently.

The Eastern Daily Press, lead title of the 150 year group, explained the acquisition by Rcapital.

Norwich-based Archant - which publishes EDP, Norwich Evening News and many newspaper and magazine titles throughout East Anglia and beyond - has been acquired by new investors who will provide funding to continue its transformation into a successful modern media company.

The announcement also gives security for many hundreds of Archant pensioners and their families, and protects the hundreds of local businesses Archant trades with, who may otherwise have suffered losses  had the business, hit hard by Covid-19, been forced into bankruptcy.

Simon Bax, Archant’s Executive Chairman, said safeguarding the interests of local suppliers and customers, and its near-1,000 employees had been his priority.

Archant and our newspapers and magazines are an intrinsic part of East Anglian life. Not only do we employ hundreds of people in the region, but we are also an important part of hundreds of other local businesses who supply us, or depend on us to help grow their business.

Like so many other businesses, Covid-19 threw us into a very difficult position. Naturally, I am very sad this deal marks the end of ownership of the local families who founded our company all that time ago. But equally I am happy we have found a new partner who respects our heritage and is able to nurture Archant’s future.

I would also like to thank the Colman and Copeman families who have been the custodians of quality journalism in East Anglia for so long – their legacy is a modern media company that will continue to proudly serve the region.

The new owners, family-based firm Rcapital, specialise in backing companies with immediate financial challenges but who otherwise have ambitious and compelling plans for commercial success.

We are incredibly pleased to have worked alongside Archant’s management team and KPMG to put forward a plan that will restructure finances and inject fresh capital into one of Britain’s oldest local newspaper brands. We are hopeful, that with the support of its creditors, Archant will emerge from this challenging period as a stronger business that continues to provide a vital service to its clients and readership. Today’s announcement marks an exciting next phase for both Archant and Rcapital - I am looking forward to working with Simon and his team to deliver on the transformation plan.

Like many other businesses in the UK, Archant had become increasingly hamstrung by multi-million payments required to pay down the large deficit in its long-defunct company pension scheme.

Under the deal, that pension scheme has been transferred to the Pension Protection Fund, a public body responsible for managing almost a quarter of a million pensions in the UK.

Shareholders in holding company Archant Limited, which has been placed into administration as part of the change of ownership, have been informed their shares are now of no value.

There is no interruption to publishing in the business, which continues to trade as before.

Clearly it is early days and we will have to wait to see what the 'transformation plans' will mean in terms of jobs and the survival of titles. Closure or transfer to on-line would be a blow against local democracy. The group have this week launched a campaign backing local councils' demands for adequate post-Covid funding.