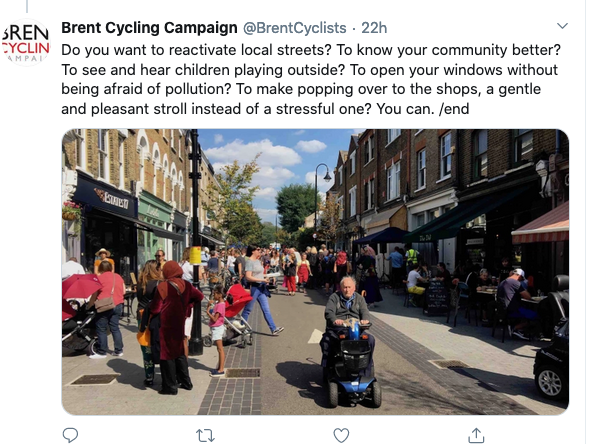 As an ex-daily cyclist (I stopped after several mini-strokes but am thinking of resuming) and keen environmentalist I am in favour of trying to reduce traffic on our streets and make them safe for cyclists and pedestrians so welcomed the Brent Healthy Neighbourhoods scheme but the opposition to experimental arrangements has taken me aback.  As a major initiative in 'building back better' and responding to the declaration of a Climate Emergency it was imperative that the Council took residents with them - that does not appear to have happened although social media is unlikely to be the best guide.

Community Facebook sites in Brent have been full of criticism of specific schemes in terms of practicality but  the most frequent complaint is lack of consultation with residents. Brent Council explains LINK:

In normal circumstances we would not implement a traffic scheme like this without comprehensive engagement with the local community first.  Because of the urgency required in dealing with The COVID-19 pandemic, the Brent Healthy Neighbourhoods will be introduced as a temporary scheme using an experimental traffic order.

Residents in affected areas will be sent a letter outlining the changes, and informing them that they can visit www.brent.gov.uk/consultation to have their say.

Whilst the experimental traffic order can last up to 18 months, public comments can be made during the first 6 months. A review will be conducted after 6 months and taking all comments into account a decision will then be made to make schemes permanent with or without amendment, or to remove schemes.

One Facebook contributor described the Council's implementation of the policy as 'cack-handed' (look up the origin of the expression - fascinating, apologies to left-handed people) and it does seem to have got the worthwhile project off on the wrong foot.

The Labour Group had a briefing on Healthy Neighbourhoods yesterday and apparently councillors were not happy with the backlash they are experiencing from residents and the majority were critical of the lack consultation and sharing of information with themselves as much as residents.

Brent Cycling Campaign have put up a brave fight in advocating for the changes, better than the Council's own media strategy on the issue, but it is an uphill task.  One would expect opposition from the pro-car lobby and they have been backed by Conservatives in many areas but concern goes wider than that and is often expressed by those who are sympathetic in principle.

Wembley Central resident, Jaine Lunn, expressed it well in an email  about the Harrow Road cycle lane which runs from the North Circular to Wembley Triangle:

Whilst I appreciate the need, would somebody please inform me who thought it was a good idea to convert the westbound Bus Lane into a Cycle Lane, how much research was done? Instead of reducing the size of the pavement/Footpath to accommodate cyclists.  It kind of defeats the object, I was under the impression this was there to help Public Transport move quickly.  All this has done is increase traffic congestion it now adds another 20 minutes to the journey.  As a cyclist who used to regularly use this route, I had no problem sharing the bus lane with Buses, and on occasion was quite happy to cycle on the very wide footpath if necessary.  These footpaths are very wide and do not have a great amount of footfall!  I do hope the powers that be come to their senses and revert back.

On the opposite side Eastbound,  I find myself in crossing the lights at Neeld Crescent, and immediately having to swerve the bollards swing out in to oncoming traffic to ensure I am in the lane which has been reduced to barely the width of a bus or large truck, as the signage is not good and there is no grading to the cycle lane.  Absolutely nuts, and not thought out very well.  In particular I can see this becoming a hot spot for accidents/near misses.

The only good thing I witnessed was the ability of numerous E-Scooters using these lanes at  fast speed which appeared to be above the legal limit of 15 mph.