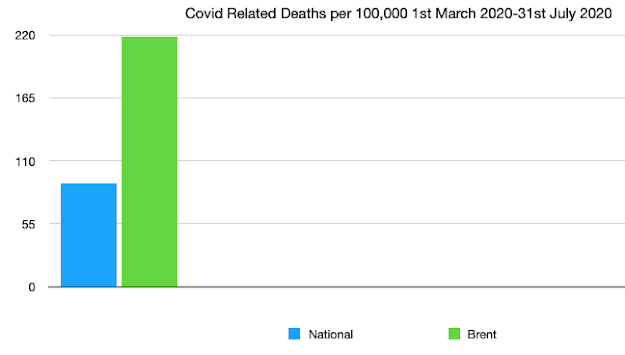 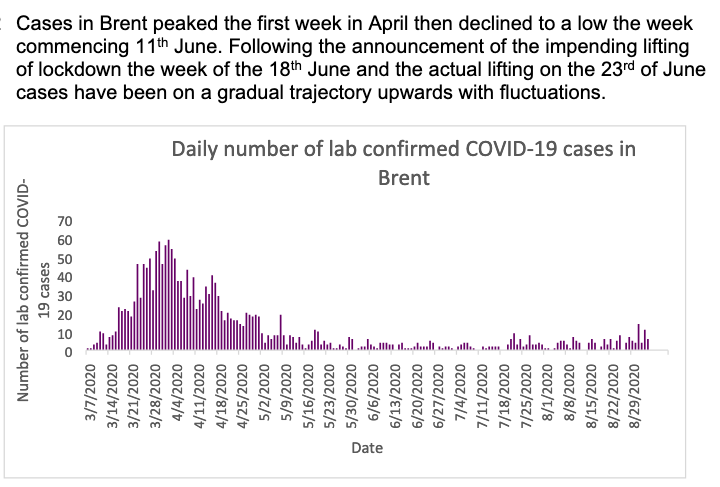 With warnings of a second wave of Covid19 infections a report going to the Community and Wellbeing Scrutiny Committee on Tuesday September 15th (Virtual 6pm) assumes great importance LINK. The committee continues under the chairmanship of Cllr Ketan Sheth but with some changes in personnel including the inclusion of veteran health campaigner Cllr Gaynor Lloyd, elected at the Barnhill by-election. They will have the huge responsibility of assessing lessons from the way the pandemic has been handled so far, preparations for dealing with a second wave, and addressing the health and social inequalities revealed by the disproportionate impact on Brent’s BAME population. A task, I would suggest, much more of  a priority for Brent Council than the renaming of a local park.

These are some key extracts from the report:

BAME populations in England and Wales are younger than white populations and as age is a strong influence on death rates, it is important to take account of age. When this is done:

·Black males are 4.2 times more likely to die from a COVID-19-related death than White males;

·Black females are 4.3 times more likely to die from a COVID-19 related death than White females

·Black males are 1.9 times more likely to die from a COVID-19-related death than White males;

·Black females are 1.9 times more likely to die from a COVID-19 related death than White females.

After taking into account age and socioeconomic circumstances or deprivation:

·Bangladeshi and Pakistani ethnic group males are 1.8 times more likely to die from a COVID-19-related death than White males;

·Bangladeshi and Pakistani ethnic group females are 1.6 times more likely to die from a COVID-19-related death than White females

Possible reasons for the disproportionate impact

There are three possible reasons for the disproportionate impact of COVID on BAME communities:

1.Increased exposure to the virus

Exposure to the virus

1.Brent BAME population are high users of public transport. Buses in particular remained crowded during the pandemic as did bus stops in the Wembley and Harlesden area.

2.Brent BAME communities have high levels of inter-generational living with those at risk including the elderly and those with long-term conditions being exposed more than those in smaller households.

3.BAME communities have high attendance to temples, churches, mosques and other places of worship with large communal activities such as services, weddings and funerals. These were implicated in spread elsewhere and it is likely were these were factors in the early part of the epidemic

5.BAME community members are more likely to be frontline workers and less likely to be managers and able to influence their working conditions.

1.While levels of adult obesity are relatively low in Brent (compared to England), 50% of residents are overweight or obese. It is estimated that over 11% of the adult population has diabetes, compared to an England rate of 8.5%. Diabetes is more prevalent in Black and South Asian patients, and our high levels of diabetes may be one reason for the higher death rate seen locally.

2.Fewer patients are recorded on their GP records as having high blood pressure than is the case for England (12.4% compared to 14%). While this may indicate a lower prevalence, the size of our Black and South Asian communities who would be expected to have higher rates of hypertension might suggest under diagnosis. Of those who are diagnosed, significantly fewer patients have their blood pressure controlled in Brent than nationally.

1.It has been hypothesised that more deprived communities may have poorer access to health care and that this could have played a part in the pattern of mortality (the inverse care law). Early in the pandemic, NHS England instructed primary care to move away from face to face appointments in favour of telephone and on line access. There was a concern that this model of care may have disadvantaged the digitally excluded.

2.There is some evidence from elsewhere that Black men were particularly unwell on presentation to hospital and more likely to be admitted direct to ITU. This could indicate a reluctance to seek help earlier or a more rapid progression of disease in this group of patients. There is no evidence of poorer outcomes for BAME patients admitted to secondary care locally. However the completeness of recording ethnicity limits our ability to analyse this.

Themes from the Church End and Alperton community engagement events

·Some of are not fully informed of information/advice therefore educating residents is crucial.

·Many people are not wearing masks, particularly on Church Road. Messages around facemasks need to be clear without offending people.

·Need to invest in Church Road and the local community, as the area is unappealing. This is reflected by local drug dealing, crime, poor employment opportunities and run down businesses.

·Many people face multiple issues even before the pandemic including stress and financial issues.

·People tested for Covid-19 are not reflective of the local community – question of what we are doing to encourage people to take tests.

·Young people face mental health issues, which is a primary reason for large gatherings and house parties in the area. Young people are aware of the risks but they are battling with their mental health. Need role models/influential people from area through to communicate through songs and messages. Need to think about education, prospects and access to networks.

·Access to GPs online has been difficult, especially for those whose first language is not English. Confidence in services is low.

·Worry that people are being forgotten about if they need medical help but don’t engage with health services or local support. A helpline was suggested so people’s needs can be explored to signpost them to support and services. Need to build local people’s knowledge.

·Concern over people who are not eligible for support services but housed in HMOs.

·Need to hear from those who have lost people. ·Attendees are happy to be a part of the solution by working with us as community champions.

·Messaging needs to be reinforced and shaped for people who do not speak English as their first language.

·Channelling tailored messages through places of worship and Asian radios would be effective. Could work with the Multi-faith forum.

·Measures are not being followed on high road - displays and signboards are insufficient. Signs on shops are usually handwritten. Some shops are doing well which could be replicated by other shops.

·Strategy needs to focus on prevention and long-term outcomes.

·Community is pessimistic as opposed to central government, which changes guidelines frequently.

·Many organic community groups exist which need to be engaged with.

·Easy to get GP appointments, however many people are nervous. They need health services but uptake is low. Lack of internet and no phone line is another issue.

·National Covid-19 test system was down and busy highlighting the barriers to securing a test. Testing may not be reflective of local communities – may need to encourage people to take tests and raise awareness of sites.

·Issue of people having symptoms but not getting tested due to risk of losing job or income.

·There are opportunities despite the negatives – people are walking and being active whilst maintaining social distancing measures.

·Attendees look forward to working with us to find solution

The meeting can be observed here: https://www.brent.gov.uk/your-council/democracy-in-brent/local-democracy/live-streaming/