Check air quality in your street, workplace or school with one CLICK 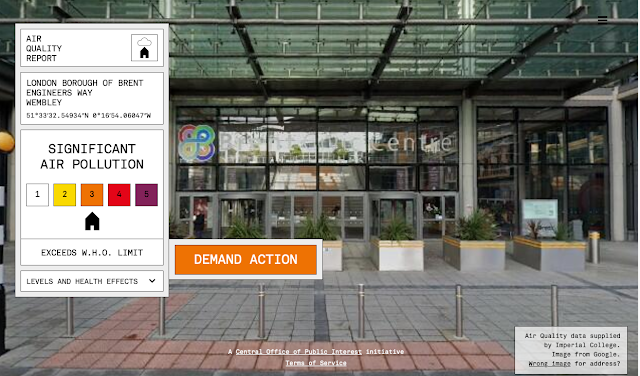 The Report for Brent Civic Centre

A new national website is allowing people to measure air quality on their street using their postcode. This is particularly useful when consideraing Healthy Streets/Low Traffic Neighbourhoods.

addresspollution.org offers a free air quality report for every UK address based on data from the Environmental Research Group at Imperial College London.

The work was commissioned by campaign group the Central Office of Public Interest (COPI), which wants the property sector to mandatorily disclose air quality information in the same way it does with asbestos. And it hopes this will also put pressure on governments to act.

A pop-up ‘demand action’ button is displayed to visitors using the site, which takes them through to a petition calling for estate agents and sites such as Rightmove and Zoopla to disclose air quality info at the “earliest opportunity”.

COPI founder Humphrey Milles described air pollution as a “dangerous, invisible killer” and said it would be “shameful” for the property industry not to inform people now this air quality information was so readily and easily accessible.

Legal opinion obtained by COPI goes further and suggested there is a strong legal argument that estate agents, property websites, surveyors and conveyancers will need to inform prospective buyers and renters of air pollution levels.

In their opinion Jessica Simor QC and barrister Neil Fawcett refer to the ground-breaking recent ruling on the re-opened inquest into the death of nine-year-old Ella Adoo-Kissi-Debrah, which found her death was “contributed to” by exposure to excessive air pollution. Previously, deaths were only "linked" to exposure to air pollution.

Mark Cunningham, chief executive and co-founder of Whenfresh, which provides property data to major lenders, said that if the problem of air pollution isn’t dealt with, “it will clearly have an impact on the saleability and value of properties in high pollution areas”.

He added: “So like asbestos, radon, flood risk and Japanese knotweed, if data is available the mortgage lenders will want to understand it. Lenders take any environmental issues that might impact the value of the properties they effectively co-own very seriously."

The website’s national roll-out – it was previously available in some London areas – follows a report published in the journal Environmental Research last month that concluded that 99,000 early deaths across the UK are due to dirty air.

Another piece of research published by the European Society of Cardiology in October 2020 found 15% of COVID-19 deaths globally could be attributable to air pollution.

Earlier this month the Court of Justice of the European Union ruled that the UK has “systematically and persistently” exceeded legal limits for dangerous nitrogen dioxide (NO2) since 2010.

The UK has agreed to abide by court decisions initiated before it left the European Union. It could therefore face fines if it continues not to comply, and has been ordered to pay the European Commission's legal costs.

Interesting read, whilst my street is showing level 3, the High Road approx 20 mtrs away is showing level 5, it would appear from the photographs that these were done prior Covid Lockdown, but I have no doubt once back to some normality they will increase. We all know how much our air quality has changed especially in Wembley, due to all the construction and traffic