Last month, I wrote a guest blog about a planning application, which seeks to remove a condition from an existing planning consent. That condition was put there for public safety reasons. You can read the details in my earlier blog here. 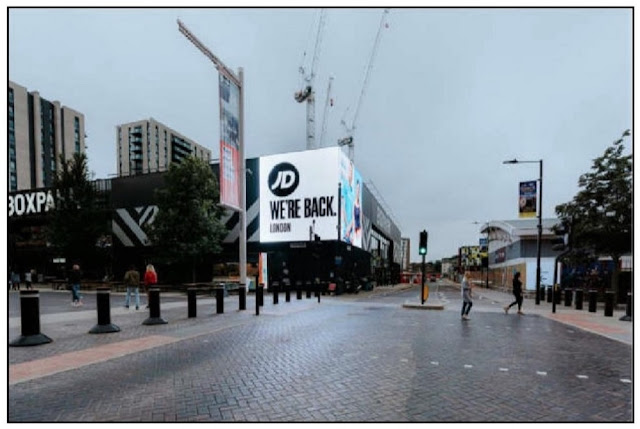 The Olympic Way crossing on Fulton Road, and the LED screens (“JD WE’RE BACK”)

The condition prevents moving image adverts from being shown on large LED screens fixed to the Boxpark building in Olympic Way, when vehicles are using Fulton Road. It is designed to protect pedestrians on Olympic Way, as they use the busy crossing at Fulton Road, from drivers who may be distracted by the moving images.

After I submitted my objection to that planning application, the Planning Case Officer decided that the application was invalid, because ‘the proposals appear to be unclear in terms of which screens they are referring to and which screens the Highways Assessment appears to be relating to.' 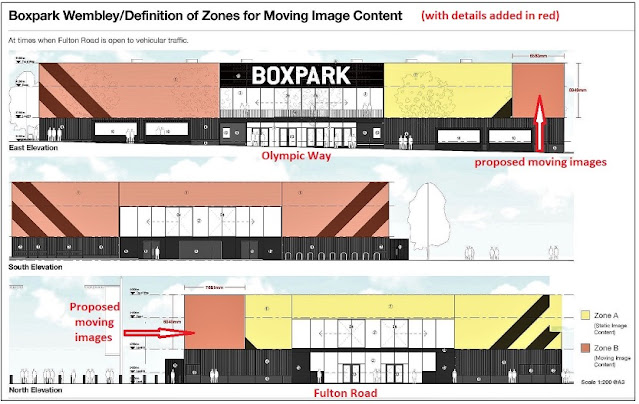 Drawing from the planning application, noted to show where moving image adverts are proposed.

Now the application has been resubmitted, and has been validated, with the original planning application number, 21/0379. The new public consultation period on the application runs until 22 April 2021, so if, like me, you are concerned that it would be unsafe to remove that condition, you can make your objection on the Brent planning website for 21/0379. There is also a related advertisement consent application at 21/0427.

One of my original concerns was that only two people (one of which was Quintain) had been consulted on this application, and no local residents. Now letters about the application have been sent to a number of addresses in the Olympic Way area, although 16 of the 23 were to various parts of floors in the Olympic Office Centre (I wonder how the Covid-19 vaccination centre there will respond!).

An extra address has been added to the formal consultees, but this is “Environmental Health – Noise Team’ at the Civic Centre (although I think the proposal is for moving images, not movies to be shown on the screens). One of the specific points made in my February objection comments was:

‘When the original application was considered, both Brent's Public Safety Manager and the Metropolitan Police submitted comments on public safety matters. It is imperative that their comments should also be sought on this application.’

Why have they been omitted from the revised list of consultees? That is a question I will not just ask in this post!

I have written to Cllr. Promise Knight, Lead Member for Community Safety, asking her to make sure that Brent's Public Safety Manager and her Metropolitan Police contact(s) on public/road safety are made aware of this planning application, so that they can submit their comments on it.

I have also asked Brent's Planning Case Officer why they were not consulted.

Further to my comment above, I have received the following reply on why Brent's Public Safety Manager and the Metropolitan Police were not consulted on this planning application, even though they had commented on the original application which imposed the public safety condition that the advertisers are now trying to have changed.

The reply, from Brent's Principal Planning Officer (North Area Team) was this:

The local planning authority is required to be proportionate in its approach to non-statutory consultations including determining which other Council departments and external bodies to consult.

The Council’s Transportation Officers are well qualified to provide their professional opinion on these proposals as they have expert knowledge of highway safety matters and an in depth understanding of local highway issues including pedestrian and vehicle movements, as well as detailed knowledge of how the adjacent Fulton Road pedestrian crossing operates.

The Council’s Environmental Health officers (who also comment on noise matters) are well qualified to provide expert comments on relevant issues such as light disturbance.

Whilst the Public Safety Manager was not directly consulted, the Environmental Health officers comment on their behalf on matters such as this, seeking further input from relevant colleagues as required.

It was not considered necessary in this instance to seek the views of the Metropolitan Police with regard to highway safety matters owing to Brent officers’ own detailed local knowledge and expertise in this area.'

On looking more closely at the "new" version of the planning application, I noticed that they have changed the wording of it. Instead of seeking to remove condition 13 from the original planning consent, they are now seeking to vary it.

What is the difference? In practice, nothing at all.

The "variation" seeks to replace the original drawing referred to in the condition (which showed Zone A in yellow, for static images only, on the Fulton Road frontage and Olympic Way, up to the main Boxpark entrance) with a new drawing (the one I have included above).

The effect of the variation would be to remove the ban on moving images on the corner screen facing the pedestrian crossing (as indicated by my red arrows on the drawing). So, by varying the condition, they effectively want to remove it.

If YOU live or work in the area, or use Olympic Way on a fairly regular basis, do you feel that having moving image adverts on that screen would make it less safe for you and others who have to cross Fulton Road?

If so, please consider exercising your right to object to these applications (see "links" in the blog) during the next four weeks. The more objections, the better the chance of preventing the applications from being accepted.

I have obtained a copy of the Brent Transportation Unit comments on this planning application, and their recommendation is this:

'This proposal should be resisted at the current time, on the grounds that the display of video advertising would impair driver performance in the vicinity of a busy pedestrian crossing where drivers need to take particular care, to the detriment of highway safety.'

A copy must have been sent to the applicant, who has then replied with a "Technical Note" from its consultant, SCP.

Now they are trying to get Brent Planners to allow the removal (or so-called "variation") of condition 13, but with a new condition which would make this the subject of a "monitoring condition".

I hope that Brent will not be "conned" into accepting this proposal. There is a public safety risk, as set out by Brent's Transportation Unit, and the condition 13 which was originally imposed by Brent's Planning Committee should not be removed.

Brent's planning Case Officer has let me know that the two Boxpark "moving image" applications have been refused.

The reasons for refusal given in the letter from the Head of Planning, refusing consent, are:

'The proposed variation of condition, by virtue of the size, height, positioning and location of the adverts and the display of moving images, would have a detrimental impact on highway safety, contrary to Brent’s Development Management Policies 2016, Brent’s Emerging Local Plan, the
Wembley Area Action Plan 2015, Brent's Supplementary Planning Guidance 8 - Advertisements (other than shops) and guidance within the National Planning Practice Guidance ‘Advertisements’.'

A victory for common sense, and Brent Planning Officers standing up for their own planning policies (for a change!).