From IpsoMori - interesting to see poverty and inequality moving up in the list of concerns.

The March 2021 Ipsos MORI Issues Index records the first significant drop in concern about Covid-19 since June 2020.The proportion who name the coronavirus as a big issue for the country has fallen from 72 per cent in February to 49 per cent this month. One third see the pandemic as the single biggest issue (34%), a decrease from almost six in ten last month (57%).

While economic concern has held steady, there has been a fall in the proportion of the public naming Brexit as an issue. This month 26 per cent cite the UK’s exit from the EU as a worry, the joint-lowest score for this issue since the vote to leave in 2016 (concern was also at this level in April 2020). This month’s score is seven percentage points lower than last month – and half the level of concern recorded in December 2020 (60%).

There has been an eight-percentage point increase in mentions of the NHS as a big concern: 24 per cent mention it as an issue. Fieldwork occurred between 5 and 11 March, covering the period when the Government announced a one per cent pay rise for NHS staff.

Other issues that have risen significantly from last month include Poverty and inequality (up 6ppt since February), education (up 4 ppt), unemployment and immigration (both up 3ppt), 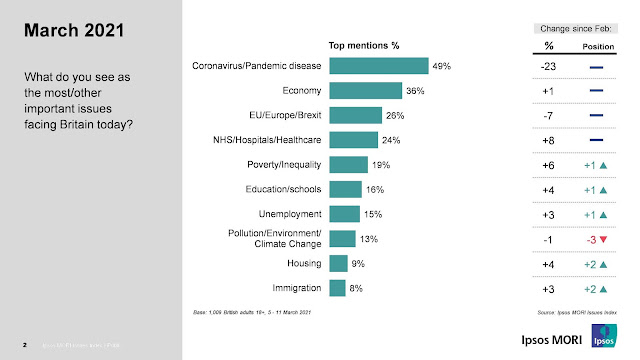 While concern about Coronavirus has fallen across all groups since last month, there is a distinct pattern by age, with older and younger Britons now significantly less concerned than those in the middle age brackets. The proportion mentioning the pandemic as an issue stands at 44% among 18-34s, 59% among 35-54 year olds, and 43% among the over 55s. By contrast, in February these figures were 70%, 76% and 72% respectively.

Those aged 65 and over are among the least likely to mention the pandemic as a big issue; 39% do so, meaning it is their joint-top concern alongside the economy (also 39%). 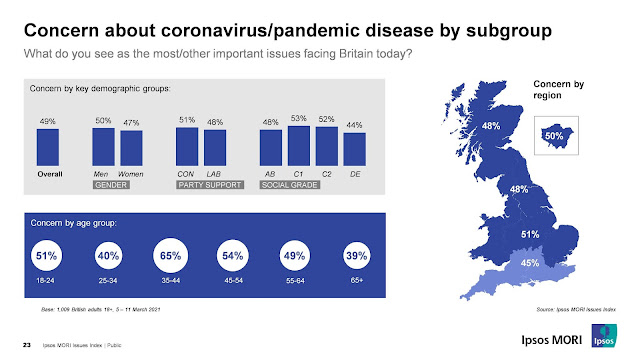