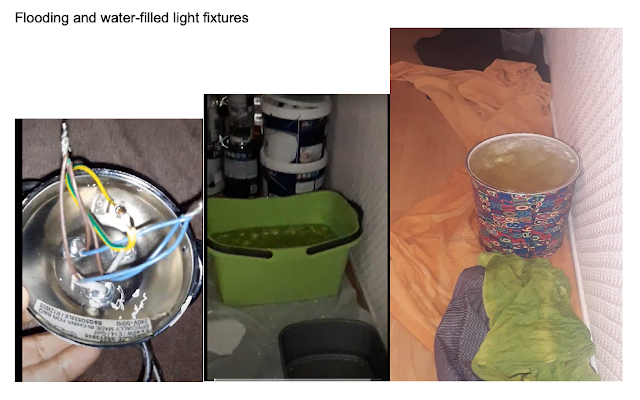 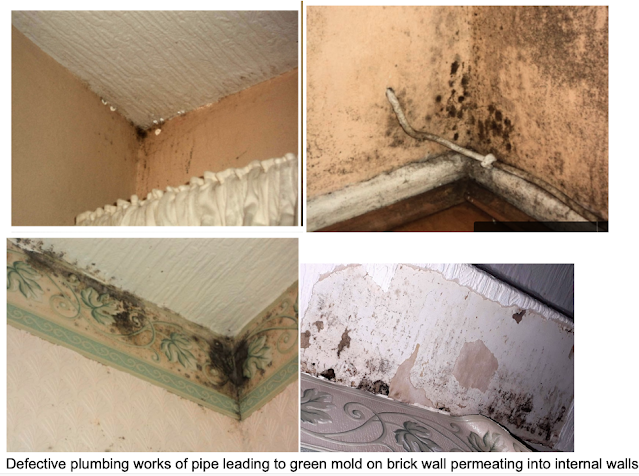 Guest post by ‘Distraught Brent Council Tenants’ who contacted Wembley Matters who hope that publicising this issue will lead to action by Brent Council.

The above images depict the consequences we have had to suffer because of Brent Council Repairs team's negligence and apathy towards their loyal tenants at no fault of ours. Despite numerous complaints since 2013, Brent Council has failed to solve the disrepairs, for which they are solely accountable. Having never had rent arrears and never withheld rent for the past 14 years, the repair team’s inactivity and profound failure to meet their responsibilities has caused us financial loss, distress, and inconvenience, forcing us to attempt to treat the aftermaths of flooding and leakages ourselves. Despite having clearly identified and communicated the source of these issues, the large amount of debris/dead leaves falling from a nearby tree onto the roof in the Autumn season causes blockage of rainfall, the voices of my family have repeatedly been silenced.

Having exhausted all complaint procedures including liaising with Brent’s MP and contacting the Ombudsman and Councillors, with complaints of endless leakages into the property leading to 2 major floods, one of which the Fire Brigade was called to immediately clear 10 inches of contaminated blocked roof water, no genuine action has been taken by the Repairs Team. Upon clearing of roof water due to the Flooding in the premises in October 2020, the firefighter on the scene mentioned that the "roof requires restructuring as gutter channels are too small in width to allow enough water through the pipe” (surprised that such a small opening would provide access for water across such a large area to flow through). An electrician assigned by Brent Council attended 10 full hours after the incident occurred leaving us exposed to the heightened health and safety risk of electrocution that the flooding had caused. Even more appalling is that a contractor, assigned by Brent Council to clear the roof water, arrived 12 full hours after the incident (with no access to the roof to do the works)!

Since October 2020, we have had no lighting to the living room and hallway and the Council has yet communicated a concrete solution or timeframe to this disrepair. The council, leaving this matter unresolved, has further exacerbated recurring internal property damages as winter/rainfall season approaches also disregarding the financial loss and personal expense costs, costing thousands of pounds related to the redecoration with mould treatment, re-furnishing, disposal, and replacement of contaminated goods alongside increased heating and electricity costs. Putting the heating on and dehumidifying for prolonged periods to dry wet walls due to excess moisture has forced us to see at least 4 fold increases in our bills as a direct result.

Numerous complaints have also been constantly raised regarding chronic cold conditions and penetrating damp growth as a direct result of leaking water from the roof exacerbating existing health conditions my family have had to cope with over the years. Mould exposure and a musty, unpleasant odour sourced from the flooding and unbearably cold temperatures have made our home a misery and unsafe to live in. With damaged goods, flooring and furniture being disposed of because of the floods, the Council has not acknowledged this and shamelessly continues to turn a blind eye.

Endless chains of complaints between surveyors, the Repairs Department, and the Chief Executive as a result of the Council's inactivity and poor communication between surveyors and those holding managerial positions within the Service department have caused us concern and worry about our health and safety within the property.

The council neglected to communicate the next steps after a 2-hour long inspection involving evidence being taken by a surveyor in the form of numerous reports and pictures. With Brent Council’s tenancy agreement specifying that:

"Within five working days of this appointment the surveyor will decide what work needs to be done, raise the necessary works orders and write to you with confirmation of the timescale within which this work will be carried out."(p16 of https://www.brent.gov.uk/media/16412335/tenancy-guide-final.pdf),

this has never happened to be the case. Neither of these aspects had been relayed after inspections - deeming it a complete waste of time.

In addition, inspection reports have been reported missing with surveyors suggesting they have no access to previous reports. A high turnover rate of surveyors has also meant newly appointed surveyors have no previous understanding of the case since 2013 resulting in a vicious cycle of visits and missed reports. Having different surveyors enter the property for "inspections" and making verbal expressions of supposedly "reporting and following up" of reports have proved unsupported by genuine action causing us to believe this as a threat to our personal safety.

●      Project Manager in Sep 2018 stated: "Surveyor, attended your home...however left shortly thereafter and did not supply the information which you have explained were discussed”

There have been many occasions whereby surveyors have randomly shown up whilst others failed to attend within their booked slots. However, as would any other resident, we are not obliged to allow access into the property for a random show of surveyors without pre-scheduled appointments in agreement with the tenant. This, once again, indicates the lack of transparency and communication between the Repairs Team, surveyors and tenants.

●      October 2020: Roofer attended property with no access to the roof as council did not provide key and  said he would not be able to attend roof physically “due to health and safety reasons” despite being a roofer. Said it was “mostly paperwork” and would hear from the Council soon. It has been more than a year since and this has not been the case.

●      We overheard a contractor asking the other whether he knew the resident he initially spoke to from within the property was a "black lady” before knocking on the door. Is Brent tolerating such poor standards by paying thousands to partner with contractors who seem to be endorsing such comments? These events certainly seem to conflict with Brent Council’s Equality Strategy 2019-2023 whereby they are committed to:

“ensure consistency in the delivery of equality across the council. Contractors [are]...to comply with equality duties set out in the Equality Act 2010” (https://www.brent.gov.uk/media/16415181/equality-strategy-2019-23.pdf )

Lack of communication and no responses from Repairs Team/MPs/Councillors

●      We have been complaining about the inactivity of repair works more recently but since June 2021 have had no response, email or communications from the council.

●      An email sent 2nd of June 2021 to Housing Councillor requesting that she put pressure on the repairs team to escalate the case has not been responded to since.

Each and every Repairs staff member, contractor & MP/Councillor has failed us profoundly. It is a complete disgrace and altogether unacceptable that my family and I must suffer at the expense of the failures of Brent Council’s Repairs team for an excruciating period, who are being directly reimbursed for their inactivity by each taxpayer. Each resident should be able to enjoy a “habitable” home, be entitled to the basic repairs service they deserve and not have to experience the outcome of poor communication between and standards of contractors and senior members of the repairs team!

This is an awful account of inaction when action is desperately needed, and appalling action when it does happen ! These tenants should be helped!What on earth is going on in this Borough that people can be treated like this?