As Martin reported last month, Cllr. Shama Tatler missed the Full Council meeting on 22 November, so was not there to answer my supplementary question about the (lack of) affordable Council housing proposed for Brent’s Cecil Avenue development, on the vacant former Copland School site. I had not been satisfied with the original answer to my Public Question on the subject.

A written answer from the Lead Member for regeneration was promised, but a subsequent Member’s Question (from the Leader of the opposition), on whether the written response to me would be circulated to all members of the Council, did not appear to receive an answer.

I have now received that written response (I will ask Martin to attach a copy below), and to ensure that all councillors do have the chance to consider it, I have circulated the document to them with the following email. I am sharing that email publicly, so that any Brent resident can ask their local councillors how they have responded to the points raised by my question, and Cllr. Tatler’s “answer” to it:-

At the Full Council meeting on 22 November, your colleague Cllr. Shama Tatler was not available to answer my supplementary Public Question about affordable Council housing at Brent Council’s Cecil Avenue development (on the vacant, Council-owned, former Copland School site in Wembley).

I received her written response on 7 December, and as it is unclear whether this has been circulated to all members of the Council, I am sending you a copy now. I believe that this matter raises important points, and you may wish to share your views on them with the Lead Member for Regeneration.

As well as the response, it is best that you know the question that she was meant to be answering (because I do not think that they key points have been answered). This was my supplementary question:

‘Brent urgently needs more affordable Council homes, and it could be building 250 of these at Cecil Avenue now.

But only 37 of the 250 in your plans will be for affordable rent, while 152 will be for private sale by a developer.

Some of the £111million GLA grant could be used to provide social rent housing there.

Instead, you plan to use it for infill schemes on existing Council estates, which may be years away.

What justification will you give for these plans, when asked by families who’ll have to wait much longer for a decent home, and existing residents who’ll lose the green spaces on their estates?’

In an article published in the “Brent & Kilburn Times” on 18 November your colleague, Cllr. Ketan Sheth, wrote:

'The value and cost of land in London is at an all time high: therefore, building on land already owned by the council means the building costs are lower and all of the new homes can be let at genuinely affordable rents.'

But under the proposals for Cecil Avenue, approved by Cabinet on 16 August, and for which Cllr. Tatler is the Lead Member, only 37 of the 250 homes will be for London Affordable Rent, and none will be for Social Rent (which the Brent Poverty Commission Report in 2020 said should be the Council’s priority for genuinely affordable homes).

The attached response from Cllr. Tatler makes a similar point about the importance of using Council-owned land to provide affordable homes:

‘Many of the current and planned future developments containing affordable housing will be on ‘re-purposed’ council owned sites that mean there is no acquisition cost and that because of ownership, schemes can be developed at pace.’

The ‘council owned site’ at Cecil Avenue is vacant, and full planning consent for the 250-home project was granted in February 2021. The scheme there could ‘be developed at pace’ for affordable Council homes, but under Brent’s current proposals 152 of the new homes there will be for private sale by a “developer partner”.

This is how I (and, I suspect, many other Brent residents) see the Council’s current proposals for the Cecil Avenue development:- 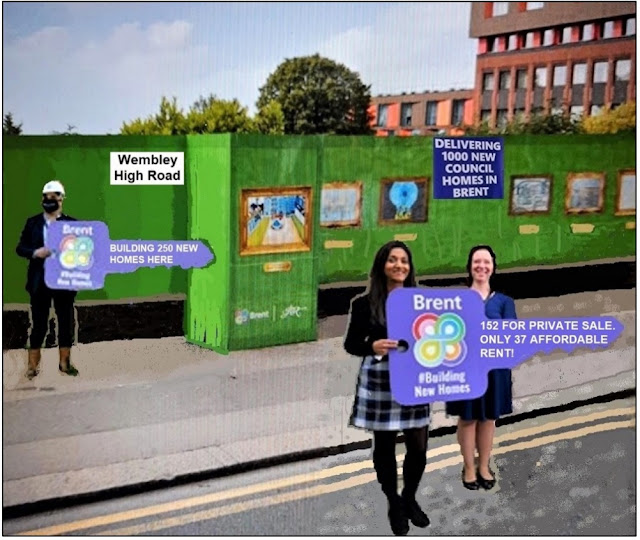 This image is a parody of the Council’s publicity photographs for its “New Council Homes in Brent” programme, but the point it is making is a serious one.

Do you want the citizens of our borough to see the hypocrisy that the Council’s current proposals display? Perhaps ask yourself the question which I put to Cllr. Tatler:

‘What justification will you give for these plans, when asked by families who’ll have to wait much longer for a decent home, and existing residents who’ll lose the green spaces on their estates?’

If you agree that the current proposals for the Cecil Avenue site don’t seem right, please share your views on them with the Lead Member and the Strategic Director for Regeneration. Thank you. Best wishes,

Philip Grant
(a long-time Brent resident, with no party-political allegiance)

Councillor Tower Block Tatler is obviously trying for a new name, yes Pinocchio!! How can she say "The council is also prioritising the delivery of 3 bed + family sized accommodation as this is the area of greatest need and will help enrich existing communities across the borough." when most of the property is one bedroom or studio accomadation? By her copying Boris Johnson's constant lying and bending of the truth does not make you popular Councillor Tatler.

Councillor Tatler now surely has to go, along with some of her absolutely awful Labour compatriots.

Brent clearly doesn't plan for people living in its new towers (no gardens) to have healthy access to park scale green spaces close by and is instead green spaces "Re-purposing….. At pace," as Cllr Tatler says.

However, the remaining public owned natural parkland flood defence system of South Kilburn 're-purposed at pace' adds a very different area wide major floods risk to Brent's plan. A partitioned ballot where only less than1/4 of South Kilburn households was deemed worthy enough to be allowed a ballot vote! But, what about the Maida Vale Conservation Area, City of Westminster becoming Big Venice/ the Grand Canal due to continual flooding from now on? I fully expect that City of Westminster is knocking on Brent's door regarding its creating obvious massive scale new flood liabilities.

I note that the Uncle Building, built on Council Property at the old Chesterfield House site out of the 249 built 70 were handed over for Social Rent. All the rest are for Rent by Uncle at Market rates.

Wembley Place, formerly Brent House approx 45 have been handed over for Social Rent by Genesis/Notting Hill. Approx 140+ are for Shared Ownership and the rest for Private Sale. It would be interesting to know how many have actually been sold for £400,000+?

There is a large sign on the hoardings of what was Stonebridge Adventure Playground site being built by Higgins(yes the developer who is now in trouble over the South Kilburn Estates dire conditions) stating that all 73 Homes will be Council Homes I assume at Social Rent.

Did I miss a meeting? as many years ago I seem to remember that all new builds were to be split, 33% Social, 33% Affordable/Shared Ownership and 33% Private or is my memory failing me? or have our Council and Developers decided that this is not a viable option?

Well over half a million homes are kept banked as empty in the UK.

The current political consensus has clearly run out of destructive road and instead new taxation nudges are needed to get these half a million plus already built/ already made homes back into full market use again for homeless families. Another environmental advantage apart from already being built, is that these homes are scattered not contained and therefore it is not politically possible to silo families into designed to be non place tower nowhere non towns.

Weird idea? Increasing an estates population by five times by removing all of its facilities and parkland flood defences is weird.

It's obvious what's causing this logjam :classism.
The so called middle and upper class people are evidently prioritized
by the developers, while the working class are treated according to their bank balances and social status.
Matters are made worse by the weak will nature of the current council
and the developers take full advantage.


Brent to 'build back wetter' by design?

Not listed by Cllr Tatler's schemes are the 56 new homes at Chippenham Gardens NW6, nearing completion by Higgins on the site of cleared social rent homes and taking part of the natural flood defences. 26 homes to be affordable & Help-to-Buy as well are advertised.

Directly opposite this new Higgins block of design note is John Ratcliffe House (mid –rise social rent housing built in the late 1970's) which like many other old social rent blocks in South Kilburn is flood raised and has no ground floor homes unlike the risk hungry new developments of post year 2000.

In the first Victorian housing development, South Kilburn Vale was unpopular with buyers due to frequent flooding; those houses had servants living in the basements with the main homes always being above floods raised. It would be interesting to a) know where the affordable flats are in this new block? and b) worth Brent becoming late in the day site agile and mitigating flood risk by designing the renewed public square at Chippenham Gardens larger scale to pond flood waters and thereby hopefully protect these new homes which have been built entirely ignoring high flood risk.

The current Brent Council affordable housing policy is set out at DMP15 in its Development Management Policies document of November 2016:

a. Brent’s Core Strategy policy CP2 sets the target that 50% of new homes delivered in the borough will be affordable. The maximum reasonable amount of
affordable housing will be sought on individual residential and mixed use
developments on sites with the capacity to provide 10 or more homes.

b. 70% of new affordable housing provision should be social/affordable rented
housing and 30% intermediate housing at affordability levels meeting local needs.'

Brent is "lumping together" Cecil Avenue with its Ujima House site across Wembley High Road, in order to claim that it is meeting the 50% requirement (even though Ujima House only has outline permission, and will require the demolition of the existing office block before any new home can be built there).

Looking at Cecil Avenue as a separate site, at least 125 of the homes would need to be Affordable, of which 88 should be social or affordable rent to meet Brent's own policy requirements.