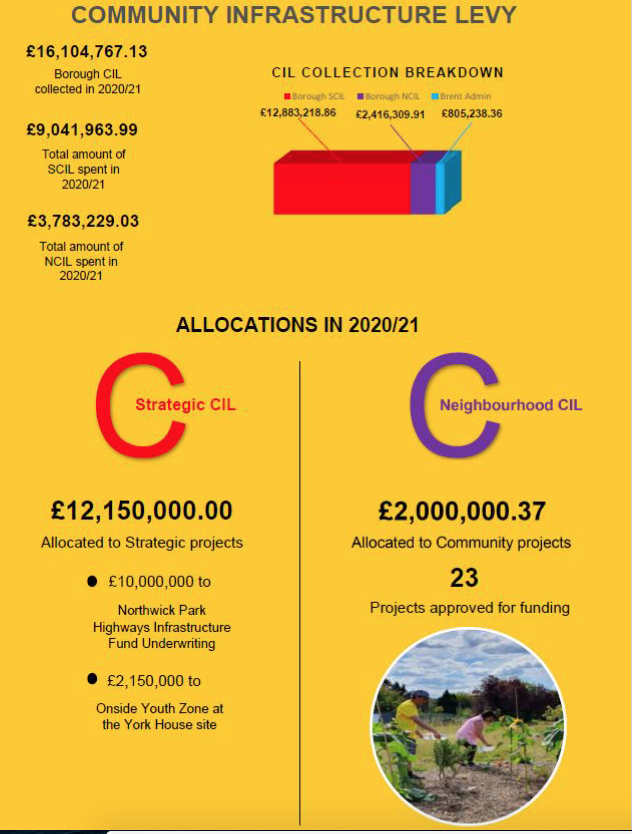 There are several headline items in the report. The first is the total amount of money in the CIL pot, money derived from the contribution of developers to the general infrastructure of the borough and second, the proportion of that which has not been allocated. 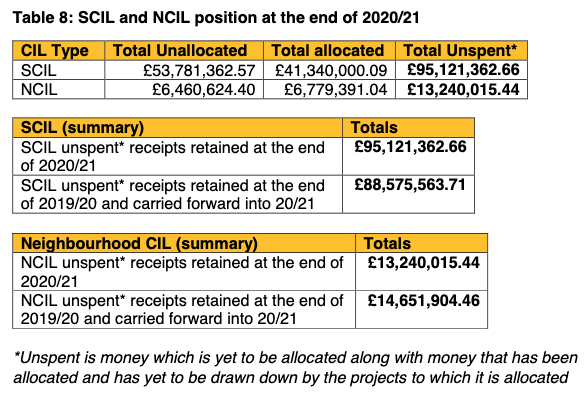 So what was SCIL spent on? Wembley got the majority of the funding and that is Wembley Park - Tokyngton Ward (Muhammed Butt's ward) rather than other parts of  Wembley.

Wembley Two Way Working & Wembley North End Road - As identified in the Core Strategy and Wembley Area Action Plan, there is the need for new road connections and junction improvements to support the ongoing development of the  Wembley Growth area. These include two significant road improvement schemes which have been implemented to improve traffic flow and connectivity through the area.

The first phase of the Wembley Two Way working project was completed and operational on 22nd March 2020 and plans for the second phase and further improvements on First Way and South Way are being developed. The new North End Road connector to Bridge Road opened on 11th June 2021 ahead of the EURO 2020 tournament initially operating as a T junction. The Highways and Infrastructure Team are working with Transport for London on signalising the new junction by the end of the year.

Olympic Way Public Realm Improvements – The improvements are a recognition that Wembley Park is an area of national and international importance. The high quality public realm supports the ongoing transformation of the area into a thriving, attractive environment where people want to live with access to shops and entertainment.

Public and private investment for Olympic Way has involved a new treatment to the Bobby Moore Bridge, new hard and soft landscaping throughout, a new crossing at Fulton Road, new lighting, trees, street furniture, wayfinding, WIFI, a new public square, and replacement of the ‘pedway’ with steps, lifts and flexible covered space to form an iconic new entrance to the national stadium.

Morland Gardens Education Facility - Is an investment in skills and employability prospects for residents. Cabinet have agreed SCIL contribution towards the redevelopment of the existing adult education facility in Morland Gardens, Stonebridge. The new, mixed use redevelopment will provide an expanded and improved educational facility, along with workspace, a community space and 65 new council homes

The CIL Regulations 2010 stipulates that at least 15% of CIL receipts must be spent on neighbourhood project.  Of that 15% up to 25% may be spent on priorities identified by Neighbourhood Forums. Two are established in Harlesden and Sudbury Town and another is under consultation in Kilburn. Neither of the former were allocated anything and £1,5m of the total £2m went to Wembley. Brent Council points out that the projects are recorded in the originating borough but may be for services across the borough, Some of the projects are in initiatives of the Council itself.

In line with the CIL Regulations, NCIL can be used to fund a very broad range of facilities such as play areas, parks and green spaces, public realm improvements, cultural and sports facilities, healthcare facilities, and other community facilities provided it is concerned with addressing the demands that development places on the area. The NCIL must be spent on priorities agreed in consultation with the local community. These priorities must be aligned with the needs of the local community.

CIL funding has no immediate deadline and therefore is available on a rolling annual basis. It is important to recognise that CIL receipts can only be spent on capital projects, although associated revenue spending to maintain those capital items is also permissible 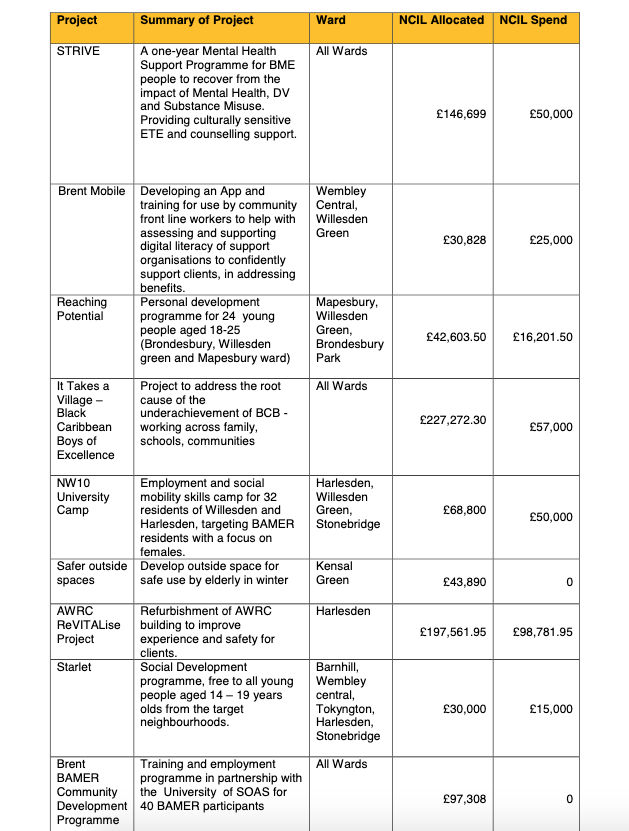 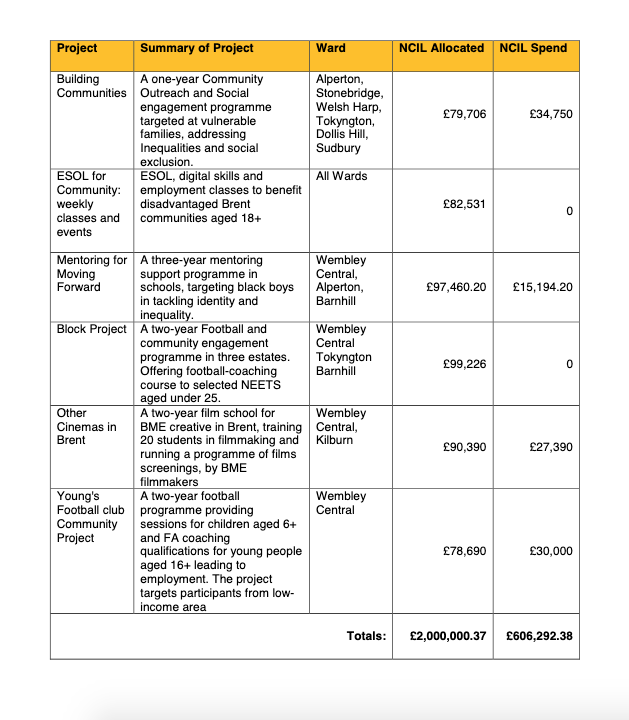 The discrepancy (often large) between the amount allocated and the actual spend in some one-year projects  is   likely due to the affect of Covid restrictions.  Other projects cober 2 - 3 years. 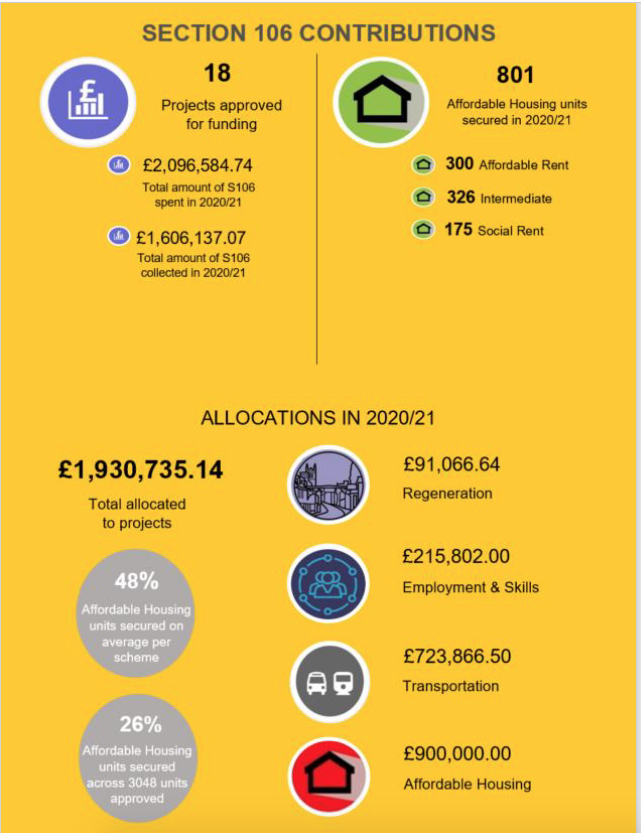 Section 106 funds are secured through planning obligations and are site specific (rather than general) to mitigate the impact of development. Clearly the claim on 'affordable housing' needs to be broken down as 'affordable' is such a slippery concept in Brent usage. 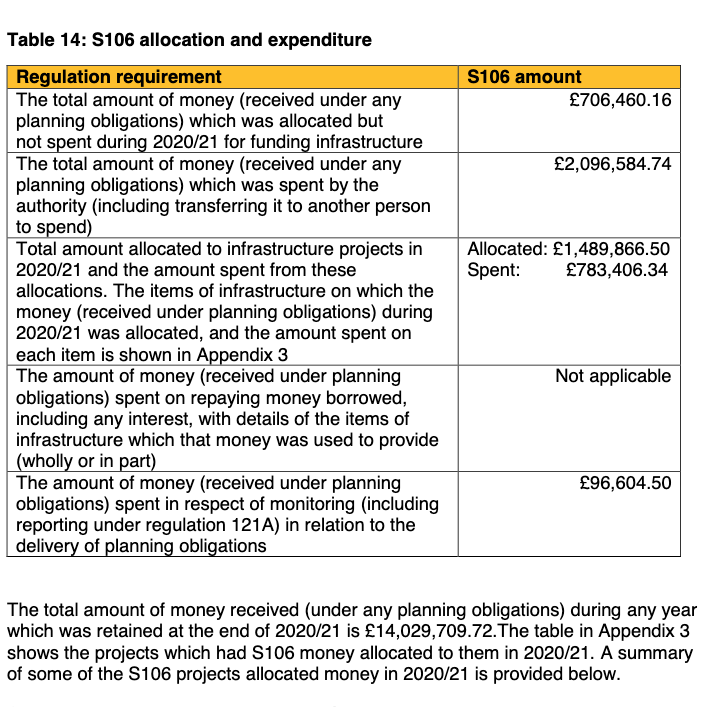 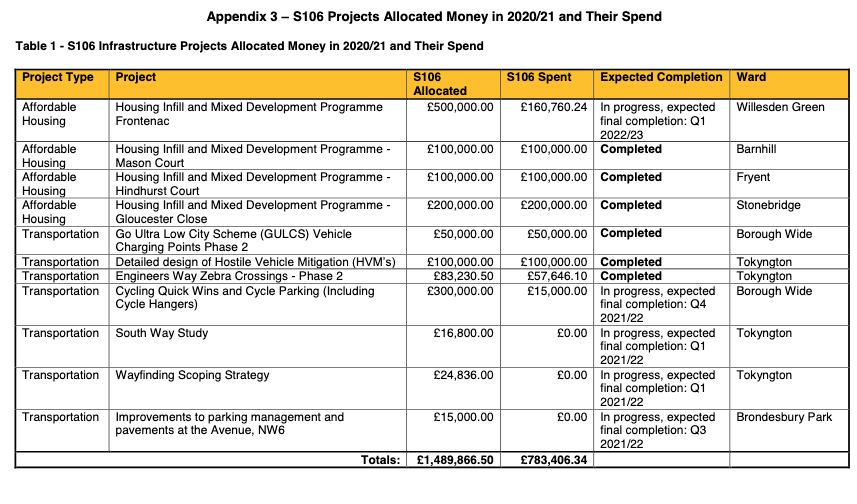 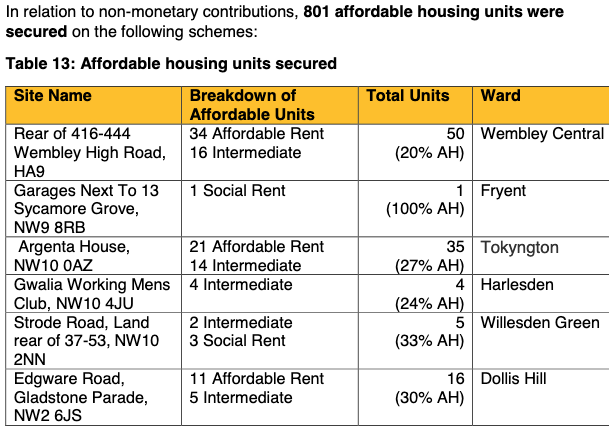 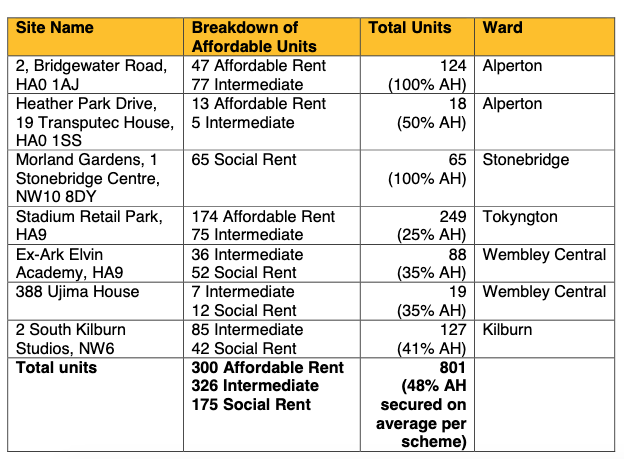 SECTION 278 HIGHWAYS
Paid under the Highways Act where the development requires changes or improvements to the public highway. 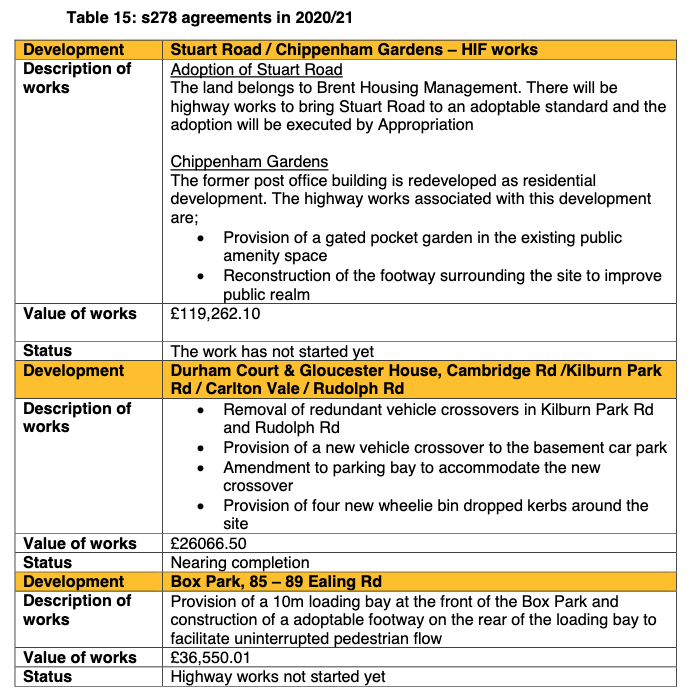 The major problem is that in growth area zones like South Kilburn- 6000 population in year 2000 to 36,000 in 2041 (population already more than doubled/ with 35+ sites pending to 2041), housing and underground car parks is the only new infrastructure.

In developer colonial rule, all existing communal infrastructure such as fine parkland flood defences, schools, health and community centres are held hostage as surplus brownfield land site 'opportunities' to later housing block design on with planning permission and then sell on to developers with Brent being full responsible.

My comment relates to "Table 13 - affordable housing units secured" in the article above.

That is not just my opinion. A friend of mine, who is a Labour Party member, has told me that at a Brent North CLP meeting a couple of months ago, Shama Tatler (Lead Member for Regeneration) was taken to task by members, and expected to report back on "so called affordable housing". As far as I am aware, that report back is still awaited.

I am still waiting for Cllr Tatler's written reply to my supplementary question (from the Full Council meeting on 22 November) about affordable Council housing at Brent's Cecil Avenue site. This has been promised by 6 December, and I will share it with "Wembley Matters" readers once I've received it.

However, the situation there appears even more confused, after the information about that site (described there as 'Ex-Ark Elvin Academy) in Table 13.

Of the 250 homes to be built there, Cabinet voted on 16 August 2021 that 98 would be "affordable", with 37 for London Affordable rents and 61 as Intermediate housing.

The table above shows 52 for Social Rent (which is a lower rent than London Affordable rent level) and 36 as Intermediate housing. That only makes 88 "affordable" homes - does that mean an extra 10 homes for private sale, giving 162 out of the 250 for a developer to sell at a profit?

And are there really going to be genuine Social Rent homes here, or is the Council mis-describing London Affordable rents as "Social Rent" (WHICH IT IS NOT!).

Another part of the Council's Wembley Housing Zone is Ujima House, just across the High Road. According to the August 2021 Cabinet decision, the 54 homes there will all be for London Affordable rent.

But Table 13 refers to only 19 affordable housing units there, 12 for Social Rent and 7 as Intermediate housing (which means either at Intermediate rent levels, or for sale under shared ownership, neither of which options is truly affordable for most Brent residents in housing need).

Finally, my old stomping ground, 1 Morland Gardens. Table 13 states that all 65 homes which Brent Council proposes to build here, once they have demolished the locally listed Victorian villa, will be for Social Rent. Unless there has been a secret change of plans, that is untrue. Brent's Cabinet decided that these should all be for London Affordable rent, NOT the lower, and genuinely affordable, Social Rent.

It's good to see in Table 6 (Strategic CIL allocations in 2020/21) that £2,150,000 has been allocated for the Onside Youth Zone facility for young people, to be built on the car park at York House, Wembley Hill Road.

However, Brent's Infrastructure Delivery Plan, one of the supporting documents for Brent's Local Plan for 2021 to 2041, and the final draft of the Local Plan itself (due to come into force in the first half of 2022) say something different for this site. They say that the York House car park will be the site of a new Ark Somerville Primary Free School. Is Brent's Local Plan out of date, before it has even come into force?

And £285k of Strategic CIL has already been spent in 2020/21 on the "Morland Gardens Education Facility" (Table 7). What has it been spent on?

The documents claims that this 'is an investment in skills and employability
prospects for residents.' But no work has actually been carried out yet on 'the redevelopment of the existing adult education facility in Morland Gardens, Stonebridge.' The Brent Start college is still there, waiting to be decanted, so that the Council can demolish the beautiful, locally listed heritage building which was refurbished to provide it with a new and inspiring home in the 1990s.

How much trust, in the accuracy of their "facts", can you put in these glossy Brent Council reports?