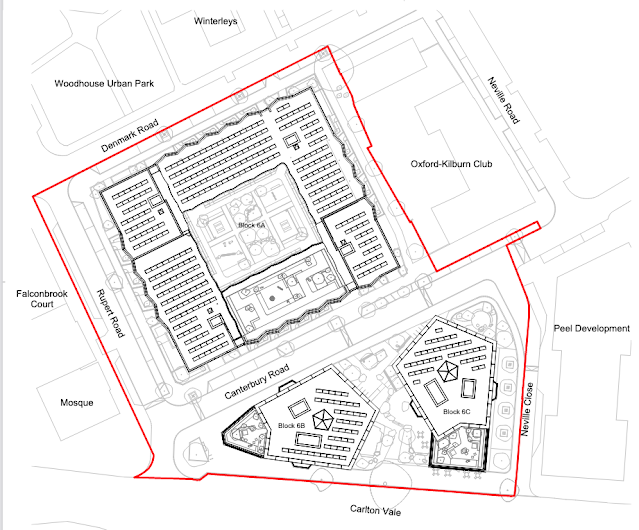 A group of Craik Court residents have objected  to the above demolition and redevelopment on the South Kilburn Estate on the following grounds:

We object to this application because

1.   Residents were involved in the three consultations during the spring and summer of 2018. The plans in this application do not resemble what was proposed in the final consultation event in September 2018. In these consultations residents said strongly that they did not want buildings over 10 stories high.  We were given the impression in these meetings that what we were shown in September 2018 would resemble what was built. This is not the case.

2.   We do not want high rises in South Kilburn. The application says buildings up to 16 stories will be built. This goes against Brent's Local Plan for the area Craik (p.201) Crone p.202 only mentions up to 14 stories.  Why does this application add 2 extra stories? In the exhibition we were shown the buildings are 8 and 9 stories high. But in this application 16 stories are proposed.   In the Supplementary Planning Document (SPD) for South Kilburn on p48 it says  that the regeneration  plans " will not propose radical divergence from the mansion block typology" 16 Stories is a radical divergence from this . It has a knock-on effect of causing the area to be too densely populated and the loss of light to other blocks in the area.

3.   Loss of parking. At the moment Craik has 22 parking spaces, Crone has 28 parking spaces . These spaces are very much in demand, There seems to be no new spaces in these plans but many more dwellings.  In fact there is a heavy loss of spaces. While we agree that with climate change we should discourage car use, many people living in the area need cars for work or because they are not able to get around without them. Where will they park?

The parking on the new plans is only on the road. These roads are now filled with the numbers of people living there. If these buildings are built there will be many more households needing  parking all looking on the same roads for very limited parking.

4.   Loss of light - The height and density of these blocks, if allowed  to go ahead, will cast shadows on the homes and open spaces behind them. This is unacceptable.

5.   Density -  if the number of new homes asked for in this application  is allowed it will put an enormous strain on the already strained infrastructure in the area.  Services such as doctors are over stretched.  There are no doctors at Kilburn Park Surgery and the other local surgery, Lonsdale Practice is full to the brim.

7.   Loss of play space.  The application has a huge loss of playspace which is not made up for with the new  park. The new park was built to replace other play spaces that have already been lost. There is a space in the middle of the building on Canterbury Road but that is only for residents of that block. It cannot make up for open accessible play spaces lost.

FULL DETAILS OF THE PROPOSAL HERE

Where will they house the residents when they have to move out,residents in nearby Merle Court were told they had to move out,there were no nearby flats to move into,so some were sent to places as far as Burnt Oak,only for Catalyst to subsequently tell residents they could stay in Merle court,bloody housing associations dont give a stuff about tenants

They are a bit like the Council then aren't they?

When the first masterplan for regeneration was produced by Brent Council many moons ago, we were promised there would be no more high rise blocks in South Kilburn. A long-forgotten promise, of course.

Let's face it, Brent Council lie to us so they can support their developer mates.

Very true, South Kilburn residents did not want any new high rise blocks and Brent eventually agreed to that formally in 2004 (a "Deal" since unilaterally cancelled). Brent also accepted a seven comprehensive and holistic "people as well as place" social, education and health regeneration themes major change "Deal" which was also (all except social rent housing clearances) then unilaterally cancelled.

Pete and David have made good points, but it is not just South Kilburn that Cllr. Butt's Cabinets since 2012 have done the dirty on.

An Alperton Masterplan, adopted after public consultation in 2011, was meant to restrict the very tallest buildings in the area to a maximum of 17 storeys. After a developer, who'd had a recent meeting with The Leader, was given planning consent for a 26 storey block, opposite Alperton Station, Cabinet quietly dropped the Alperton Masterplan the following year, as being "out of date".

And any number of examples from Wembley Park of highrise overdevelopments could be given, that went against previously agreed planning policies.

The taxpayer costs of these brent mock non legally binding masterplans is also alarming. The south kilburn final plan of 2004 adopted by brent cost three million pounds such was the scale, reach, detail and intensity of its con sult.

We can do whatever we want, colonial style plan disregard is what has emerged since..... Brent swapping two school land uses to re build them on brent kilburns only park sized park natural flood defence.