This Guest Post by Philip Grant reveals an interesting moment in Brent history and perhaps our national history.

This article results from a local history enquiry received in October 2021. What did we know about a British Indian Union Garden Party, held at 43 Chalkhill Road Wembley in July 1934, or Mr & Mrs R.S. Nehra who hosted it? The initial answer was “nothing”, but further research online by several Wembley History Society members began to uncover a story which deserved to be shared with a wider audience. That’s what I hope to do here. 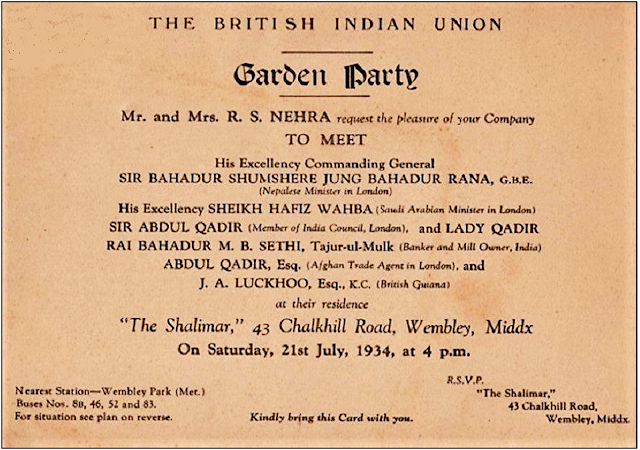 Ram Singh Nehra was not the first Indian to live in Wembley. A former farmhouse at the eastern end of what is now Wembley High Road was renamed “Rhampore” in 1882, when it became the residence of His Highness Rajah Rampal Singh. He was one of the founder members of the Indian National Congress Party, and started “The Hindusthan” monthly newspaper while living here, before returning to India as ruler of Kalakankar in 1885. After his first (Indian) wife died in 1871, he had married an English woman, Princess Alice.

Mr Nehra, we discovered, was a solicitor. He was also Joint Honorary Secretary, along with an Englishman, of the British Indian Union, an organisation aimed at fostering good relations between people in this country and the Indian “Dominion” that it ruled. It’s interesting to note that the VIPs who guests were invited to meet included an Afghan, a Nepalese and a Saudi Arabian. As well as the invitation, we also have photographs of the garden party, and the Nepalese Ambassador who attended it. 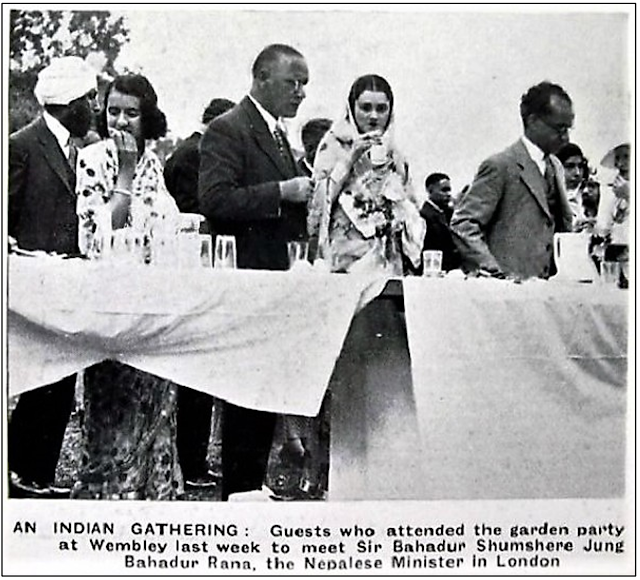 A magazine photograph and caption about the garden party in July 1934. 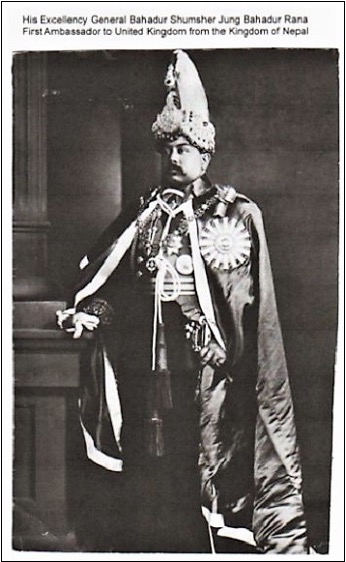 General Bahadur Rana, the Nepalese Ambassador, in full uniform. (Images from the internet)

As well as his involvement with the British Indian Union, Ram Singh Nehra was also the President of the Central Hindu Society of Great Britain. In that capacity, he had welcomed General Bahadur Rana at Victoria Station, when he arrived to be his country’s first Ambassador to the United Kingdom in May 1934, greeting him with a garland of pink and blue sweet peas.

In a short speech, Nehra welcomed the General to London, as the only representative of an independent Hindu State. He went on to say: ‘The independent kingdom of Nepal is the ancient Raj that has preserved its integrity and independence, and has withstood all foreign attacks and attempts at conquest.’ The “Daily Mirror” reported this, with a photograph. 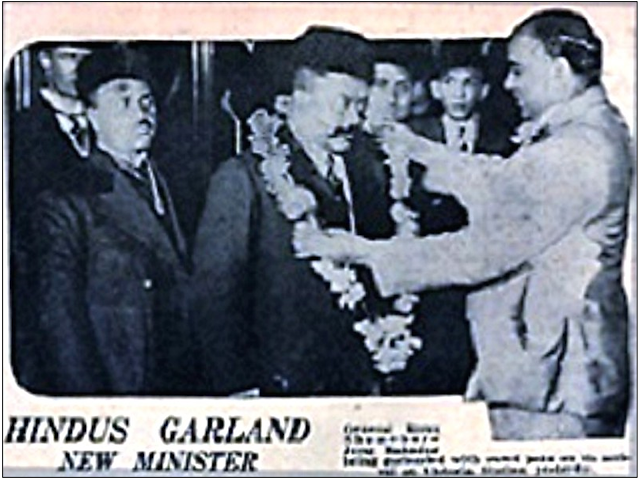 Another organisation that Nehra was a member, and early Treasurer, of was the League of Coloured Peoples. This had been founded in London in 1931 by the Jamaican-born doctor, Harold Moody, with the aim of fighting discrimination against coloured people, especially in employment and housing, and to improve relations between the races.

It’s magazine “The Keys”, in July 1933, reported a speech given by Nehra to a conference the League had organised. His subject was “The East African”, and he spoke from personal experience. He described East Africa as ‘the land of the future’, but said that racial relations there were very bad, and that ‘the African did not have a very happy time’. ‘The lot of the Indian’, he said, ‘was a bit better than that of the African, but they were beginning to realise that co-operation between them was essential if any progress was to be made.’

To explain how Ram Singh Nehra came to be in East Africa, it is probably best to start at the beginning. He was born in the Punjab city of Ludhiana, to a well-off family, in 1896. After matriculating from the local Arya High School, he went to the Government College in Lahore, gaining a B.A. Honours degree in 1917. Because of the First World War, he had to wait until 1919 before he could come to England, to study law at London University.

Nehra qualified as a barrister of the Middle Temple in 1921. There was little chance for an Indian to exercise his profession successfully in this country, so he started his practice at the High Court in the British controlled Uganda Protectorate. After finding that Uganda was ‘too small’, he moved Britain’s Kenya Colony and the seaport of Mombasa. Here he soon became Secretary of the Mombasa Indian Association, and involved in local social and political life. 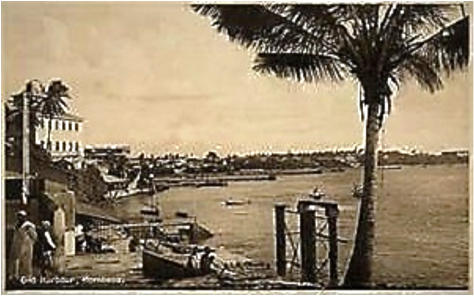 A 1920s postcard view of the Old Harbour, Mombasa. (Image from the internet)

It was in Mombasa that Ram Singh met the future Mrs Nehra. Eileen Myfanwy Brazel was born in Swansea in 1897, and shipping lists record that Miss E.M. Brazel, a short-hand typist, boarded a ship bound for Mombasa in June 1923. I would assume that she had been recruited in the UK for a job in Kenya, either by the colonial government or a large trading company. How ever she came to be in Mombasa, she met Nehra, and married him.

Eileen must have returned to Britain when expecting their first child, as their son, Grenville Brazel Nehra, was born at her parents’ home in Swansea in December 1925. Nehra himself remained in Mombasa, carrying on his profession in the courts there, and becoming a pillar of the Indian community.

There had been trading links between India and East Africa for centuries, before indentured labourers were brought from India in the 1890s to build the Uganda Railway. Some of these men settled in what became the Kenya Colony, and their families and other Indians came to join them, particularly from the Punjab and Gujerat.

By the 1920s, the Indian and Arab communities were allowed a small number of seats on the Colony’s Legislative Council. At first, they refused to nominate candidates for these elections, demanding as many seats as the British (although there were none for the native Africans!). Their demands were ignored, but the Colonial Government appointed local Indians to fill those seats, and Ram Singh Nehra became a member of Kenya’s Legislative Council.

I don’t know exactly when Nehra left Kenya, and finally moved to Wembley. The birth of Mr & Mrs Nehra’s second child, Sheila, in July 1930 was registered in the Hendon District, which included Wembley, so they may have been living at 43 Chalkhill Road by then. Their home, “The Shalimar”, was part of the Metropolitan Railway’s Chalkhill Estate, laid out on land the company had bought in the 1880s to build their tracks across, and developed as part of “Metroland” after the First World War.

Nehra was certainly practicing as a solicitor, from an office in High Holborn, by 1930. As well as directory entries for him, a case in Willesden County Court, where he was acting for the claimant, was reported in the “Daily Herald” in March 1931, under the headline “House for Veiled Woman and Retinue”!

Not content with his legal work, and the organisations he was active in, Ram Singh Nehra also founded and edited a magazine, “The Indian”. He said: ‘This journal is a link between Indians all over the world. The more they know of each other, the better for all concerned.’ Its aim was: ‘To protect, strengthen and further the political, social, economic and general welfare of Indians everywhere.’ The annual subscription in 1935 was 9 shillings, or 6 Rupees (post free).

As well as articles by contributors on subjects such as Swaraj (self-rule) for India, and the caste system, challenging prejudice was one of the main subjects for Nehra’s own pieces. In a 1935 article, headed “Colour Hatred” he began with an incident at a London council meeting:

‘It is most regrettable that an increasing amount of evidence is available on the question of colour hatred in England, Germany, Italy, etc. Recently, Alderman Richards, a Conservative member of Finsbury Council, London, passed an unbecoming remark against Dr C.L. Katial, an Indian member of the Council, simply on the ground of colour.’

He reported that a motion had been tabled, expressing ‘profound abhorrence’ of the Alderman’s personal attack on a distinguished fellow member, and his ‘refusal to withdraw his unseemly remarks.’  When the motion, under which the Council ‘unhesitatingly dissociated itself’ from what Alderman Richards had said, because it ‘militated against the maintenance of harmonious relationships between persons of different races’, was put to a vote by the Mayor: ‘the local Council passed it by 13 votes to 11.’

Nehra’s article went on to give further examples of colour hatred, from elsewhere in London, in Nazi Germany and Fascist Italy. It concluded with these thought-provoking paragraphs:

‘We wonder where these hatreds by the white men would lead them to if the coloured people begin to retaliate, on the ground of the colourless skin of the semi-civilized Europeans who simply pride themselves on the absence of the sun-resisting pigment in their skin.

[George] Bernard Shaw at the conclusion of his South African tour gave as his considered opinion that the best way to avoid world war and ensure peace was to encourage marriages between coloured and colourless races in large numbers.’

In reporting the Finsbury Council vote (above), Nehra had noted: ‘The eleven represented the Tory Party.’ His own views were more to the left, and there is clear evidence of that. The previously separate Urban Districts of Kingsbury and Wembley agreed to merge from April 1934. Elections were arranged for all of the seats on the new Wembley Council, to take place in March. When the candidates were announced, this was the entry in the “Wembley News” on 2 March 1934 for Kingsbury’s Fryent Ward:- 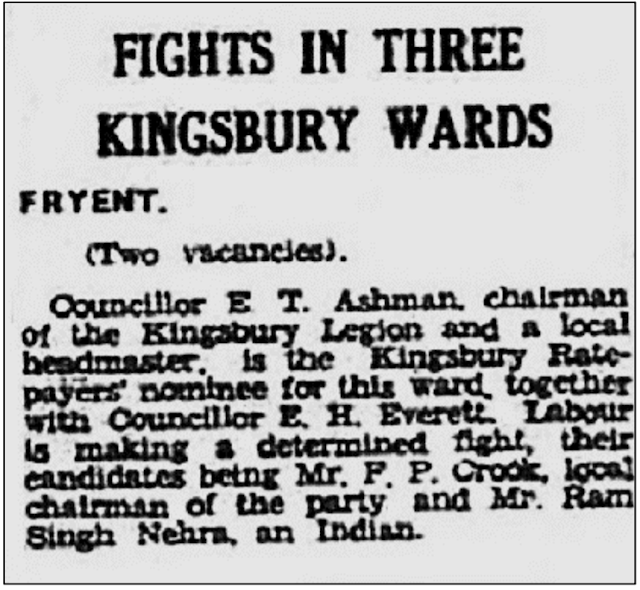 Ram Singh Nehra, ‘an Indian’, was standing as a Labour Party candidate for a seat on the new Wembley Council. You can see him pictured among the photos of those candidates, from the 16 March 1934 edition of the “Wembley News”:- 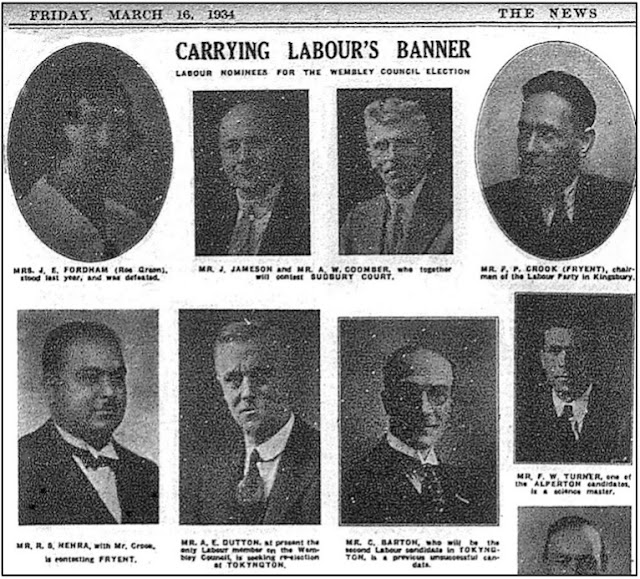 Some of the Labour candidates, pictured in the “Wembley News”. (Images courtesy of Brent Archives)

If elected, Nehra would not be the first foreign-born local councillor (see José Diaz – the Spanish Chairman), but would the people of Wembley in the 1930s vote for a man who wasn’t white?

I hope you can join me next weekend, for Part 2, to find out.