Message from campaigners for the Counihan family.  Their plight will be repeated many times across the borough as the Coalition's housing benefit cap hits more families. 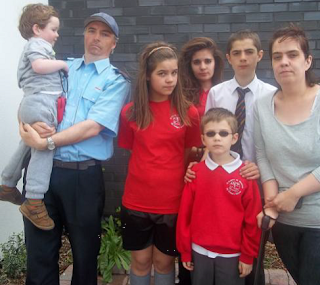 We are coming together to demand justice from Brent Council for the Counihan family, who have been victimised by the actions of our council support agencies. We will be demonstrating outside Brent Town Hall, Forty Lane, Wembley on Monday July 16th at 6pm ahead of the Brent Council Executive's Meeting. Your support will be appreciated.

Isabel and Anthony Counihan and their five children, Vinnie, Aidan, AJ, Orla and Sarah, have been shunted out of the Brent to temporary housing in Ealing where they have been left since April2011 waiting for the Council to even make a decision on their situation, let alone re-house them in Brent.

Their story is an extreme and devastating example of the way lives are being ruined by benefit cuts, and the refusal to build council housing and regulate the private housing sector.  We are living in times when the powers that be think they can get away with punishing working-class people for the fact of our being poor.
Across London poorer people, especially young people, are being pushed out of the city to make way for the better off. Glenda Jackson MP's response to the family's plight was “you can't afford to live in London”. This has been echoed by council officers: Brent Housing Advice advised the family “they could afford to live in Wales”.

We are saying to Brent Council that they must immediately find the family appropriate, secure and really affordable housing in the borough -and put an end to the unbearable stress and hardship that would have totally broken many people long before now.

The Counihans have nothing to justify -their need is clear and we support them unconditionally -but their story may help illustrate how the council is failing in their moral and legal responsibility to assist people in difficult circumstances, but instead mounting attack after attack to remove people from the area.

We ask you to join us in supporting the Counihans and invite other people facing similar injustices to come forward and challenge together the vicious policies and practices of the council.

For more information, to support the Counihan’s, or raise your own issue contact:

David Cameron and his cuts are evil.

This is what happens when people put rubbish in 10 downing street and the houses of parliament.
they cause a overwhelming stench.

all politicians are evil...enough time has passed and enough have suffered under their rule to leave people in no doubts about their true nature.
I could see a war breaking out in this country because of what those wicked hypocrites are doing...as for building so called affordable housing...people would be better off looking to ants and bees who despite being tiny in comparison to humans, build much better homes and organize themselves better than these hypocrites in the houses of parliament.

The Counihan Family Battle Bus will be at Kilburn Square on Saturday 18th August at 3pm and The Carlton Estate from 4pm. Contact Jim on 07958 157392
website - http://familyonthestreet.posterous.com/
email - familyonthestreet@gmail.com