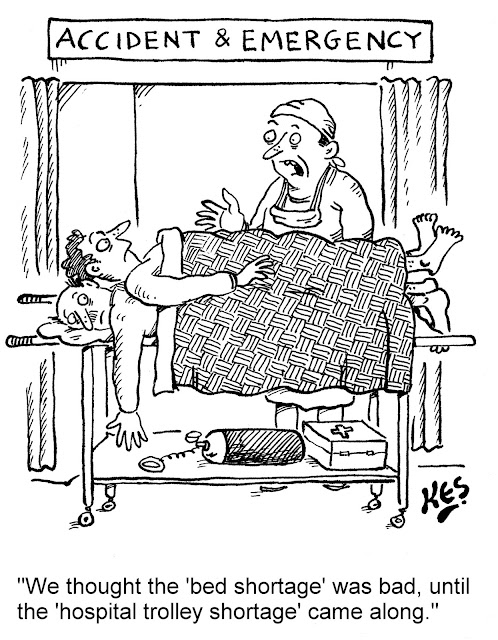 Brent Green Party member, Pete Murry, was recently admitted to Northwick  Park Accident and Emergency ward. In the following Guest Blog Pete reflects on his experience which raises issues of concern for what the future holds if Central Middlesex and several other neighbouring A&Es close.


At about 7.30 pm on Monday 9th July 2012, I was told by a member of the STARRS District Nurses, (based at Central Middlesex Hospital), that based on my blood tests, STARRS and my GP had decided to have me hospitalised by ambulance. I assume that this was because my mobility was very restricted at the time and that this was the quickest way to get me to hospital.

The ambulance arrived at my house in Dollis Hill at about 8pm.  I asked the ambulance crew if I would be going to Central Middlesex Hospital, as this was where I had gone when I had been hospitalised previously. I was told I could not go there as the Accident and Emergency Department CMH closed at 8.30pm. It was therefore decided to take me to Northwick Park Hospital in Harrow.

The ambulance arrived at Northwick Park Accident and Emergency at about 9pm. I was wheeled into the hospital lying prone on a stretcher accompanied by two ambulance men, the three of us immediately joined a queue of other potential A and E patients on stretchers or wheelchairs, each also accompanied by ambulance crews and sometimes also by friends and/or relatives. As far as I could make out in the queue in front of me consisted of about six or seven patients and others were frequently joining the queue after me.

I don’t recall any of the other patients in the queue shouting out, crying or giving any indication of being in great distress, so I have no idea if there was any procedure for emergencies to go to the front of the queue. If such procedure existed it would have made the wait of the “more routine” patients longer.

The restriction that was causing the queue seemed to be the number of available curtained –off A&E treatment areas available, until one became vacant, patients had to queue. When an earlier a patient was moved out of one of these treatment areas, a patient from the queue could be moved into it and also then be formally transferred from the care of the ambulance crew into that of the A and E Department.

I don’t know, but I assume that as well as arriving at Northwick Park A and E by ambulance, potential patients may have been arriving by other means.

By about 9.55pm, I was at the head of the queue, at this stage the member of A and E personnel in charge of handover ‘re-designated’ two Gynaecology rooms as being empty spaces available for A and E admissions.  I was wheeled into one of these rooms by about 9.58pm.

The ambulance crew who had had charge of me until then explained that if a patient was logged as waiting for one hour, this became logged as an “incident”, which apparently meant extra paperwork for both the ambulance crew and the A and E staff.

Within about 15 minutes I was moved from the Gynaecology room to one of the curtained –off A and ;E treatment areas and the use of the Gynaecology rooms seems to have been a temporary ad-hoc measure to deal with the queues of ambulance patients, but it was taking place at 9pm on a Monday night when there were no adverse conditions or unusual events adding to the number of potential A and E admissions.

After my wait in the queue, I was not fully tested and assessed in A and E and transferred to a ward until about 2am, but I think I was dealt with as promptly as possible by the A nd E staff. My concern is how much of the initial wait before I was assessed by Aand E was due to Northwick Park A and E having to deal with extra cases such as mine who might otherwise have gone to Central Middlesex Hospital.
It seems that the run down of Accident and Emergency  facilities at CMH, (let alone their total closure), may displace demand onto other facilities which may not have the capacity to deal with them promptly. Further more the reduction or closure of CMH Accident and Emergency  a ‘self-fulfilling prophecy’ in regard to ambulance admissions, because ambulance patients have to go where they are taken, which may not necessarily be the nearest or best source of treatment.

If an ambulance can’t take a patient to a closed facility does this show a lack of demand for the facility that has been closed?