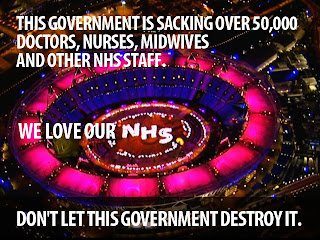 As public concern and anger mounts about the closure of Central Middlesex Accident and Emergency, North West London NHS is holding an open day on its proposals called 'Shaping a Healthier Future', renamed by some as 'Dictating a Dangerous Future'  as it includes no option of keeping Central Middlesex A&E open. It is likely that the closure will lead to the eventual down-grading of the hospital.

This is their blurb:

The event is part of major public consultation programme taking place across North West London this summer Views are being sought on clinically-led proposals to improve healthcare for nearly 2m people in North West London in response to changing health needs, medical advances and rising standards.

Everyone will have the chance to learn more, put questions to the programme’s clinical leaders and fill in the consultation response form when the ‘Shaping a healthier future’ consultation roadshow comes to Brent.

It will be held at Patidar House, 22 London Road, Wembley, Middlesex HA9 7EX from 2pm to 8pm and will be attended by local clinicians and members of the programme team who will be on hand to talk local residents through the proposals.

A further roadshow will be held in Brent on Saturday 29 September from 10am - 4pm at Harlesden Methodist Church.

Hopefully, people attending will test the idea that we need a lot fewer A&E hospitals in London, with a higher turnover, for doctors to build up clinical expertise, and with facilities and on-site consultants available 24-hours a day.

If that is so, the we are reduced to a NIMBY campaign of whether Northwick Park or West Middlesex A&E should be the one to close.