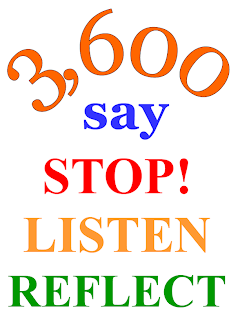 Although we don't know precisely what led to Galliford Try withdrawing their planning application for the redevelopment of Willesden Green Library Centre, it is likely to be a combination of the scale of local opposition, internal Labour Party debate, technical and legal risks; and national and international opprobrium.
The reason given for withdrawal was to allow for more consultation and a possible redesign which amounts to a victory for the Keep Willeden Green's demand to 'Stop, Listen and Reflect' (above)

Whatever the detail, the successful mobilisation of local opinion by the energetic and resourceful  Keep Willesden Green campaign, which saw the council's planning department deluged with objections to the plans,  must have played a part. Thus, last participants in last night's well attended meeting of the campaign allowed themselves a modest celebration at the planning application  withdrawal whilst recognising that this was only the end of Round 1.

It was a sign of the strength of the campaign that the meeting included about eight newcomers who wanted to contribute to the next phase. Rather than tailing off as a result of the pause in the process, the campaign has drawn strength from the decision and become even more determined to influence events.

The consensus that emerged about next steps  emphasised a positive, proactive approach that will seek participation in the formulation of new plans from the start, aided by the provisions of the Localism Act. In reaction to new council leader Muhammed Butt's stated desire to work with the community, rather than against them, KWG will seek a meeting with him to discuss the way forward to ensure that any development meets the needs and aspirations of the local community.
Posted by Martin Francis at 08:35:00