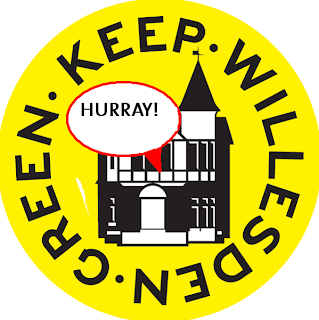 GLA planners, advising the Mayor,  have acted before the bulldozers move in, at least as regards the Old Willesden Library.

It can now be revealed that Strategic Planners at the GLA  met with the Galliford Try application team twice during the 6 week consultation period during which the they considered whether the Willesden Green Redevelopment application  complied with the London Plan Policy.

According to Gemma Kendall, Case Officer,  in the meetings before the July 4th deadline, the planning officers:


...expressed serious concerns that the proposed scheme would not comply with the London Plan Policy 7.8 and 7.9 regarding heritage assets and heritage-led regeneration. The applicant subsequently chose to withdraw the application before it was reported to the Mayor on 4th July 2012.

Galliford Try, in what appeared to be a surprise move, withdrew their planning application for the Willesden Green Cultural Centre on July 4th.

It now appears that the combination of unprecedented local campaigning, massive public rejection of the plans,  the views of the GLA planning team and not least the Town Square application combined to force withdrawal.

Meanwhile, appearing to have learnt little, the application team have arranged a consultation day on the revised application in the middle of the August holidays!

Who are these people who can afford to take the whole of August off on holiday?

What a stupid comment. What the author of the blog clearly meant was that many people would be away at some time during the month of August. I was on holiday for two weeks and therefore missed the presentation on 8th August. Clearly Galliford Try and Brent Council deliberately timed this presentation so that the least number of people would come, but later they could claim that everybody 'had the opportunity'. Wake up John!