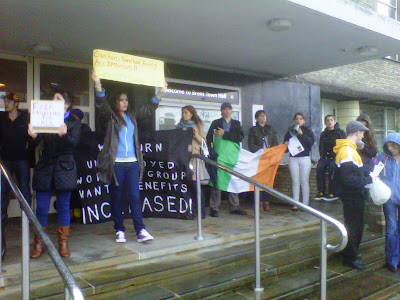 The housing crisis came to the steps of Brent Town Hall yesterday evening when the Counihan family and their supporters demonstrated as the Brent Executive met to rubber stamp a series of far reaching decisions.

Their reception was mixed with some members of the Executive wanting to find out about the  family's plight while others told the family that  they had no choice but to move out of London in order to get affordable housing.

As the benefit income cap and housing benefit cap bite, along with changes in council tax benefits, more and more Brent families will be suffering the same fate. Although the demonstrators recognised that the changes have been brought about by Coalition Government policies they did expect more of a fightback on behalf of Brent residents from a Labour Council, rather than acquiescence in disastrous policies.
Posted by Martin Francis at 08:36:00

the Counihan family get my sympathy but I would not have advised them to demonstrate outside Brent Town Hall because it will not make any difference because the government are pressing ahead with the reforms no matter who it hurts.

Any suggestions for how Brent could 'fightback' against massive cuts from the centre?

Recognise and publicise the impact on local people, work with other London Labour Councils to campaign against them, get the Labour Party leadership nationally to mount campaign with trade union and community support - for a start.

I want to express my outrage at the tone and content of Hannah Bewley’s report on the Counihan family and Councillor Long’s attitude. Instead of reporting on the plight of this family Ms Bewley put forward all the excuses that Cllr Long made on why Brent could not and would not do anything to help this family. In fact in conversation with Cllr Long before the meeting she made light of their problems, said that the Council had 18,000 on the waiting list and were they trying to jump the queue? (with a broad smile). Of course it is all the fault of the Coalition, they object but “only carrying out orders” won’t do. A Labour Council must oppose and mobilise the workers and Labour party members to fight these attacks.

Nowhere in her report or in Cllr’s Long’s comments is it acknowledged that Brent Council has a legal duty to house those who are homeless through no fault of their own and our legal advice is that the Council is acting illegally, they are failing in their statuary obligations and it is outrageous to say that they will have to wait 62 years for accommodation. Anthony has worked with me in Cricklewood bus garage on and off for about a dozen years. That a working man is told in this brutal and callous manner to please leave the borough (“you and your family can F*** off!, others have left the borough without making a fuss like this, why don’t you?” is more like the message).

Council Leader Butt met Anthony and Leslie Ryan from the Irish Advisory Centre at the London Irish Centre in Camden and agreed to examine the case personally. We hope he will do better than Cllr Long.