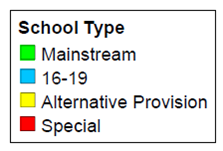 The list of approved free school applications published today  does not include any in Brent. Of the102 schools:
Interestingly Education Investor, the website of people expecting to make a profit from education stated:

It remains unclear how buildings for the new schools are to be funded, however. Capital funding for the projects has yet to be decided, and government advisors said it was too early to comment on specific projects.
Government figures show that the average capital cost of the first wave of free schools was expected to be between £4.6 million and £5.4 million. If repeated, this would mean that buildings for the 152 schools still in the pipeline would cost upwards of £700 million.
Last November, the Treasury allocated £600 million to the programme.

Just think what the local authority system could do with that £700m!