After the GLA plenty happening in Brent next week. 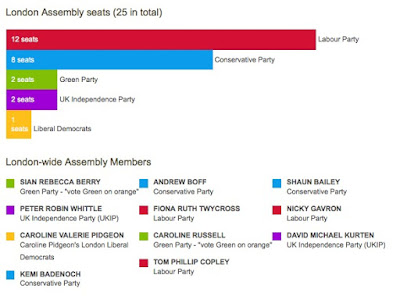 These are the final results for the London-wide seats on the London Assembly. I am sure that Sian Berry and Caroline Russell will do a good job in getting the Green Party's concerns on the Mayoral agenda but it is a pity that Brent's own Shahrar Ali will not be joining them. A few more votes of 'Green on Orange' would have secured a seat for him at the expense of Ukip to the benefit of Londoners.

However now it is time to turn our mind to other issues including the preposterous attempt to push through several major controversial multi-million planning applications at TWO Brent Planning Committee meetings to be held next week before Saturday's Labour AGM.

That AGM may also see the airing of leadership issues as well as changes in Lead Members and committee memberships.
Posted by Martin Francis at 09:55:00