I have received this from Sonia Shah. The petition can be signed HERE

I am a resident of Wembley, and an active member of resident-led campaign Keep Wembley Tidy. I would appreciate it if you could spare a minute to take a look at my petition, and circulate/publicise it. There is a great concern for public safety at Wembley Stadium and the surrounding area. 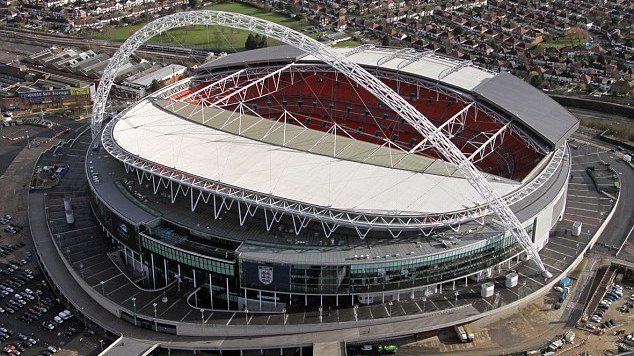 Brent Council approved all 5 planning applications related to the Quintain-owned lands around Wembley Stadium in just a single planning committee meeting on Wednesday evening. This is in spite of two councillors not being in attendance (under legal advice) and a third leaving before the final item was addressed. The new developments include high rise housing, more hotels and more student accommodation (with limited natural light which, according to Quintain, is irrelevant since it's temporary accommodation).

Plans for the car parks were approved last night by Brent Council, along with a scheme to bring 4,850 new homes, 350,000sq ft of new offices and shops, two new hotels, a new seven-acre public park, student accomodation and a 600-place primary school to Wembley Park as part of one of the biggest regeneration schemes in Europe.

Julie Harrington, operations director at the FA, last night told the council’s planning committee the location of the car parks off South Way “created genuine public order and safety concerns which would serve as a retrograde step for the stadium.” She said developer Quintain was ”working from a position to maximise profits” rather than to “protect fan safety”. “The holding of fans, the kettling of fans, that’s a return to the 1970s in my view. Even a short amount of time holding people, irate fans from teams that have lost, or rival fans mixing together is too much.” Ms Harrington warned that the FA “would not be able to attract major events to Wembley if fan’s can’t leave the car park.” “We cannot be complacent about the huge steps forward made in stadium safety in the past two decades. No-one should believe that its acceptable to herd fans like cattle. We must learn from past mistakes.”

The Football Association also argued that more flats by Wembley stadium would cause worrying safety issues http://www.standard.co.uk/news/london/wembley-stadium-tower-block-plan-would-risk-fans-safety-a3245221.html What about the number of new residents needing to see local GPs and the effect on local hospitals? Having already closed Central Middlesex and Hammersmith A & E departments, they are now threatening to cut 500 hospital beds http://www.standard.co.uk/news/health/revealed-london-nhs-chiefs-to-axe-enough-beds-to-fill-a-hospital-in-battle-to-plug-1bn-black-hole-a3244251.html

Councillor Michael Maurice, the only member of the planning committee to vote against the proposals, told the meeting: “Up to 5,000 fans kettled? We don’t want to see another Hillsborough.” (A statement here on the original petition has now been removed by Sonia Shah - see comemnts below)

Objectors are also opposed to the size and scale of seven residential and commerical tower blocks of up to 19 storeys which were also given outline approval. Critics say they could block “iconic” views of Wembley from across London.

What chance do local residents have to try and make Brent Council see sense if they won’t listen to the FA, Sport England and the Department of Culture, Media and Sport?

Brent Council have given the go ahead for another 4,500 more homes in Wembley High Road and another 4,000 by the canal in Alperton.  They are also planning to build flats where the Fountain TV studios are and St Josephs social club (close to London Designer Outlet) is closing, it sits on a nice large piece of land just suitable ..for more flats?

What about public transport?
What about refuse collection – does the contract Veolia have with Brent Council include dealing with waste from all these new homes?
What about services like sewers, water supplies, gas, electric?
What about the environment as a whole?
Brent Council has experienced a torrent of internal squabbles over the last few weeks, and rushing through such proposals, that'll have a huge impact on the surrounding area, is simply irrational.
This petition will be delivered to:
Posted by Martin Francis at 19:04:00

I think that this comment trivialises a matter of very serious concern for many of the residents of the Wembley and nearby area. It is not an issue of which political party you support.

Sonia Shah (who I don't know and have never met) appears to be prepared to set out a view and seek support for it. I can only hope that she does wish to stand as a political candidate - of whatever persuasion.

I don't know her either, and as far as I know, she's not a Lib Dem. I totally agree with Nan.

This development is a total travesty. Yet again common sense gone out the window at Brent Council. The design and impact of these over sized structures around Wembley Stadium is detrimental to the iconic Wembley Stadium. They look out of balance and hideous. Totally ruined the area if this is built!

Brent is Wembley. Wembley is Brent.

Brent want Wembley to be bigger, higher, shinier and dependent on retail and leisure and give not one jot about sustainability of schools, doctors, health and other more dull bits of infrastructure required to host a city which Wembley is fast becoming.

The Mayor has to call this in. The lack of members at the meeting is reflected in the lack of officers writing the recommendations. Absolutely petrified of the might of the developer, without leadership or oversight. Whereas a strong team, with senior backing would take a risk and challenge the developer the position at Brent is quite the opposite.

Good test of Sadiq Khan if he does call this in. Johnson allowed every single called-in development to go ahead in his time in office. We have a right to expect a change in exchange for our support.

Brent is going the way of Barnet, with the same disastrous outcomes. It's the same mess as Brent Cross. :(

Sad to see Michael Maurice infer that the tragedy at Hillsborough was in any way linked to the amount fans had been drinking - the inquiry found no such link.

This point in the petition is grossly insensitive and objectionable in light Hillsborough. Would have signed if it weren't for this.

My sincere apologies, I have amended the petition accordingly.