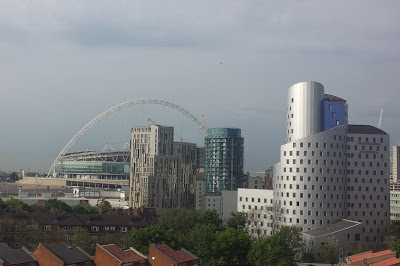 The Football Association are expected to speak at tonight's Brent Planning Committee on the massive planning application for the area around Wembley Station. They have been support by  Clive Beets MP.

Clive Betts MP has written in relation to the proposal following conversations that he had with the Football Association about the proposed developments adjacent to Wembley Stadium. This letter seeks reassurance regarding the potential impact of the development on fans being able to get away from Wembley at the end of the games, about facilities for people with disabilities and about the potential for fans to be held back in “holding pens” at the end of the game.

According to the analysis undertaken by the FA, the development could add two hours before fans can get out of the car park onto the roads leading away from the stadium. This amount of time is unreasonable and unacceptable, and could lead to reputational damage to Wembley Stadium, the FA and English Football and therefore an adverse effect on Brent Council.

The FA have advised that fans with disabilities would take an extra 40 minutes on top of the two hours to get away from the parking facilities that are proposed, which may be a contravention of the Disability Discrimination legislation. It is presumed that an equalities impact assessment will be undertaken.

The FA has also advised that, because of changes to the flow of supporters necessitated by the proposed development, it would be necessary to hold some fans in an area for a period of time after the game had finished. This is a throwback to the problems football had 30 years ago where away fans were held for long periods of time after the games, with football fans effectively criminalised and held behind in certain areas. This would be a disaster both for the image of football, the image of the national stadium and the Council.

Letter of objection from the FA

A letter was received from Martin Glen, Chief Executive of the FA raising issues which are summarised as follows:


The proposals which look to develop high rise blocks close to the stadium will severely damage the iconic view and status of the Stadium.


Whilst regeneration is vital, it needs to be balanced with Brent’s and the FA’s duty to protect the spirit of what is a great venue.


Wembley is a part of a national identity and positive celebrations of this should not merely be unhindered, but enhanced.


The aim of the FA’s objection is to retain the visual power of the stadium to help stimulate every aspect of life in Brent, retaining the emotional response Sir Norman Foster intended for the stadium.


If the Stadium is to continue to hold a special place in fans’ hearts, it needs to continue to provide a world class experience. All regeneration plans must place supporters at the heart of every day and that development need to ensure their safety and free movement.


Currently the development does not do this. The parking options and pedestrian and traffic flow are not adequate and need to be reconsidered to ensure Wembley Stadium remains the best venue in the World.
Posted by Martin Francis at 09:45:00

Is that silver pepperpot thing (right foreground in the picture) part of the government's new G4S prison-building programme?

Clive Betts lists his interests as:
Local and regional government, housing, planning, regeneration, transport, sport
http://www.parliament.uk/biographies/commons/mr-clive-betts/394
As an MP for the city in which the Hillsborough stadium resides, he would be more aware of health and safety implications in relation to soccer than most people and would therefore, I reckon, make a great adviser on such matters -- at least, a more credible witness than a corporation based the other side of the Atlantic.