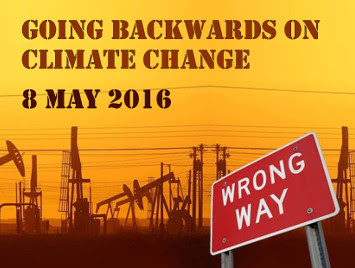 “Instead of making excuses tomorrow to our children and grandchildren, we should be taking action against climate change today.” said David Cameron at the Paris climate summit.
On Sunday 8th May the Campaign against Climate Change will be joined in London by Vivienne Westwood’s Climate Revolution, families and many others to challenge Cameron to explain to their children and grandchildren why his government has spent its first year in office going backwards on climate change, including dramatic cuts to funding for clean energy and warm homes. The message will be brought home in an original protest style: a backwards march down Whitehall exactly one year after the Conservative government took office.
Other ‘Going Backwards’ protests will be taking place the same weekend in cities including Bristol, Leicester, Leeds, Nottingham and Manchester.
Protestors in London will be assembling at Nelson’s Column, Trafalgar Square from 12pm.
“Record-breaking temperatures and a melting Arctic might seem a long way away from the UK but the impacts of climate change are here now, and we’re running out of time to act” said Suzanne Jeffery of the Campaign against Climate Change. “People hit by ‘once in a generation’ winter floods in Somerset, York, Cumbria, and other vulnerable parts of the UK are all too aware that things are changing.”
The action will link together the different ways the government has backtracked on climate action, and the harmful impacts these policies are having today. Colourful performances, staging and poetry, will bring the issues to life and challenge Cameron and Osborne to live up to past promises.
Esther McWatters from Bishops Stortford said “Having children motivated me to start campaigning on climate change, for example helping local schools put solar on their roofs. To find out that George Osborne has just cut over a billion from solar energy and given the same amount in tax cuts to oil and gas companies is shocking.”
Campaigners will highlight the government’s short-sighted infrastructure policy, including spending a planned £15 billion on new roads, while bus services are cut. “Air pollution is now a public health crisis across our country with 40,000 people dying prematurely and children and the elderly the most affected by breathing toxic and illegal air,” explained James Thornton from ClientEarth. “ClientEarth will take the government back to court because of its failure to clean up the air we breathe and we are going to show them people want action.”

The threat of a new runway at Heathrow is a key issue for London. This is expected to breach the UK’s climate limits, producing the same carbon emissions as the whole of Kenya, as well as bringing noise and air pollution to the local area.
Another health concern for both families and older people is the impact of cold and damp homes. The UK’s houses are some of the worst insulated in Europe but funding cuts for energy-saving measures mean the rate of improvement is just a fifth of what it used to be.
“Homes that leak heat are bad news for our fuel bills, damaging to our health - last winter 15,000 people died from living in cold homes - and also very bad news for the climate” said Becky Methven from Fuel Poverty Action. “The cuts to public funding really are terrifying.”
Frack Off London, Talk Fracking and Vivienne Westwood – backed by a spirited anti-fracking choir – will address the latest fracking information and underscore the very serious mistakes being made by our government trying to push through fracking in the UK.
“As the government blocks the cheapest forms of clean energy – onshore wind and solar, other countries are benefiting from new technologies. Green jobs are lost while money is wasted on subsidising dirty fossil fuels. Ultimately this means that as the planet heats up we are missing that vital window to act on climate change” said Claire James from the Campaign against Climate Change.
The protest is supported by organisations including Greenpeace, Biofuelwatch, War on Want, Campaign against Climate Change, Campaign for Better Transport, ClientEarth, Climate Revolution, Fuel Poverty Action, Global Justice Now, HACAN, Plane Stupid, Frack Off London, Reclaim the Power, the Solar Trade Association, Talk Fracking, Time to Cycle.